Another Notch on the Bedpost!

It's my birthday today, another year older and, ahem, wiser...?

Judy woke me up at four in the morning with a basket of presents all to do with my fishing welfare this coming winter. A thermal base layer, socks and a pair of Barbour fingerless woolen mittens to replace those eaten by the dog last year, a set of four rechargeable handwarmers, a packet of wine gums and best of all, a sausage roll....


Then she gets all bashful and retrieves a hidden certain something from behind the curtain. Looks like an old brown canvas rod bag to me ...

Hope it's got an old brown rod in it!

She explains that she got it off an antique dealer - I wince to think of what she paid even before I get it out of the bag!

It's cane, blond cane, and feels to be a soft through actioned blank and fairly heavy duty. I get it all out and assemble it and it feels like a light carp rod, but the butt is very short indeed at 18 inches including the heavy solid brass butt cap and with a screw winch reel fitting, so it's probably a spinning rod of some sort - no, hang on, it's got stand off eyes and the tip eye is tapped to accept a swingtip, and it's at least ten feet long. It's also unmarked. I think it's a rod that has been altered from its original purpose as a long spinning rod to one of heavy ledger duties. Nevertheless, it's a lovely thing and I will find it a true purpose in life, trundling for barbel perhaps? It's certainly strong enough for the job curving right through the blank at one and three quarter pounds test on the scales but the butt will need an extension first otherwise the leverage imposed by even a middling fish would be murderous.

In the afternoon I found the time for a short session up the cut fishing lobs for roach. I put out two rods baited with lobs dug from a local site that is a bit of a discovery, something of an anglers coup. I took a fork to this place just to see if I could dig a few for the session and oiked out no less than six big worms in the first spit and had enough to fill my tin, a fortnights supply in fact, in less than five minutes of very easy digging. 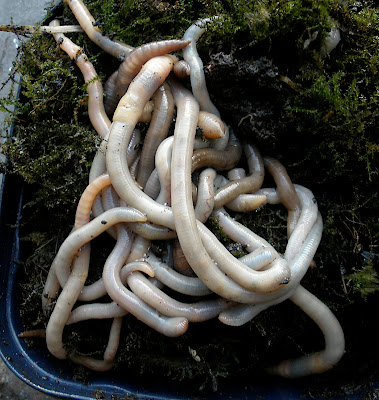 Interestingly the worms were almost white in colour with just the tips of the heads a pinkish brown - very unusual, and I thought quite exciting, because you see, one of the very best and most expensive baits for sea angling is the white ragworm. This is a match winning bait and is so highly regarded that match anglers who can't dig their own will pay more than £1 for each worm! I used to dig plenty of them whilst digging for king rag and could afford to use them in one piece but these worms are so costly on the open market that they are hardly ever used alone unless things are truly desperate but rather they are cut into bits and used to tip a cocktail. They really do catch the fish though, and I wondered if these curious white lobworms would have the same effect on the roach?

I didn't have to wait that long to find out. I abandoned my first choice peg due to problems with a chill wind making bite detection almost impossible and then just five minutes after settling into my second swim had a sharp tap on the left hand rod. This bite was missed but I recast to the exact same place and just a minute later the rod was almost pulled in by a take so confident and strong that it could have come from a barbel. The fish bored into the boat track, jagging and gliding, and then came to the surface where it revealed itself as a respectable roach. I always use a long landing net nowadays, it gets the roach in quicker than a short one - it won't rid you of the risk of losing one at the net of course, but it really shorten the odds in your favour and that's why match angler invariably use a ten footer !

It was safely netted... 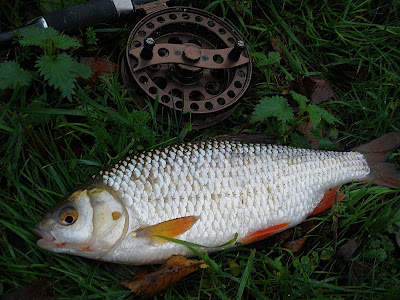 Another good roach on lobworm...

Another pound plus canal roach falling to a lobworm! That's the eighth taken on this bait now and with no less than seven above a pound and some approaching two, it's an amazing average.

After this the bites came thick and fast, the worm was in the water and within a few minutes the tip would twitch and it was fish on, but all I got from then on was perch. Bugger, the white lob was obviously a killing bait but it was perch, a fish that I had thought were going off the feed as the winter approached who were now jumping on the hook and denying the roach a look in! They were bigger than the canal average perch though, which was some small consolation! 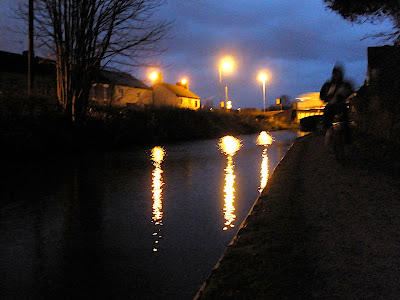 Dusk, and a passing cyclist

Then, as darkness fell the perch disappeared and all was quiet. This was the very time when the roach would have moved back in to snack on my magicical white lobs, I'm sure, but unfortunately that was just when I had to go. Birthday party to attend, drat.