All Creatures Great and Small...

A near blank saved at the last...
Come on now, own up, who nicked all the fish?

It was a toss up on Saturday morning where to fish for the day, heads the Blythe and tails the Avon. Flip a tanner in the air and it falls head side up, so Blythe it was
and that was fine, I'd go see if that peg where Kev had contacted some rather good roach last time out would produce any more of the same stamp and hopefully better, for me.

It looked so good as I crossed the footbridge. A bit more water than recently and of a nice green hue. Just perfect. 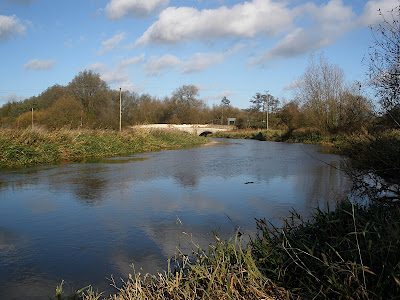 Morning on the Blythe

My chosen peg was right at the very end of the stretch and quite a hike across the water meadows but I was full of optimism and so my step was light and brisk. On the way I met a couple of anglers who'd been there since eight in the morning on their very first trip to the Blythe but without a single fish so far, but loads of 'funny bites'. Crayfish, I informed them.

Oh dear. Not a good sign. No fish between two anglers in three hours meant either that here were a brace of exceptionally bad anglers, or that the river was sulking.

It's no use me describing, blow by blow, what occurred next so we will fast forward to late evening and skip the seven hours of daylight twixt because in all that time I had not a single bite to float or lead, on worm, maggot or bread. Straight rods, dry nets, slack lines... 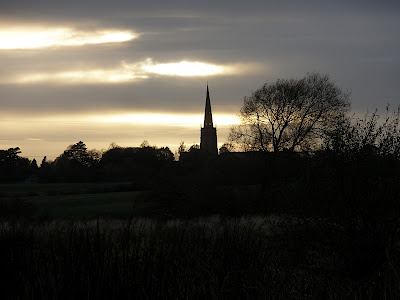 Evening on the Blythe

Now I hate drawing a blank and thought that the hour around darkness would be my only chance to catch anything on such a day as this, and I was absolutely determined not to have to go home without catching and therefore learning something. Swim choice was easy - the only likely peg in a mile of water that I had not already tried, the one right under the footbridge at the very start.

I set up in the peg and for no real reason at all, started singing 'All Creatures Great and Small', out loud, in the chill evening air. I could only remember the first few lines so had to stop when the words ran out and start over. I really thought the day had got to me by then...

Amazingly, as soon as I cast, fish started to top and I had not seen anything top all day long so this was now looking hopeful!

No bites came unfortunately but when I reeled in found I had my first fish of the day, a dinky little minnow!

Hoorah, not a blank after all! I'll certainly take a minnow over nothing! 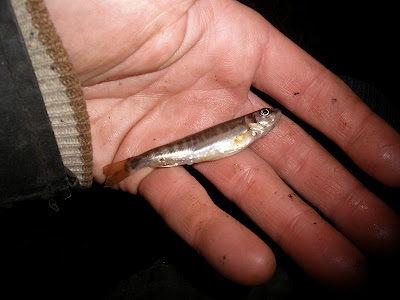 The little fish wriggled off the hook and fell to the grass so I put the rod in the rest and carefully retrieved it, took its snap and threw it back. I went to rebait the hook and found another minnow had taken the maggots that had been dangling in the water!

At last, a shoal of feeding fish!

But then it was all over, my pick up was coming and I'd have to give up the minnow bonanza before time.

I reeled in and on the hook was another tiddler!

A miller's thumb!! A bullhead! and the first I'd ever seen, let alone caught!! 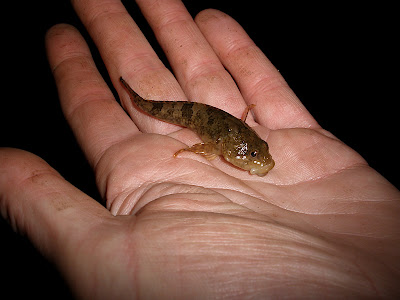 You have to have faith that when fishing, no matter how bad things are, all will right itself, as it so often does. When creatures small show up at the end of a day of exhausting and quite pointless fishing for creatures great, they seem so precious, like little jewels sparkling in the light of the lamp.

Perhaps it takes such a dire situation to force the proper appreciation of them?