The local patch is under seige! The local anglers are up in arms! The local gossip is of someone blowing cover! The local culprit, is me!

I tried in the beginning to disguise the location, but small details in words and pictures gave the game away. I succeeded for some time, well, some little time. Then anglers started to appear who'd never been seen before and before long the word was out and spreading like wildfire — yes , it was indeed possible to enjoy a days fruitful fishing on the Coventry Canal ! 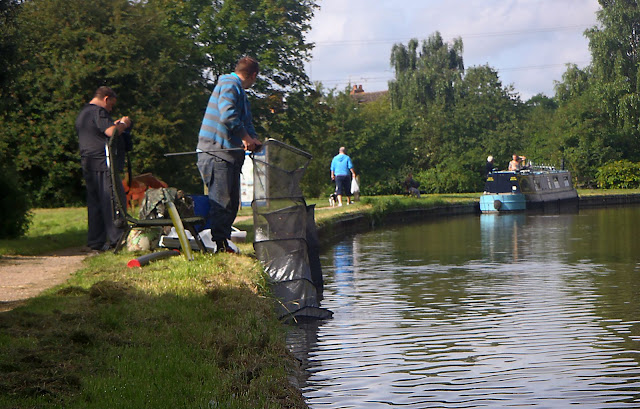 Yesterday morning I went out and found my favourite peg occupied by two anglers. Now it wasn't the fact that my favourite peg was occupied that I found interesting — it often is filled by anglers fishing it blindly — it was the fact that the two anglers filling it were fishing with the right bait and to the exact feature that more or less guarantees serial catches of bream and tench there. That was the secret of the peg that I worked hardest to disguise (but not hard enough!) because fishing away from that feature and using the wrong bait, more or less guarantees less than fruitful results.

The earth is not yet down to a muddy rut — the peg is still a lush green sward of grass. However, it's out of my hands now. Where just a couple of months ago it was possible to turn up and guarantee that the spot would be vacant, now it is most unlikely. Every day I walk the canal and pass the spot, and every day it is occupied by someone new. It is becoming one of those swims where to fish you must get up at the crack of dawn to be in with a chance.

It's the price I have to pay for publishing my results so widely and openly. But what's the alternative when the secret of writing a blog that is actually useful to people and not just a pulpit to brag from, is in the giving away of all and everything, for free and gratis? A good read is a good lead. Details will be pored over and clues will be followed up on. It's an enjoyable game.

Trying to hush things up just doesn't work in the long term because people do know how to extract the marrow from bones thrown them. I certainly do. So don't publish 'mistakes' if you want to keep your waters secret from me!

But can't afford the ticket and the travel...

Yesterday morning saw a grand total of 7 anglers fishing along just 100 yards of towpath, including myself, and that's a rare, rare sight on any canal nowadays. Do I mind? Well, not really. It's good to see the canal being fished regularly and people are queuing up not for specimens (though the secret-squirrel specimen fraternity will black ball me forever after this... oh, black balls to them!) but for a bit of free pleasure angling outside the confines of our over-priced and over-rated commercial fisheries. So good luck to them all.

It's all to my advantage to be fair, because the anglers who come to fish have mouths too, loose ones usually, but ones that can be prised open with the tease of a little extra information, no matter how tight lipped. I get to learn by their successes and their mistakes. I also get to see or hear about the contents of their keep-nets.

Haven't seen any silver bream yet, though... 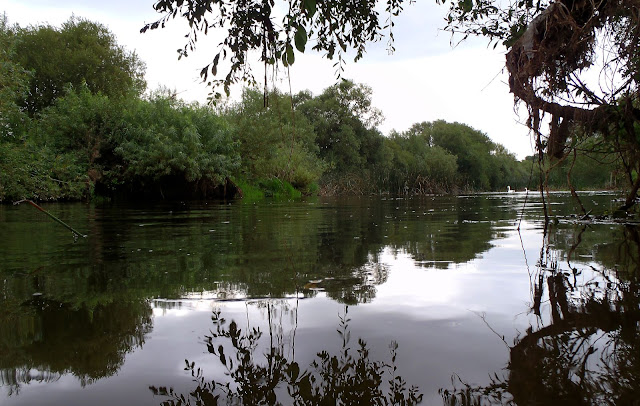 The Warwickshire Avon is under-fished. Well, under-fished in the sense that 99.99% of its banks are hardly ever or never fished, and 00.01% are fished to death. Take my recent experiences at a certain lock. Just a handful of viable swims available, and those occupied every day of the week by the evidence of the state of the bank. It's the sort of place where queues form. Anglers pitching in second choices, keeping a beady eye on the occupants of their first choices, upping sticks and jumping in when they depart. Doctored photos and anonymous leafy backdrops will never ensure a swim there — it's common knowledge.

Yesterday evening, Martin and I went back for seconds. The prime pegs were of course, occupied. Martin's first choice was free though, and for good reason — it's not the sort of place where you'd go for a comfortable and lazy afternoon's fishing. My first choice was open too, and for similar reasons, it being a muddy hole reached by a treacherous slippery staircase with room at the bottom for one rod and a bait box, but no easy chair.

It wasn't the same swim it was last week though, because the flow had weakened and with a foot less water in it, it felt a foot less promising. I went bite-less. Martin did not repeat his previous captures either, and struggled for one small barbel. THEN, right at dusk and the prime time, the prime swim was suddenly free...

We were in it like rats up a drainpipe. It peed down almost as soon as we were comfortable, and the rods, which we fully expected to be pulled off their rests in moments, remained steadfastly frozen against the anonymous leafy backdrop. An hour or so later we decided to call it a day, because Zena has 'borrowed' my headlamp for her adventures at the Reading Festival, and as more of a fashionable mosh pit accessory than a means of negotiating the night, I might add, and I couldn't function properly without it. Besides, it looked a dead loss. 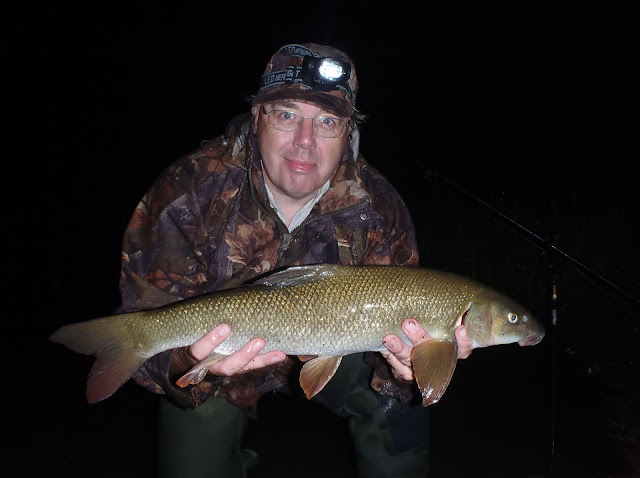 Just as Martin went to pull his rod from the rest and had his hand over the cork, I saw it bend over to the water. He picked it up unaware of the bite and was attached to a surprise fish, a barbel of a four or five pounds. A last gasp bonus.

On the way home, with lightning flashing in the skies towards Coventry, I felt around for items of tackle stowed in pockets, and to my horror found that I'd left behind what is, or rather was, the oldest item of useful tackle I own. To those occupying the prime swim this day — and it will be occupied — please, let me have my 20 year old Gardner Bait Needle back. 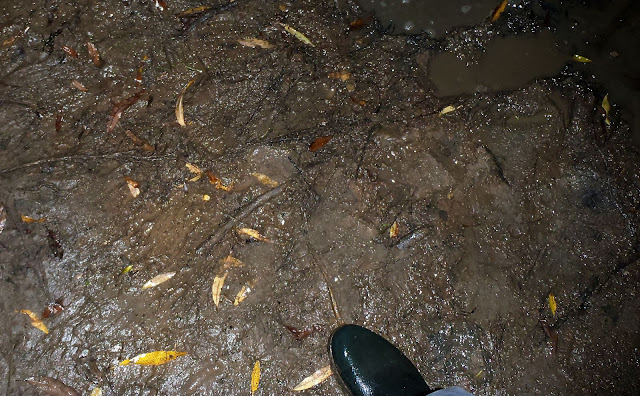 It's beneath your feet, trodden into the Avon's mud. Send it back, and I'll tell you a secret you don't know, if only I can think of one that nobody, or their dog, knows about already.