Let's not beat about the bush with pointless preamble, the first was a either a middling barbel or a good chub, the second either a very large barbel or a feral carp. Both were lost to tackle failure, but both while the clutch was slipping and under what I would term 'half-pressure.' The culprit in both cases was the knot. A tell-tale wisp of compressed and curled mono told how the stresses of the fight, or indeed the stresses of previous 'fights' with weeds and snags, had cumulatively weakened the joint between hook and line, resulting in its inevitable failure.

It goes by the name of the 'knotless knot,' this knot, and it is one of the worst ever tied. I'd assumed it to be both strong and infallible, but it has proved itself neither. It may well survive the rigours of one struggle, it may even survive the second, but it cannot survive for long. It is a knot bound to fail. So, I  roundly condemn it to the oblivion it richly deserves, because if a properly tied and lubricated knot can only be trusted most of the time, it cannot be trusted any of the time. After two under-breaking-strain breakages in ten minutes, I tied on another hook with the palomar knot, a knot that can be trusted every time, for all of time. 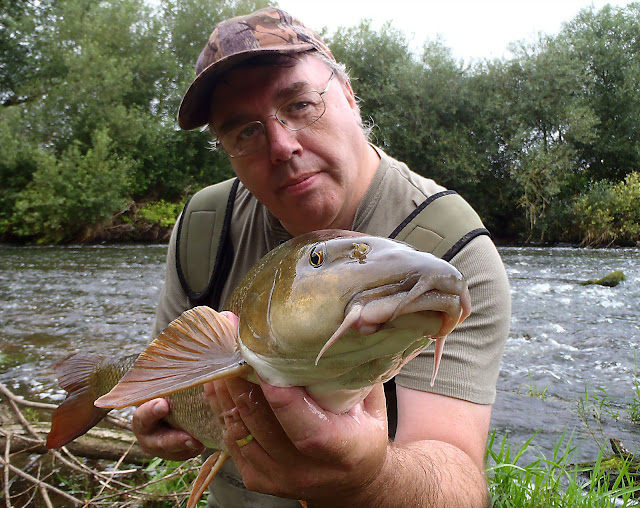 Martin had no such trouble. He went wading to trundle lumps of meat down the fast shallow water along the far bank below the weir, caught barbel, and banked them all. I sat in a hole of a swim down the bottom of a slippery staircase of red mud and went bite-less for the first two hours. Then, the lad who'd occupied my first choice peg all morning, upped sticks and beat a retreat from the incessant boat traffic, so I dropped in his place and fed the swim with small chunks of meat.

This was an almost pointless exercise, because meat is buoyant and minnows like meat, so they played keepy-uppy with it, and half of the freebies went off downstream without sinking more than a few inches through the course of the swim, eventually reaching bottom perhaps 100 yards downstream. I got a few half-hearted twangs of the rod top for my efforts, and wiled away the next four hours constantly recasting and rebaiting, the heat of the day having made the bait so soft that I was resorting to keeping it in place on the hair with short lengths of twig. 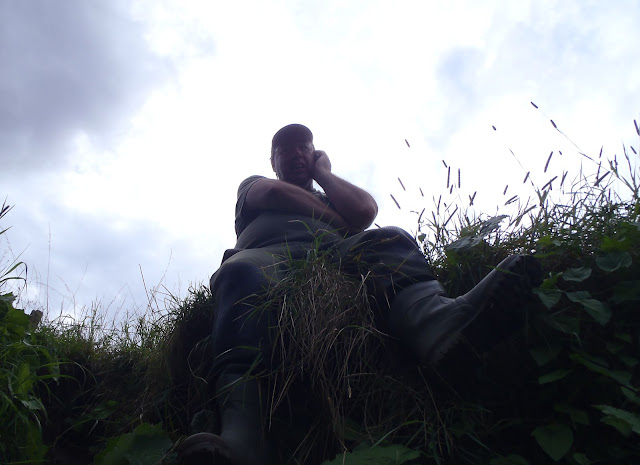 However, every cast left a freebie in place, and on the bottom where it was supposed to be. Not that that made any difference in the end because the swim was simply fish-less and looked like remaining that way, despite looking very fishy indeed. So, I moved back to the original swim on a hunch that the bait I had been trickling in upstream would have landed pretty much in its waters, and might well have attracted a fish or two.  I thought I'd give it a couple of casts at most to prove this hunch either true or false, and then go fish elsewhere, and perhaps not for barbel as the few other barbel swims were occupied. 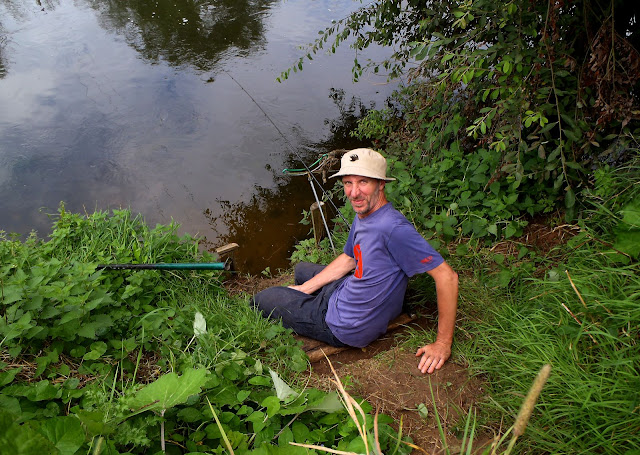 I sat down on the hewn mud step on which I'd placed a handy noggin of wood to sit on, cast out, rolled a fag, sparked up, and the rod wrapped over hard. The strike met with the aforementioned chub or barbel. The fish made a few hard lunges before I teased it upstream with a carefully pumped rod, and then, just as it came to the surface and was almost in range, the knot failed. The rod was hardly at its limit, just a half-curve, and there was no reasonable reason to be found for the failure. It was simply there one moment, and gone the next. The knot had given out, not against a terrific lunge, or a hard fast run, but against the kind of pressure a five-pound bream might have mustered.

I blamed the 10lb hooklink mono initially, and because it has had a few perplexing snap offs against snags near the other end of the hook-link lately, I was ready to bin it, there and then. So, I tied up a hook-link of 12lb mono, and this the same stuff as the mainline. Now there was just the knotless knot , the hooklink and two palomar knots to go wrong, and because palomar knots never fail, and the line used has never broken on me, I felt safe and secure.

The bait was chucked out a little further across the near bank flow and into the slack across the other side, where it settled back into what I thought a perfect position. I was right about that, for ten minutes later the rod top bucked, I struck, and what felt like hooked barge ripped line off the reel at a frightening and seemingly unstoppable rate. It all held fast, and the fish came under real pressure as I applied as much strain as I thought the tackle could bear. The fish came up in the water whilst still ploughing off, then halted momentarily (this is key) before resuming its shocking run in the same direction directly downstream.

Taking advantage of the pause, which can only have been a second or two, I'd relaxed the rod instinctively as I waited for the fish's next move, but as the rod came into its bend once more, the line parted before it reached anywhere near its capacity and while connecting only half the rod's pressure to the fish that it had on the violent initial run. Once again the knot had failed, it had failed just as it had before and in exactly the same fashion, preserving the evidence of its weakness  — a short length of crushed and curled mono at the very end of the break — for analysis. 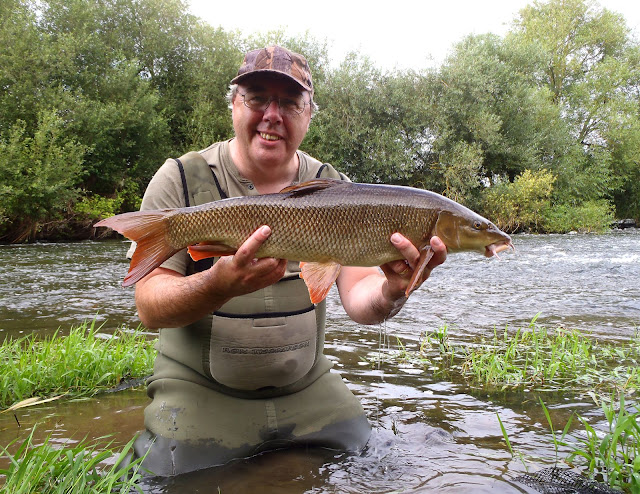 Martin though, was having a whale of a time up to his arse in running water. He banked another two barbel after his first and topped out at just a few ounces below ten-pounds with the last and best of the day. All were pristine fish without a blemish on them. I wasn't at all jealous of his success, or wanting to join him in the fast runs, though Martin kindly offered his sweaty waders for the job, because I had other things on my mind! 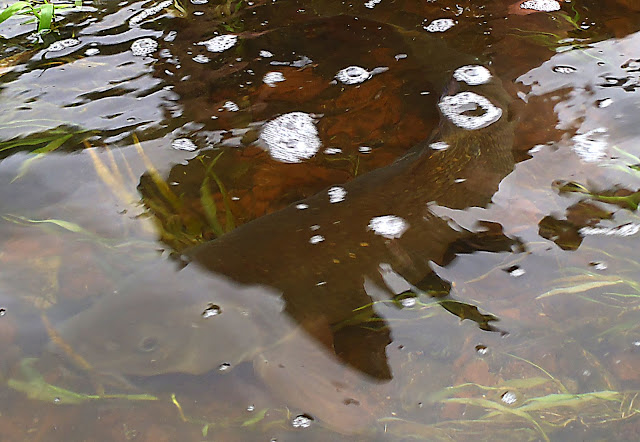 I hate breakage of tackle for reasons not readily apparent or attributable to some identifiable cause. It possesses me. I cannot sleep or rest till I know exactly why things went wrong, and tonight,  I would not sleep soundly till I knew for sure...

Why the knotless knot is not a knot at all.

Tomorrow — The knotless knot reveals its fatal flaw. It ain't what you think it is, but it is, what it clearly is...