What's the last fish you'd recommend a beginner hook? And, what's the first?

Judy's son, Ben, home for a few days in his university summer break, went out fishing with his mates last week. I loaned them a pair of my best rods and reels to share, not having any I'd call 'disposable,' and out they went to a local pool to catch rudd. One of the trio had his own gear and knew something about fishing, but Ben and the other lad had no clue how to go about it.

The more experienced lad caught a few rudd, and then Ben hooked what had to be a carp, because though I was at home fretting needlessly over my loaned tackle, I know the pool and it has nothing else in it that could plough about for twenty minutes before snapping Ben up. Thankfully, I'd set the clutches of the reels beforehand, otherwise his first experience of a powerful fish would have lasted just a few seconds. Nevertheless, carp are not the last fish I'd recommend a beginner hook, nor are they the first.

Yesterday evening, Ben and I set off for the canal where I thought he might be able to bank the first proper fish of his life. He'd caught a few small roach in the past when dabbling in his early teens, but was a proper tyro on the bank now, not able to understand half what I was talking about, mostly because what I was talking about may as well have been spoken in a foreign language without him gaining direct experience of it very soon after. And that's a hard thing to deliver to order, when fishing...

There's no easy way to explain how to do such apparently simple things as casting, without having someone cast in front of you, and do it wrongly. With experience, casting is the last thing you think about, even though casting well is half the battle. It just happens, like riding a bike, or breathing. But to someone new to the game, casting seems an inexplicably complex operation, with hands and fingers attempting things in all the wrong order, and placed in all the wrong places to accomplish them in the first place.

I explained the principles behind the float rig I'd set up for him. The total shot sinks the float, the bottom shot near the hook subtracted from, or added to, the total weight of bulk shot, either sinks the float in water too deep, or shows too much of the tip in water too shallow. The float is set to slide on a rubber so that it can be adjusted up and down to compensate.

These are the first principles of canal float fishing, where water depths vary from one bank to the other, the way I practice it. Ben found all that easy to understand because the effect of getting it wrong was clearly obvious. The casting would have to be a matter of longer experience, but the float was working for him in no time at all, when it was set to correct depth for the far bank shelf, and successfully cast there.

Then it was a 'simple' matter of catching that first fish...

We were both using light gear, though Ben was set up with heavier line and a more powerful float rod than I was for insurance purposes. A bream was the most likely candidate for his fish, a species that Ben would easily handle even without experience. However, bream were neither the first or last fish I would recommend a beginner hook, and I was hoping for something that would be a real accomplishment for him. Something that any angler would rate as a capture to remember... 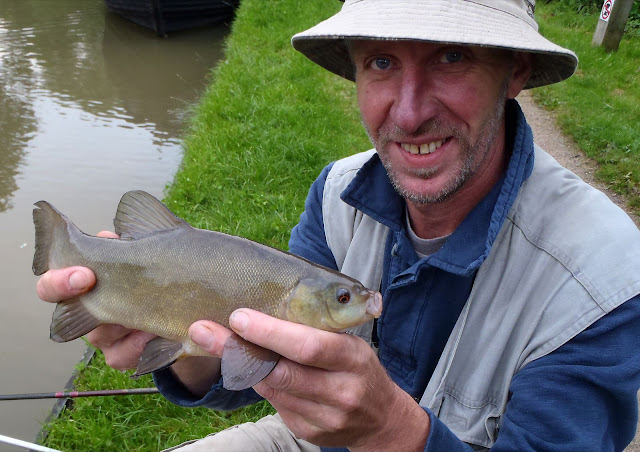 My first bite came by, and along came the smallest tench I've ever caught from the canal. It's great to see the tench successfully breeding and small fish coming through. These are fish for the future, and fish to test the skills of the most experienced among us. Here was a fish fit for Ben, and the first I'd recommend a beginner hook, but, as I sat there and wondered what his first bite would bring, recognised it was also the last...

What if he did hook one? Just a week ago I'd hooked a tench in this very spot too large and powerful for not only my gear, but my experience too. I'd used my recently acquired ABU 506, a closed-face reel, and that a type of reel I'd only used a few times in my life before. The fish was lost because I didn't quite understand the unique principles behind its 'Syncro Drag,' where the handle is wound backwards a quarter turn to give line, and forwards to pick up line, lock the drag tight, and cease giving. Lack of experience with the reel, cost me a fish I'd have certainly banked with my usual and familiar tool -- the well adjusted, easily controlled, and reliable smooth clutch of a modern fixed spool reel.

But, there's no better way for me to master the new reel than up against such worth opponents as tench, and no better opponent than tench to teach Ben the arts of fighting strong fish. I just hoped it would be a relatively small one, if and when it came along... and, because a dogged male tench of even a few pounds might be too much to handle, a female please!

I had three bream in a row after the tench, which was somewhat embarrassing, because every successive one was bigger than any fish Ben had ever seen before, and the biggest he'd ever seen before them was my first small tench. Ben had bites alright, but his strike was mistimed and too weak to hook them. I explained why, and showed how to do it effectively. Once again, a lesson hard to explain without direct experience soon after. 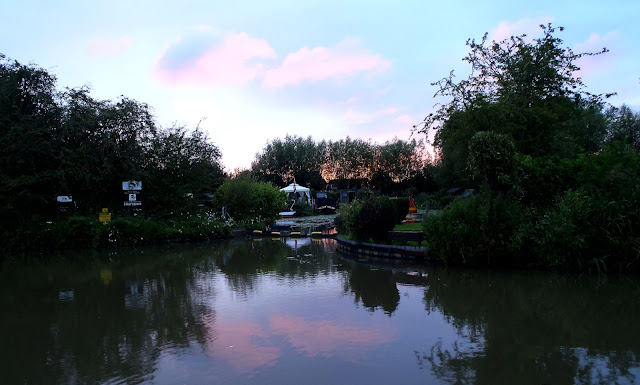 As night fell, it looked more and more likely that a fish would fall to Ben, because the swim was becoming alive with fish grubbing about for the loose fed bread mash I'd pitched in, evidenced by the floats pitching around as fish brushed the line. However, there was a time limit. Ben had a drinking appointment to keep!

With just a few minutes left till his deadline, I'm sitting there urging him on like a seat-edged, union-jack toting fan at the Stratford Velodrome, his float makes off sideways, he strikes, and he's in!

It wasn't a bream. Nor was it a big tench, thankfully. I had to be a tench though, because my instructions to lift the fish carefully to the surface didn't seem to be working as they would have with a lesser opponent. Sure enough, when it finally did rise far enough in the water to catch a glimpse of, it was.

Then, as you'd expect, when the fish realised it was not getting off lightly, it went crazy, running off here and there, and giving us both heart attacks. After a few botched attempts at netting, the fish running speedily around, diving, and at one point clearing the water, I finally got it and heaved it out to the bank. A worthy opponent indeed. A tench of perhaps a pound and a half. 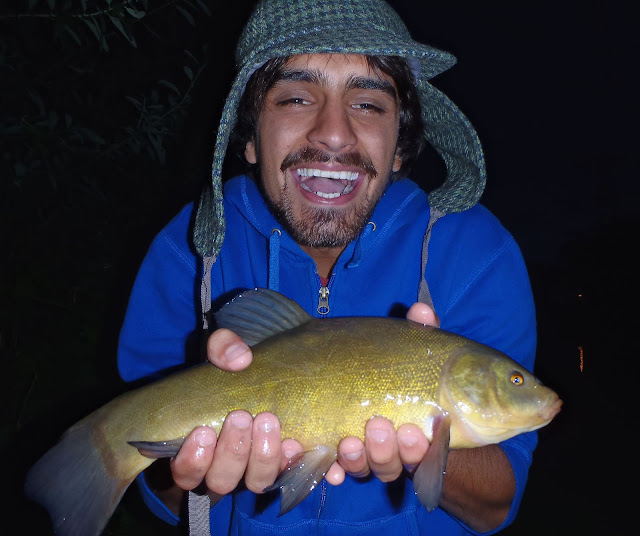 Now such a fish wouldn't raise much of a smile amongst members of the specimen fraternity, but Ben's grin was a mile wide! As was mine...

This is what fishing is all about. There's always something special about the experienced amongst us winning a gong, and there's no medal like the last won, is there? But none after the very first are fashioned from such high carat. 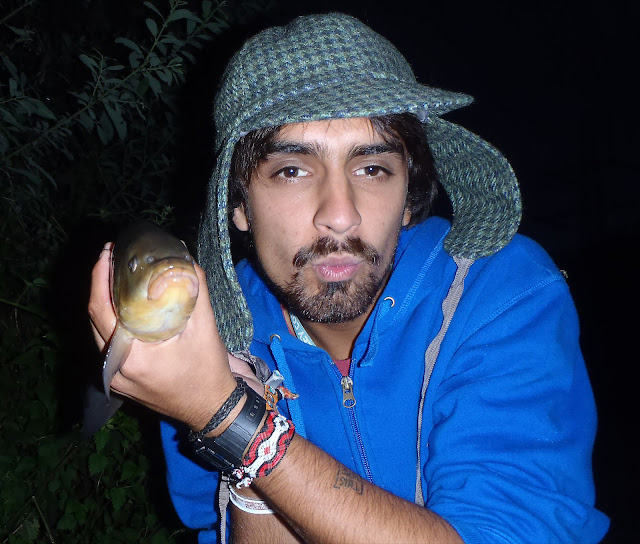 I'm glad I was there to witness it. Reminds me of myself, oh, a lifetime ago now. That was a tench, and about the same size too, but still as fresh in the memory as it ever was...

A medal that'll never tarnish, 'cause it's Solid Gold!