Despite the fact that the swim I found once promised so much, it seems now that it is becoming something of a bore. It was discovered when searching for my first canal carp and finding not only plenty of bream and tench, but some very encouraging silver bream and roach too, and those last species were the real reason I've spent so much much time on it, of late.

Two mid one-pound roach and four silver bream including two well into the pound and a new personal best of one-pound six-ounces, all caught early on and on consecutive forays, had me salivating over what it was capable of, but it seems now that it was a false dawn, because not one example of either species has been caught since. Even the tench who topped out at an impressive (for a canal!) five-pounds eight-ounces, seem to have moved away by degree, and now it's just bream, after bream, after bream.

This morning at 3:30 am, I snuck out the door for an early morning session in a bid to beat the recent interlopers who've upset the local's fishing monopoly. Not that I mind them, just want to get ahead of them on occasion, as you would if you had an issue to press. Coventry have recently replaced most of the sodium lamps in the city with white light under cowls. As a result, the pre-dawn heavens were bolt clear, and moonless, so the Milky Way was clearly visible for the first time I can remember since moving here from London.

I saw a shooting star. A little one though, so it was no omen of impending good fortune. I cast bread under a plain white peacock quill float specially made for night fishing. It has a plastic sleeve glued on into which fits a starlight. It was its first trial, and it worked brilliantly, the white body coming easily to hand in the dark, and the dim red starlight not frightening fish in the shallow water up the far shelf half as much as I believe those brilliant green ones do.

Belief is one thing though, reality another. I failed to get a bite till first light , excepting one, and that was from a signal crayfish — the first I've ever caught from the Coventry Canal, hopefully my last, and what I suspect was the culprit all along of a series of inexplicable bait from hook removals in the recent past. 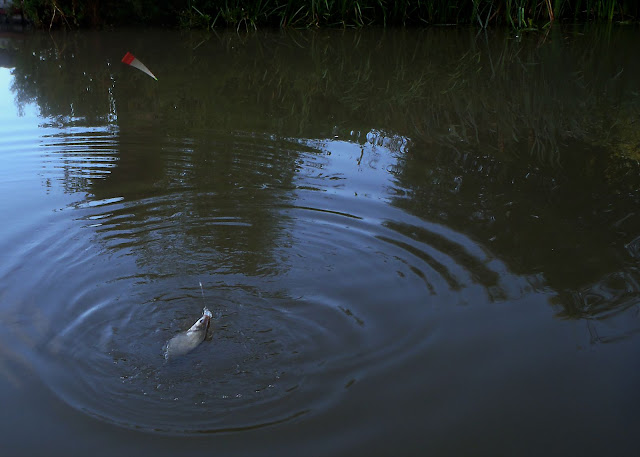 A fish came to net that I have never seen before in my life, and possibly the last fish I ever expected to see in the Coventry Canal. Even as I clapped eyes on it, I knew, from some deeply buried memory, exactly what it was, and what it was was my first ever rudd x bream hybrid. 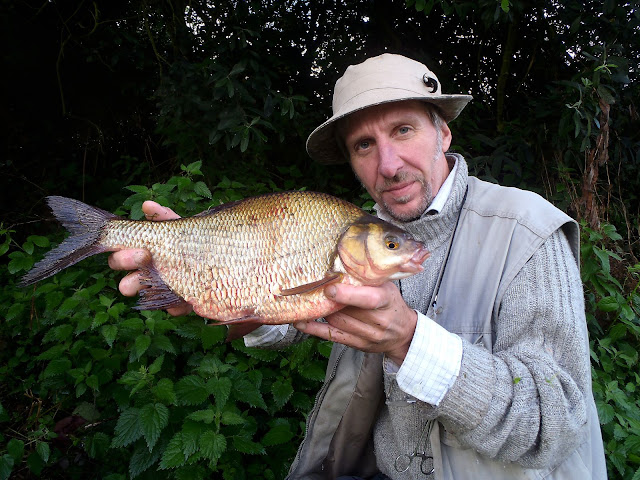 What a strapping lad he was. Pugnacious. Deep and thick set, keeled in the rear, with a tinge of real gold in that yellowish brown breamy flank, an orange eye, and an upturned mouth. Very handsome. Not as handsome or desirable as a true rudd of equal weight would be, of course, but because I'm a bit of a hybrid and freak fish collector, handsome and desirable all the same. I thought he'd go three pounds or more, but he was just under two-pounds, fourteen-ounces. 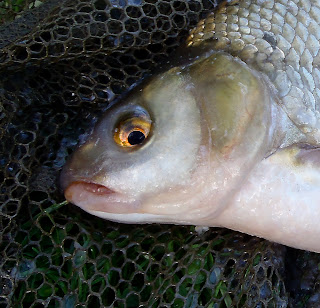 Imagine a rudd of such size from the Coventry Canal, or even from any place in the whole of Warwickshire. There's a few true Rudd in the canal of course, how else would he have come into being? But in four years I've caught a grand total of three, and one of those twice. Rare is not the word.

This fish was rarer than rare, so he more than made up for the conspicuous lack of silvery fish.

I packed down, and then a boat person woke and decided to move his barge past me, my gear, and sunken keep-net. He was very nice about it and sailed around it all in one expert manoeuvre by pulling on a long rope attached to the middle of the boat. From between boat and bank, bobbed up a big roach. 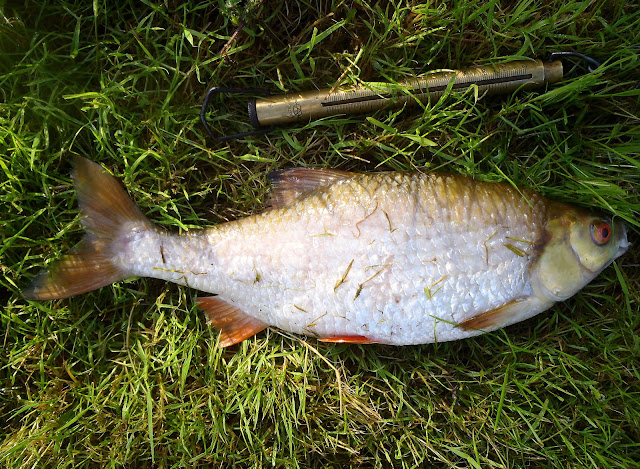 I thought it might make two-pounds for a second, but weighed its corpse knowing it wasn't quite that. Nevertheless, at a pound and thirteen ounces, I'd have liked to have had it on my hook still kicking. I think the poor thing got crushed against the steel revetment on Monday night, because it hadn't been dead very long. It was almost good enough to stuff, if it wasn't quite fit to eat.

Good to see such large roach in the canal though, on my hook, or not. 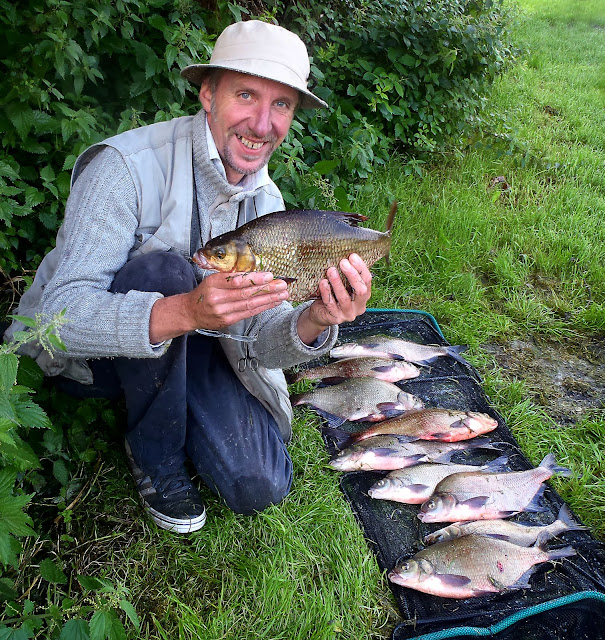 Again, I'd wound up with a very respectable bag of bream and their mixtures between a pound and a half and three-pounds, with an estimate total weight of 22lbs or so. I think though, that it has to end, and I'll have to move on to something else, because I'm starting to repeat myself like a stuck record.

Dunno — hadn't thought about till just then when the thought occurred.

Anything but middling canal bream I suppose, if such a fish is possible to avoid in the pursuit of others like-weight and like-wise in their preferences, but more worthy.