Avon Roach and Silver Bream — A Reason to be Cheerful

I really thought the lean times were over when I first caught a glimpse on my way down the alley back of Lucy's Mill. The lovely jade colour that calls forth memories of times when any fool could have caught and the ever hopeful roach angler had red letter days, today the river looked just right for another.

First port of call was a favourite swim in the first weir pool. This weir has a less forceful push of water than the main weir a little further downstream and unlike it, the force dissipates long before it hits the near bank unless in flood. The cast is from the side, at a right angle to the flow and into the midst of the turbulence where the fish are found in greatest numbers.

Roach are not a fish associated with strong currents but in weirs, sluices and just about anywhere water crashes into a pool that's exactly where they like to be. It may look fierce up top but it's nothing like as strong flowing below so pitching right into the thick of it the feeder sweeps along as it falls through the fast flowing surface but then plunges straight down into the depths. 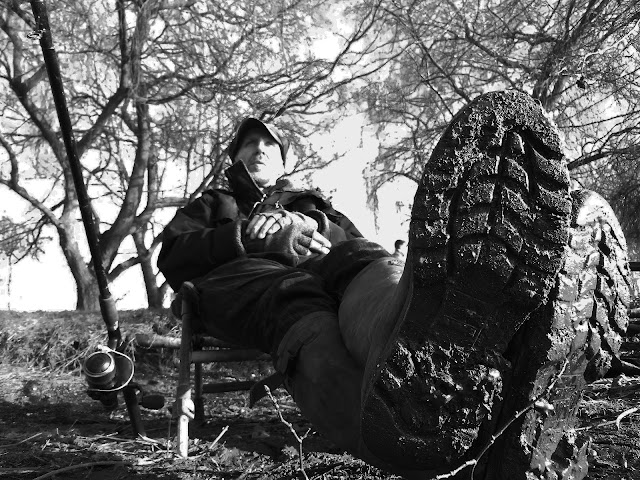 Usually bites are fast to come and continue all day long once the hotspot is found but today I had great difficulty locating it. Casting here and there but finding few in the first half hour and those that came quite peculiar and excessively shy, it seemed clear that the second weir was going to receive a visit very soon.

Then at last I found roach. A classic bite signaled by the tip that I've come to recognise instantly through years of experience because roach do not take ledgered bread like any other fish that swims in rivers. I can't easily explain what's so distinctive about them but it's best to say that all other fish without exception will hook themselves against the feeder should you leave it alone for long enough, but roach will not and require a well-timed strike in every case.

It was hooked and came to the net. A nice roach of three-quarters of a pound, but it had a few scales missing on both flanks — what looked like a failed cormorant strike by the pattern. I put it in the keep net along with a second half the size caught a few minutes later but fished on for another hour or so without much to show for it but more of those queer bites mentioned earlier, when at last I decided I'd had enough and a move was necessary downstream. 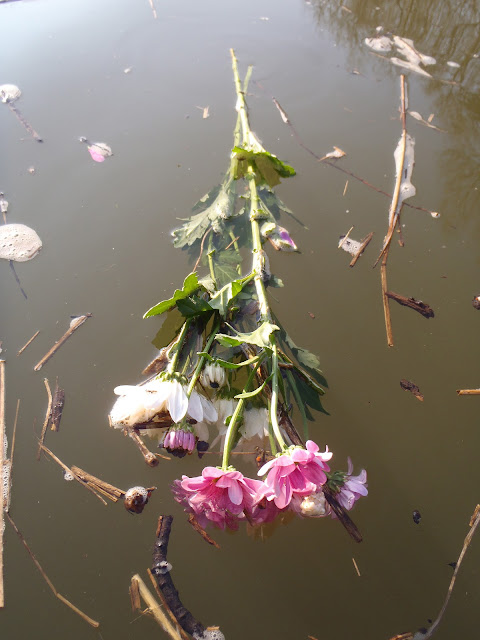 Pulling the net to release the roach, I was shocked to find the smaller fish just as perfect as it was when caught but the larger having shed more than thirty scales now strewn in the bottom. It was such a sorry sight and really very disturbing because I'd never seen anything like it in all my life. I checked the net for tears and holes or sharp objects caught up in the meshes that may have been the source of the disaster but found nothing amiss.

Sure, a grossly overfilled net will certainly produce a few too many dislodged scales for comfort and with a comfortable net of say ten roach, one or two scales might be lost after too many hours staked out so we avoid both situations, but that's not a really serious problem because a fish will grow back a lost scale very quickly indeed.

So many from the one fish though, that must mean infection don't you think if nothing else can be found that could possibly cause it? I just hope it's not the first sign of something more serious afoot in the river at large...


I should have dispatched it and used its corpse as bait for pike but for some reason I slipped it back to the water hoping it might recover naturally which now seems a hopeless gesture even though it swam away perfectly well.

Because it may have been my fault (and however that may be I just don't know) I trudged down to the second weir with all my gear slung about me which seemed very light compared to the leaden weight of my heart.

It's hard to fish on filled with troubled thoughts but fishing without improvement in the rate of bites requires concentration and hard work and so finding them took priority. Soon I'd managed to banish them to the back of the mind where no doubt, later that night they'd re-emerge to haunt some awful nightmarish dream...

Usually this second weir is very active indeed and I'm used to waiting no more than two minutes between cast, strike, fish or miss, but today the wait was well over ten minutes between which I thought most unusual. It was as if roach were not about, even though I knew they really were. When a good bite finally came along it was certainly no roach bite — a twitch and a twang of twelve inches followed by a drop back and series of jerks indicates something that's hooked itself. 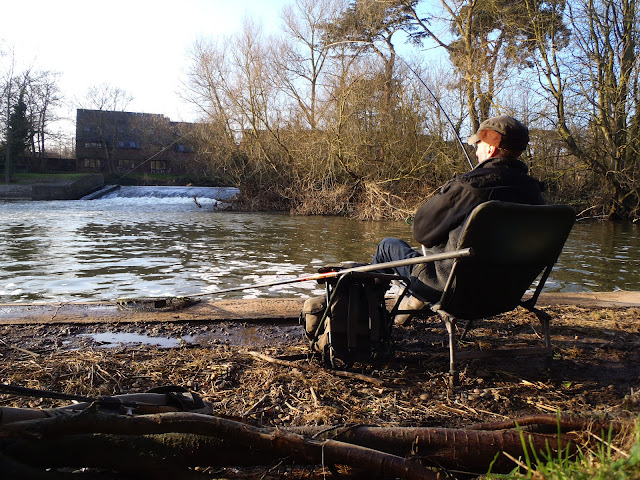 It felt a really good fish though, quite heavy and reasonably strong. I thought "chub" though they're very rarely caught here but something was not quite right about that idea and when approaching the net it slipped the hook I was left scratching my head...

The answer came next bite — same type of bite — twenty minutes later when a silver bream slid into the landing net. It wasn't as big as the first i'd hooked (it was one, that's for sure!) and about average size for the Coventry Canal, but certainly the best I'd ever had from a river and therefore it was something to put half a smile back on my dejected face. 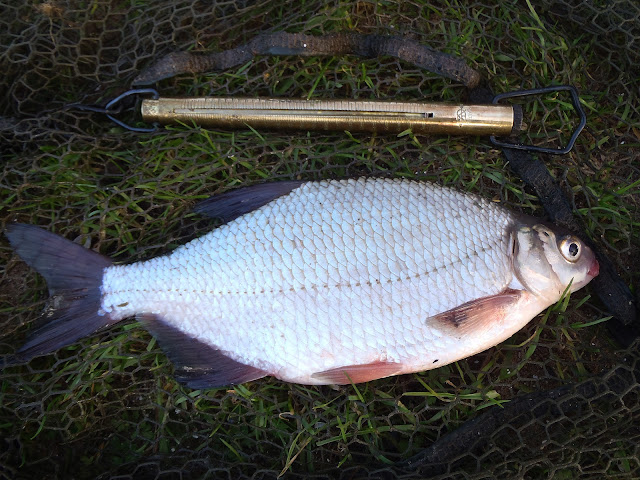 I'd had one last summer from exactly the same spot amongst a rash of bites that for an hour but no longer produced that 10oz specimen and also two silver bream/bronze bream hybrids, one of which approached three pounds in weight. Here was another as straight as a die and without a scale out of place. On my new set of Salter Model 15's which weigh in half-ounce increments up to just two-pounds maximum, it went over twelve and a half ounces so thirteen when rounded up... a river personal best.

Such beautiful fish they are, and rare too. So, I'd wrest something from disaster and found a reason to be cheerful on an afternoon that started full of sunny carefree optimism but had quickly turned chill and cheer free.