Grassy Bend this time around and for me, a second crack at mastering Norman's loaned pole. It felt warm as I stepped out the house when he advised me that contrary to earlier reports about mild weather persisting, now it was set to rain. I fetched my brolly just in case and it was a good move because within minutes of setting up the predicted began to fall.

A sparrowhawk hen flies straight across the canal expertly shooting through a seemingly impenetrable barrier of hawthorn twigs and disappears from sight. A few minutes later she returns to the woodland behind us clutching a dead cock blackbird in her talons. I take this as a very good omen because it was at this very spot in February 2009 I caught my best ever canal roach and that was the day I saw her last — in the snow, with a blackbird. 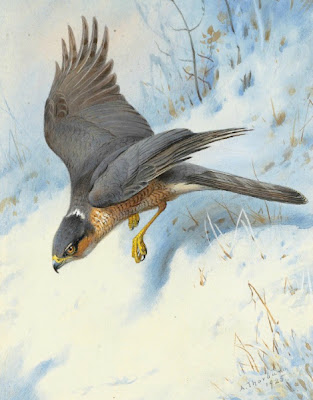 As an experiment I was using my standard trigger-shot rig with a float the same capacity as I'd use rod fishing. The pole lost badly to the rod when it came to adjustment speed needing an entire ship in, top kit removal, adjustment and ship out just to have the rig set properly for the line chosen, an operation that might have to be repeated three or four times and accomplished in a fraction of the time with a rod, but it won hands down when it came to sheer ease of control once perfectly set.

I found I could have the float exactly where I wanted it, move it without trouble, inch it up the shelf or down and get exactly the right amount of tip showing removing most of the problems encountered with a rod in one fell swoop. When half an hour into fishing I saw three inches of float tip suddenly protruding from the water screaming 'strike!' it was effortless and direct without having to take up line and straighten angles.


Then the rod nudged back into the lead once more when I realised that the skimmer I'd hooked was taking rather too long to bank, in fact it was proving really hard to gain control of. Without a reel to take and give line with at my discretion and judgement, elastic did what it could in compensation, however, I found it an automatic operation out of my control so a skimmer that would have been safely banked by rod in twenty seconds or less took almost two minutes to net. If instead of a one pound juvenile bream it had been a large roach or, God Forbid, a two-pounder and a new PB — then I'd have warmed my cold wet trousers.


A pair of large black birds settle on the towering pylons across the canal. At distance and perched upon such massive structures they look like crows, but when they fly from one pylon to another are certainly not with their diamond-shaped tails. A bird I've only ever seen on the lawn at the Tower of London, they don't look so large as I remember. They call to one another — and though I've never heard their voice in all my life, there's no mistaking it — they're ravens.


Norman has been steadily catching roach to six ounces or so by fishing tight to the far bank but eventually hooks something substantial enough to pull his elastic to an alarming degree (well it looked alarming to me...!)  We're both afraid it might and praying it will be roach... so I start taking pictures of the tussle wanting a shot as it slides into the net... 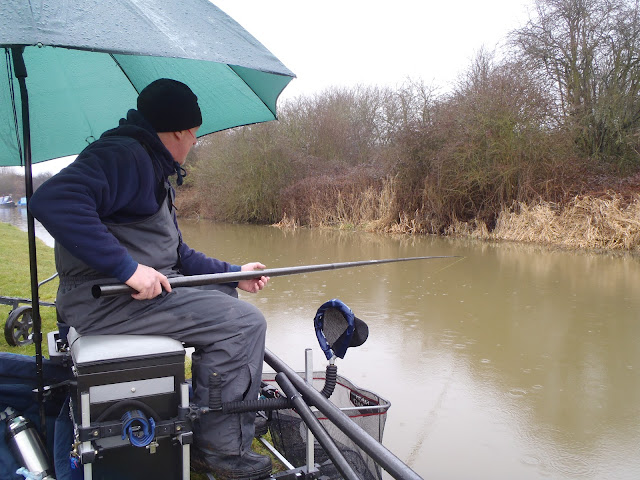 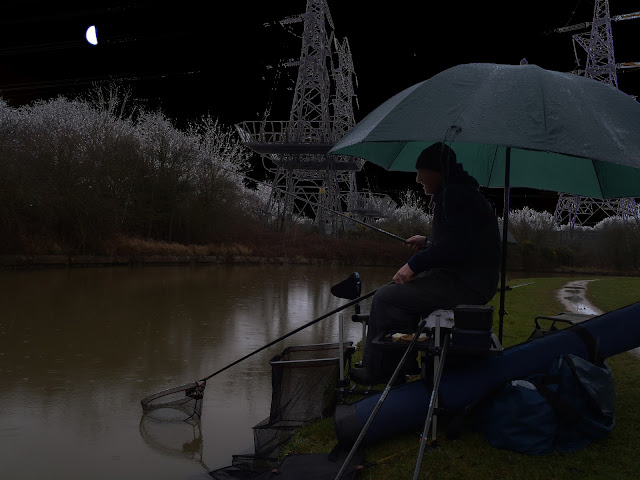 Next morning after a good night's sleep I return refreshed and warm but Norm's still there, net in left hand, top kit in the other elastic stretched out with the fish still plodding around! 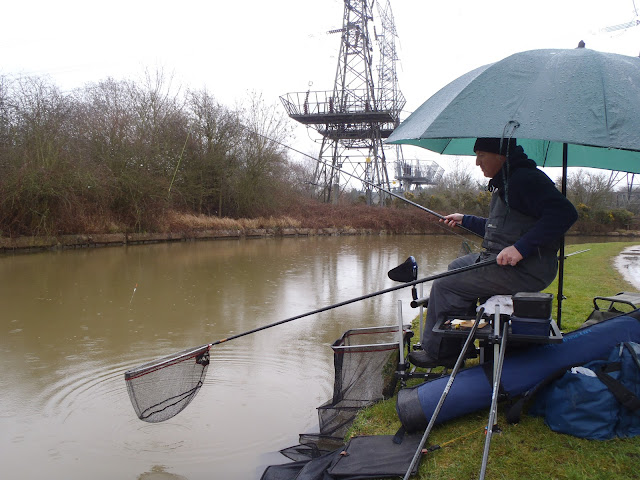 I jest. But here's that problem again only this time it's not a relatively large size 14 it's hooked by but a miniscule 22! He can't bully the fish like I had (and by comparison I did!) but has to gently tease it up in the water inch-by-inch. When at last it reaches surface the tension evaporates when a decent sized bream is seen, but a few minutes later the tension in the elastic relaxes too as the fish escapes the hook. In a match no doubt it would have been a time-waster, but today a two-pounder was no great loss unless roach in which case it would have been a heartbreaker.

With the pole I can appreciate the edge it gives, but can't see how the lack of control over the fight can be compensated for. With a rod Norman probably would have banked the fish safely in less than a minute. The big roach I caught at this very place was netted as swiftly but I dread to think back to my heart-stopping first glimpse of those huge red-finned silver flanks, and then imagine myself controlling that fish not by flexible dependable rod, reel and line but with stiff stick and stretchy elastic.

Each with clear advantages and each with obvious drawbacks...