For my third education in pole fishing method, style and etiquette, the venue was once again Grassy Bend on the Oxford Canal. Norman seemed inspired by our last outing there and couldn't wait to get back, however I'm more circumspect when it comes to 'that place' believing there aren't any fish there at all for most of the time and the ones we caught that day, and all those I've ever caught previously, were mere tourists on a day excursion eager to see the remarkable array of pylons it boasts.

I think I was right about that because we didn't get a single bite between us in four hours, and though all my approaches to roaches are all or nothing sorts of things not expecting much in the way of reward unless a fat one, Norman's micro-tactics should have tripped up at least a perchlet or two, a few skimmers and blades. It was desperate fishing, but our ravens were still around so things weren't boring.

Unfortunately, so were boats... and they're swim crashing bores.

Imagine houses with wheels — the road system congested with people driving their abodes about the country for the sheer hell of it. That's canals.

One after the other they came. One after the other. I don't know what it is that makes the vast majority of boaters move except the fact they have diesel in the tank begging to be be burned. After five years of constant canal angling, excepting the rare commercial boats who have a livelihood in movement and those who live on them like gypsy travelers and who must move home once in a while just to stay ahead in the game of avoiding officialdom and rent, I've never seen any other boat (99.9%) moving with any other purpose than travel for its own sake.

They're the worst of all, those ill-trained holiday-hire buffoons who crash into bridges, misjudge corners, smile as they pass the angler by — engine on idle in dutiful respect for his carefully nurtured swim — only to whack it into full throttle the very instant eyes part churning it to hell for the next hour truly believing they've done good!

Perhaps they don't know which end the propellor is and believe narrowboats to be front-wheel drive? That would explain the majority of their close shaves and hapless accidents... 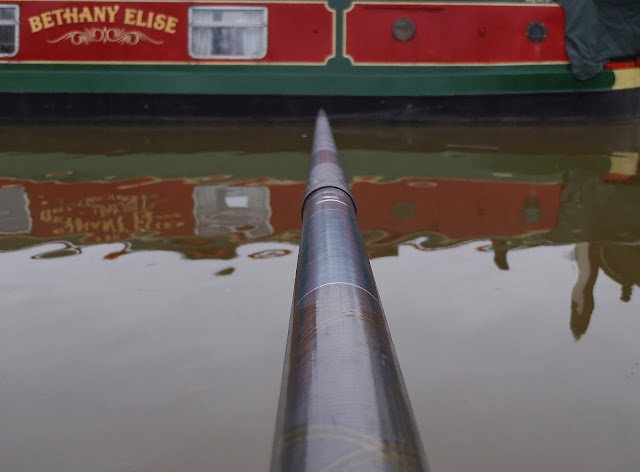 We moved eventually when it was abundantly clear there was no sense endeavouring to persevere. This involved a walk of a mile back to Longford Junction just around the corner from home. I thought we'd get bites there, catch a fish or two, and if we were lucky not get any boat traffic at all.

We didn't but still enjoyed an hour or two of likewise biteless frustration. Then, my float began to show signs of life — a little rise of the tip that could have been mistaken for nothing much with any other but with this rig was the certain sign of fishy interest — only these tiny lifts persisted but refused to turn into real bites, so I used the novel capacity of the pole to drop the bait up and down in the water searching for a sweet spot where they would.

Then it happened. The float cocked against the bulk, three or four seconds later the trigger shot and buoyant  bait hit bottom pulling it down to half inch of tip when it shot straight up again! I missed it. Then it happened again. I missed it twice. Fish were intercepting the bait on the way down.

Then Norman began getting bites too. I fed another line to the right hand side over shallower water and when I thought it about time, dropped a bait on it. The float settled, then immediately shot up hooking my first fish of the grueling day.

This time though the heavier elastic Norman had rigged my top kit with brought that fish to bank in good time, however, my inexpert handling of the pole nearly cost me when I fluffed the tricky operation of guiding the fish with the pole whilst concentrating getting it backwards to the the roller and unshipping sections of it. I need to catch many more big fish with it before that becomes an automatic thing.

It was only a skimmer of about a pound though, so it wouldn't have mattered much if I had.

Then Norman caught one too. At last the fish had begun to feed. For a brief half hour we got more tentative bites and I even caught a second skimmer but then all activity stopped dead. It was over as soon as it began.

The truth about fishing bread...
If you anchor bread an inch from the lowest shot on the line, it floats an inch above the deck and if you lengthen the distance to three inches and set that shot to dead depth, the bait doesn't 'lay on' three inches away as popular advice would have it, but is anchored three inches off bottom.

If you've ever fished bread baits on standard waggler rigs and plumbed the depth at the hook then the last shot that you set, say three inches off bottom, means the bait will be six inches off bottom and if the last shot on the line wasn't heavy enough to anchor the size of bait, then you might well have been fishing a foot or more up from the bed all the while believing it was fluttering tantalisingly past the fish on its way down.

I once saw my bread bait fishing an eddy current in a crystal clear river, anchored to a feeder, but floating three feet off bottom in five feet of water. I witnessed a chub sneak out of nowhere and take it though!

Without that rare glimpse of the truth of the matter I would have believed I'd caught it within inches of the riverbed rather than six inches above midwater. As a consequence of that insight, nowadays my river roach rig has a shot pinched three or four inches from the hook and calculated to sink the bait whatever the flow. I catch less chub, but far more roach, which is as I like it.

Contrary to popular belief, the only thing that keeps bread down where you want it is shot heavy enough for the job because bread floats and still floats even if you compress it between your fingers and fold it half as I do. The evidence of that is disks of bread popping up upon the surface half a minute after every time I lose a bait in the canal.

No, the only way to fish bread actually on the bottom is to crush it with a rolling pin to get all the air out, or put shot right against the hook.