Another shot at the urban Coventry Canal on the cards should weather conditions allow, instead of borrowing a pole this time around I decided to fish my trusted methods to see if they worked as well in clear water as they do in the coloured water I'm used to.

I went up the shop to buy bread early morning when I saw the canal capped with an inch thick layer and believed we'd not get to fish at all without an ice breaker, but on arrival Norman's worst fears were confirmed... we had cat instead of thick ice to contend with because of the slight difference in temperature between inner and outer city. He'd already mentioned that thick ice would be a good thing but should cat ice form instead it might kill sport stone dead.

The thin ice was relatively easy to clear with a bit of effort with a heavy bomb and landing net pole by breaking it into sheets and then pushing one under another. Within twenty minutes we'd cleared enough space to fish and set to work. 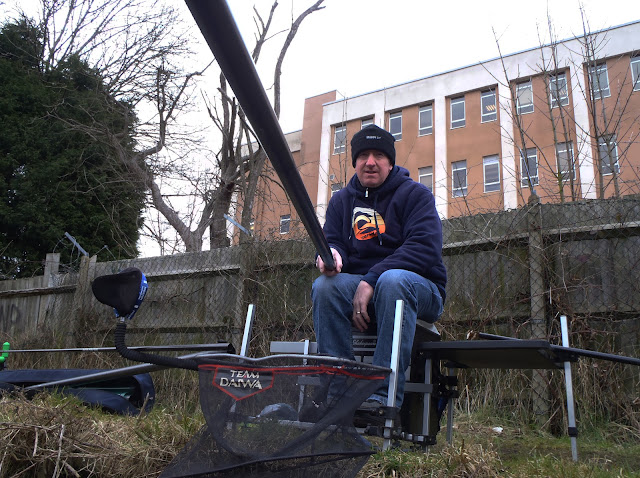 The pegs chosen were as near as we could get to those where in the harsh winter of 2010 Mick 'Scratchcard' Hatchard broke a slot in thick ice to win a Coventry Canal Winter League fixture with a stupendous 38lb of bream and roach. That day Norman drew a peg just a hundred yards away from Mick but struggled for five pounds. That's the Coventry Canal for you! 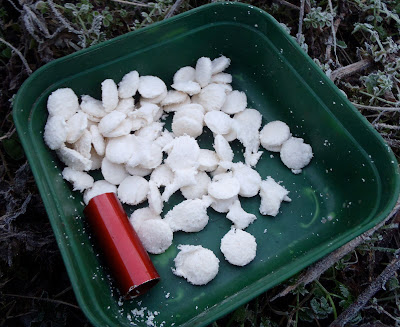 Norman fished the tiniest microdot of bread punch he could muster today while I took the opposite extreme by fishing the largest bread disk I'll cut — the 21mm. The difference was enormous. Passers by must think me an outright noddy witnessing what I fish with. It looks pants, that great swollen ball of mush dangling on the end of what looks to be a really coarse and heavy rig.

However... appearances can be deceptive! It might look crude and clumsy but it's very selective of big fish and the most elegant and refined method imaginable...

But, no matter how good a method is used there must be fish for it to catch and it appeared there weren't any about so my float sat sulking whilst Norman received few very tentative bites and brought in a slow trickle of tiny blade roach and skimmers. As predicted, it was tough. After two hours or so I decided a move was necessary because the way I fish canals, if bites don't arrive within the right time frame in any given swim it's never likely to work there the whole day long.

A boat passed through and that was the push needed. I had been in the peg to Norman's left so I crossed over and chose one fifty yards to his right, pitched in a handful of finely mashed bread and fished over it expecting bites straight away. Sure enough, five minutes in the float shot up in the water unexpectedly (that's usual!) and stayed there long enough for the shock to clear (that's usual too!) and a very late strike.

I knew it wasn't a roach — I'd have missed if it were because roach bites don't stay up but fall back when the fish spits the bait. This was a bream, a good one too and as usual with canal fish gave a spectacularly hard fight before it was netted. Five minutes later when Norm had packed down for a move and arrived at my peg, the float shot up again. I was prepared this time and struck firmly when it's necessary, which is before it reaches the top of its travel. No roach though, but another bream a little smaller than the first.

A move was made when the expected third bream failed to show. Once again it was dead so at the last I moved once again and repeated the familiar process — a handful of mashed bread into the boat track and the big bait fished over it. After five minutes the float lifted but fell straight back down again before I'd time to react — a roach bite for sure.

Norman packed down and came along to watch. I really wanted another bite to occur just so he could witness it, and it did. A little dip signaled a liner as a fish brushed the rig, a short wait until the inevitable, and then a sudden and dramatic lift that because of alertness was struck on the rise...

Nothing! And nothing next cast either. On a tough day when roach weren't playing, the one chance I'd had passed by in the blink of an eye.

Now, just in case you were wondering ~

Who ever heard of such a preposterous thing? Shouldn't that be instead... 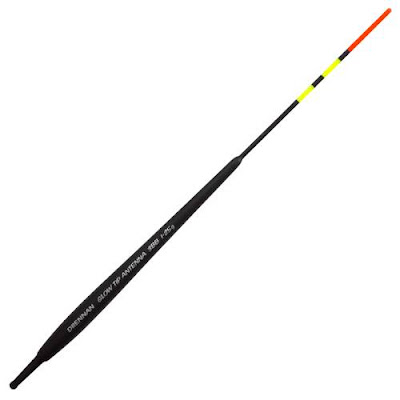 This 'trigger shotting' I speak of is an old tench fishing method I've gradually adapted to canal roach fishing requirements by scaling down and making refinements for the sole purpose of instantly registering the shy and tricky bites that large roach give when taking large pieces of bread — those bites that do happen but won't be registered by any other method nearly quickly enough, if indeed they're seen at all.


It works by exploiting the capacity of certain 'body down' floats to shoot up in the water when the weight of a single 'trigger shot' is subtracted from their total shotting requirement.

Any float can be made to work but it takes a special float to work properly. Those I use are the Drennan 'Glow Tip Antennae' pattern choosing those two sizes that cock with almost the entire antennae out of the water under-laden with either three or four BB shot, but are slowly sunken when overladen with one more added to the total. With this particular float one extra shot is the difference between seeing all three inches of the antennae or none of it —thats what makes the rig so effective when correctly set up and the bites so surprising. 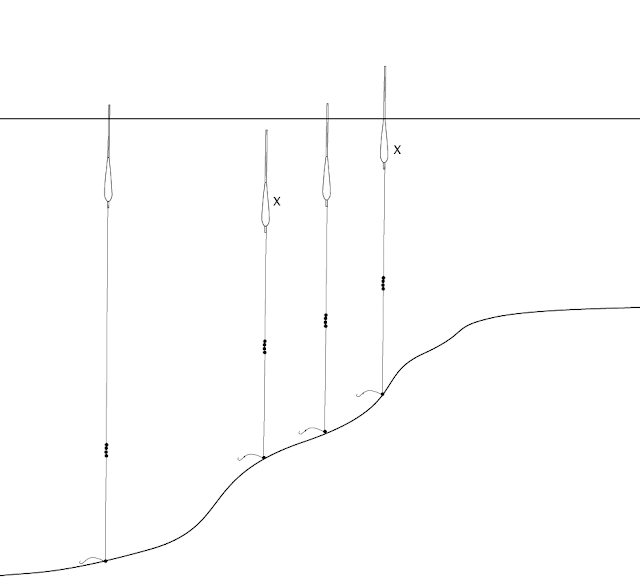 The bulk BB are pinched on 12-18 inches from the hook depending on depth, but the trigger shot just an inch from the knot. The float is held on the line not by shot but by a single rubber so that depth variations can be quickly and accurately adjusted to. The object is to have the trigger shot anchor the buoyant bread at dead depth and bring the antennae down in the water till just the red tip shows above. Over-depth there's too much showing, under-depth there's too little or none at all. It is absolutely depth-critical, takes a lot of work to get perfectly balanced and is no method for the lazy... 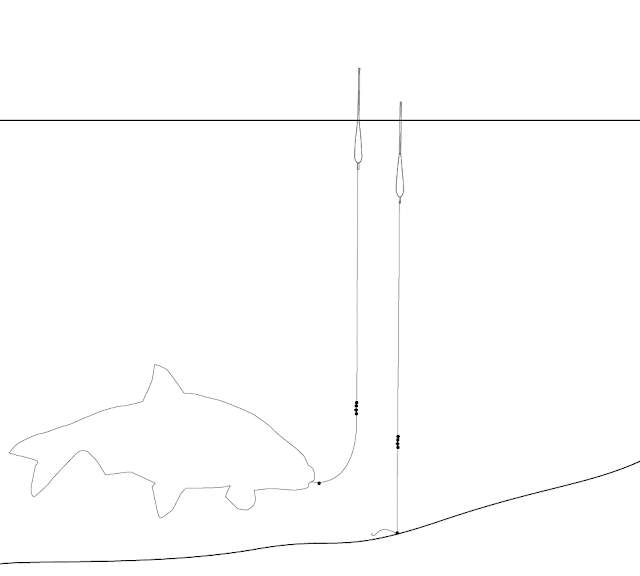 Then, as a fish picks up the bait the weight of the trigger shot is subtracted when the antennae lifts registering the bite in the most dramatic fashion. It can be so shocking because in calm water  reflections make even a half-hearted lift showing just the first band of green appear twice as long as it really is, and with a full-blown lift into the black, there's so much antennae out of the water that you'll not believe your eyes and fail to strike in befuddlement. That won't matter much with bream and tench because it'll stay up and even slide under eventually, but will matter very much with roach who'll pick up a bait then spit it out just as soon, so with them the strike is made well before the antennae reaches its maximum lift and sooner if possible — if you can anticipate it! 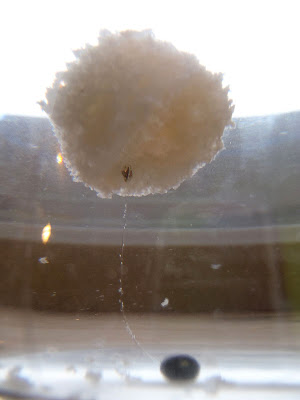 There are no 'sail-aways' with the shot so close to the hook —you'll wait all day and never will one happen where roach are concerned. Just as with river ledgering where the strike must be well-timed against their famously tricky trembles, here the case is just the same, the rig exploiting the fact that big roach take big bread baits a certain way and purpose designed to allow bites to be read within a fraction of a second of them happening.

That's why it's the most refined and elegant canal fishing float arrangement I know of. For all its apparent crudity it's a heavy weapon with a finely tuned hair trigger that will fire should a fish so much as breath on it. The only trouble is, the bullets fired come straight at you, not the fish, who are simply the agents pulling the trigger.

Just as roach bite, you have to be every bit as as quick yourself and catch 'em in your teeth but on this occasion I'm afraid I fluffed it and got one in the eye!