This is the rig I have been developing for my own zander fishing on the Coventry Canal over the past year or so.
It began life as a way of coping with the peculiar conditions of canal fishing both by day and by night and in its first incarnation employed a wine bottle cork with a sea hook impaled in one end so that the eye of the hook projected over the other end of the cork - still a useful way of improvising a float for day fishing for predators or sea fishing if you have lost your last or left them at home but one that proved slightly difficult to use at night as the chemical light was difficult to attach. 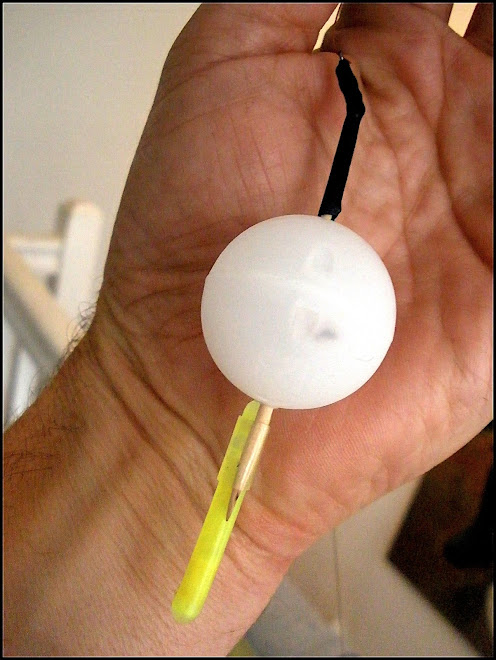 I eventually had the brainwave to use the widget out of a can of Guinness as the float, improvising a way of attaching it to the line by piercing the two small valve holes that are slightly off-centre either side of the widget with the point of a dart and passing a cocktail stick through the body. One end of the cocktail stick was inserted into a homemade waggler adapter made from a small swivel and a length of silicon tubing. This is quite a fiddly operation but I found the easiest way to achieve it was to pass a length of line through the eye of the swivel and pass the paired tag ends through the tubing drawing the swivel inside forcibly.

The other end of the cocktail stick accepts chemical lights of two types - the rod top ones with the central groove (medium) which is carefully eased onto the stick and the normal one with the small length of tubing supplied in the pack for attachment to the tops of floats.

I take along spare cocktail sticks for repairs just in case I break one, which I often do... 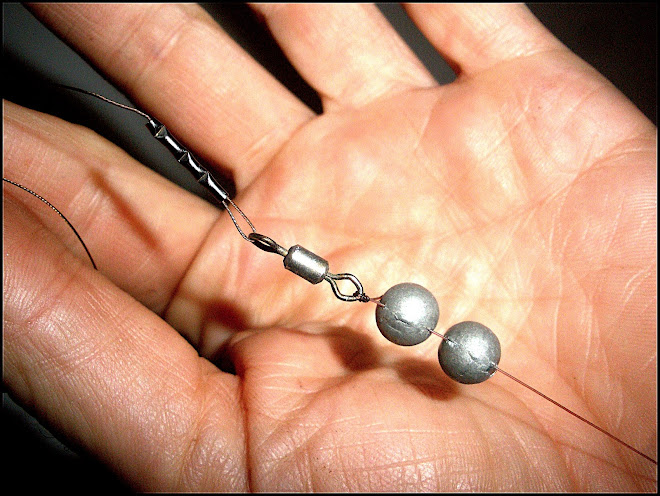 This float is set up as a slider with a moveable stop in the form of a small split shot pinched at the right depth and the float anchored by a pair of swan shot (or a drilled bullet) pinched on the line just above the swivel of the wire trace. The reason I have the float sliding is that casting the rig very close against the far bank features where the zander invariably are in daylight it seems, is made far easier by the short distance from float to hook. It is very compact, does not swing around wildly on the cast and as a consequence causes fewer accidental run-ins with trees, boat awnings and the like. Deadbaits do not make attractive pendant baubles, believe me!

The depth is set so that the bait is laid on the bottom with the shot on the deck too in really windy conditions but at other calmer times with the shot hanging so that the bait and traces is only touching bottom enough to prevent tow pulling things out of position - this is when bite registration is at its most sensitive of all. To allow the bait to wander and search around for bites,the rig is set under depth with the bait above the deck, of course.

The top heavy float cocks and rides at anchor with the chemical light visible, but because of the off-centre holes in the widget the float rides with the chemical light acting as a weather vane pointing backards from the wind direction. This has the desirable effect of indicating not only stability, the bait and rig all set up just so, but because the float is inherently unstable without the counterbalance of the swan shot it also gives an immediate warning of the introduction of any instability such as a fish picking up the bait and moving away with it. The float can make all kinds of odd lurches and movements on pick of the bait, even keeling right over flat. At night with a bright light atop the float the effect is startling, incredibly visual and most exciting - when a fish moves off at speed, as they often do if there are competitors around, then the chemical light can be seen traveling underwater.

If you have seen Jaws and remember the way that the barrels behaved when the shark made off, then you'll have some idea of the effect! 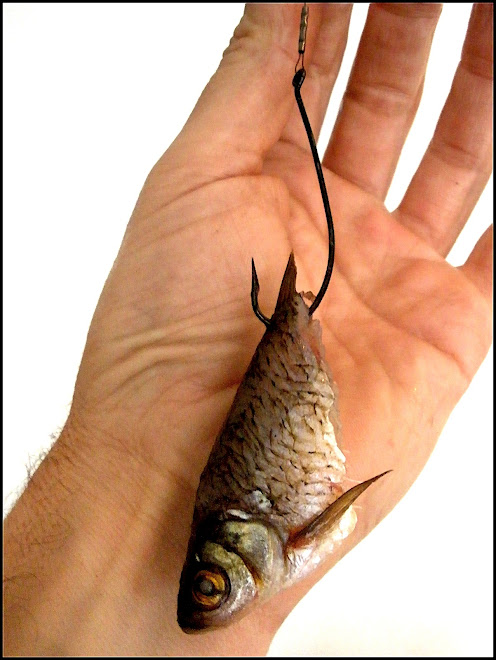 The hook is most problematic part of the rig but I am working on it. I have tried and abandoned treble hooks, snap tackles, pennel rigs and the like, and settled upon the single hook as best for purpose. Recent experiments suggest that the precise pattern that gives most hook ups and hook holds might be along the lines of a very large 2/0-3/0 Mustad Ultimate Bass hook, barb crushed flat as it's a beast of a thing to remove for catch and release with a barb, with a halved (or even quartered) small fish (here, a two ounce rudd) cut diagonally across from the pectoral fins to the dorsal fin giving two secure mounting points for the two halves, a. the root of the dorsal fin, and b. the root of the tail. In both cases the bait is mounted to hang from the bend of the hook with as much of the hook exposed as possible.

However, one good session with the Mustads does not an answer make. If they prove successful over the next few sessions then that will be that. I'm aiming at achieving a 90% hook and hold rate because with the right hook pattern such a thing is not just possible, but certain. Soldiering on with the wrong pattern? Well, then 30% is respectable work, but it's bad, bad fishing.
Created by Jeff Hatt at Friday, October 08, 2010