I've been so busy writing this book of mine that the blogger in me has taken the passenger seat and has been idly watching the landscape fly by as this upstart book writer hangs on to the wheel with his foot to the floor but luckily, even speeding upstarts need a stop off at the service station every now and then so the blogger has been able to stretch his legs once in a while. The word count is now scraping 50,000 and will pass that mark today with the beginnings of the another chapter and as they are pouring out so easily I can't see the first draft taking more than another couple of weeks to complete and now I'm beginning to work on the illustrations as a way of slowing things up a little and getting the mind to come around to the idea of editing - the slow and methodical but enjoyable process of sifting flour and cutting fat from the beef for the succulent meaty pie I'm baking. 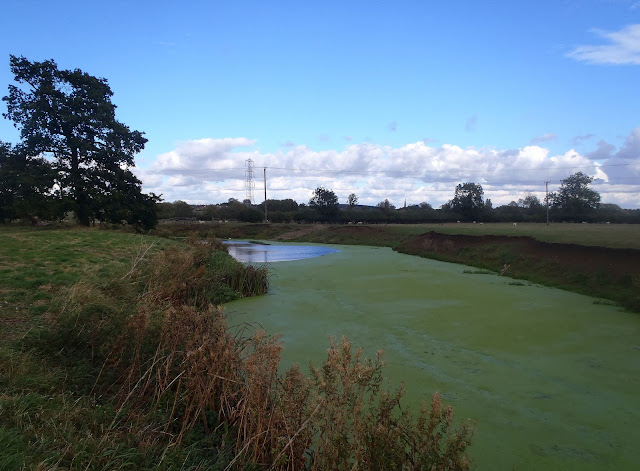 It's a good thing I have friends. If not I would have stayed inside and typed all day long. As it happened, Steve took me along to Celtic Lakes where both he and Lee went zandering but where I went roaching in the river Wreake and both Danny and Martin have taken me along with them to Stratford, Danny twice.

My river fishing wreaked. It was fun, but limited by the fact that despite the lush looking aerials of the stretch available, on site it was all but un-fishable with really just a few swims to choose from because of the flood control weir in the centre which has the water backed up for half a mile and smothered in floating green weed and below the weir was too shallow and choked with reeds, however the short pool directly below the weir was clear and could be cast into so after trying out some of the deep water swims above the weir in the few open spots I could find, one of which was probably the chubbiest rubbish-raft swim I have ever seen but was empty of them, I stayed put there for the duration and finally had my fun with the chub that occupied the tail of it and the few roach that I was sure were living in the head of it, but that I couldn't catch.

After dark a barn owl flew silently over the back of my head and perched atop a scaffolding pole sunk into the ground and minus its sign on the far bank. Like a gunslinger too late on the draw I failed to get the camera out of the hip holster in time, the bird turned its head 180 degrees as it sensed my movement, flew off and shot my efforts to capture it dead in the dust. 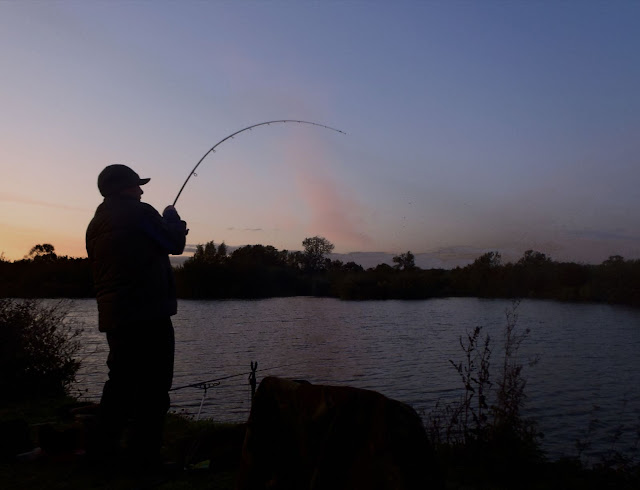 Lee had a double figure zander that evening and zander was what both Danny and Martin were after down at Lucy's Mill. I of course was after roach in the weirpools. Roach sport was slow on all occasions and never produced much but the place is like a home from home nowadays and so I just enjoyed myself jawing the time away without worrying about catching. 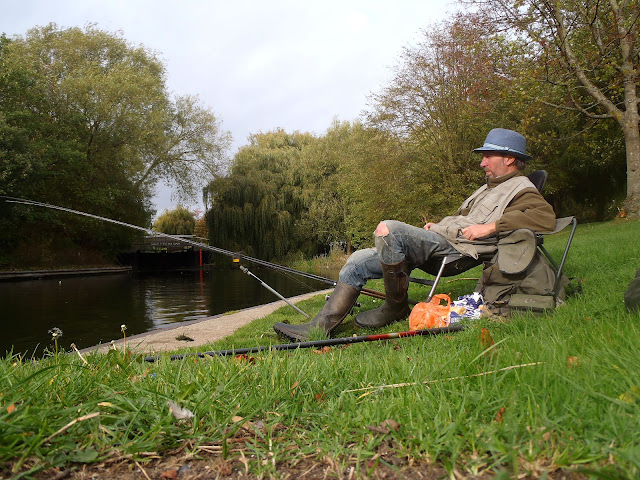 The bites over the early morning sessions with Danny became harder and harder to find and harder and harder to hit successfully with the catches dwindling away to hardly anything. I did have my first ever Lucy's Mill chub though and Danny a zander and they came before first light. It seemed that the morning sessions would become progressively more difficult as the light came up with most of the good bites and fish falling in the dark, and that's unusual for river roach. But perhaps it's something to do with the fact that the river is running through at the lowest level I have ever seen having had almost no fresh water enter the catchment in what seems like a year.

The evening session with Martin was better and we both caught what we intended to. My first bites, though few in number did all connect but then it became utterly impossible to hook up with any. It had been a good session and building as the dusk approached to what I hoped would be a crescendo but one that suddenly, and for no fathomable reason, stopped mid-beat, the fish despite their increasingly confident bites, getting away with it. 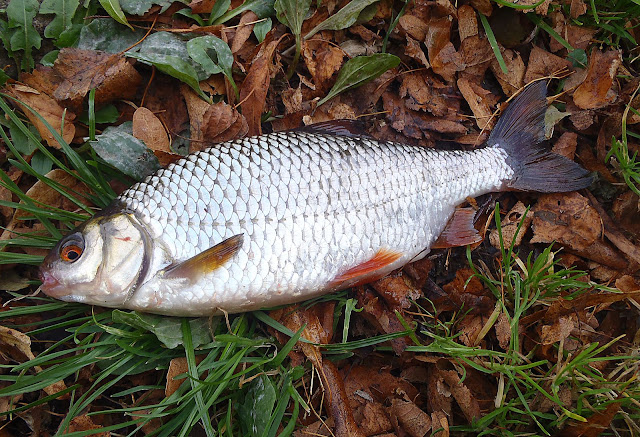 Later, after a wayward after-dark boat without a headlamp and a drunk at the wheel appeared out of nowhere, crashed along the steel revetment along the near bank on its way to the lock and trashed my line, I pulled in and examined what remained of my end tackle. It was then, whilst trying to untangle the hooklength from the feeder I noticed that the hook was blunt and so dull that it would not enter the skin of my finger tip even with full load on the line which snapped before I felt anything. I'd been fishing for well over an hour with it...

I don't remember pulling out of any snags but I must have had the hook hit something or other down there... Hey Ho!

The third session saw me and Danny arrive wierside at five am. I had a plan to fish through till first light and then go up into town and have a go for a certain fish that has been living around the footbridge all summer long and one that has been seen not just by me but by two independent sources who have relayed the same tale of a 'carp' swimming about there to both myself and Keith on separate occasions. When I first saw it I thought too that it was indeed a carp, but a closer look over the parapet revealed not a carp at all but the white lips of a simply massive chub of probably seven pounds in weight. 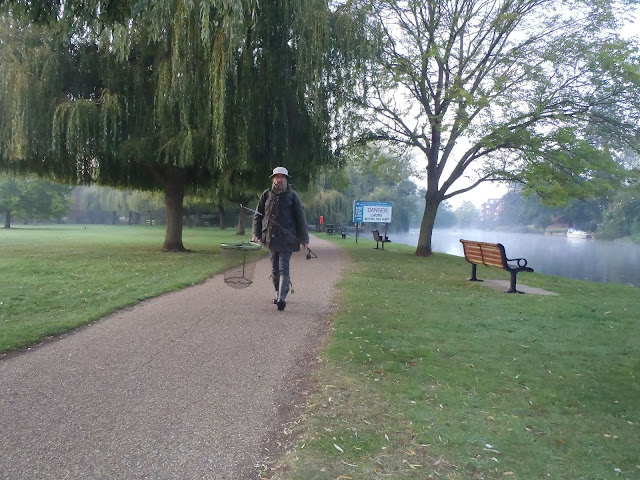 I made my way up through the recreation ground with ideas about how best to target this fish should it still be there. This is not a place that could ever be fished in daylight, evening or early hours of the night as the place then is simply crawling with tourists and duck feeders, the reason the big chub was there in the first place no doubt, as it would be a regular daily feast. Now at first light here were just a few early birds going to work and so it was possible to throw a bait off the concrete bank to the side of the stone bridge and get it by the pier where the chub had always been seen without having much trouble. 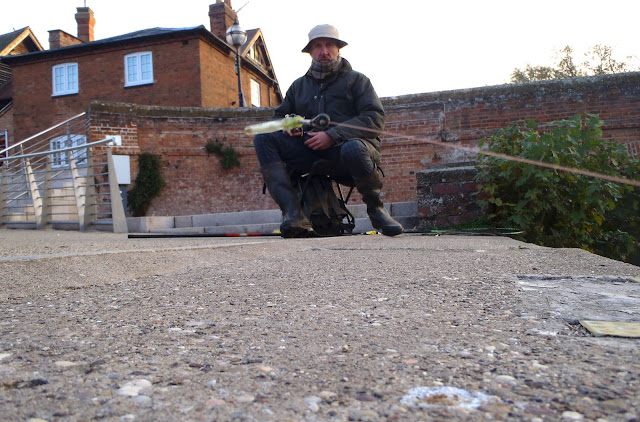 Unfortunately the chub was not around however a far smaller version of itself was and a gang of three four-pounders were ambling around the island too. I had to have a cast for the solitary one and the first did receive a bite but I fluffed it. The swans were a pain - they always are - but I got a few bites in deeper water which just had to have been from roach, but sooner than I'd imagined they would the crowds were pulled out of their hotels beds by the light and were already congregating around the waterside feeding them and the game was over before it had really began.

Back at the mill the sport had slowed down to a snails pace and never got any better and I ended the morning with a single roach and the smallest bream I have caught from the place and this was far the worst result I have ever had.

Rain, rain, for God's sake give us rain!