Gonks on the March

When I came up to the Midlands four years ago I started river fishing properly for the first time. I'd been living in Essex my whole life before but river fishing is not really something anglers do down there as the only 'decent' river available is the Lee (or Lea), which is certainly the most polluted and shamelessly abstracted chalk stream on the planet, and the upper reaches, where the monster chub are is too far Up North and besides, that's in the foreign country of Hertfordshire.

My first ever proper river trip was to the Avon below the Saxon Mill and there I decided to fish 15mm pellets for a chub, a species incidentally that was the only fish I ever caught from an Essex river. I was carp fishing with luncheon meat in the Ongar AA lake and went on a leg stretching walk along the nearby River Roding and half-heartedly chucked a cube of meat in on the end of my line, which was snaffled by a three pounder just as soon as it hit the water, so, remembering that day I just wanted to catch a second chub as my first fish from this Midlands river and I did, but only a half pounder.

But then I caught a gudgeon. I'd caught plenty of these before from Raphael's Park in Romford but never any quite as big as this one. I admired its beauty and strangeness for a while and plopped it back. Only on the way home did the nagging thought arise that I might well have thrown back a British Record...

I checked what the record was and it was only five ounces!

I forgot all about that fish, and never had another one from the stretch once the resident carp got it into their heads to have any pellet I threw in for chub which really miffed me - I go fishing for chub in a river and what do I catch ? Carp. The very species I had always pursued in Essex and the last I wanted to catch here...

The memory of my 'record' gonk only resurfaced when Danny caught a monster gudgeon of his own on our recent River Itchen trip, one that was over seven inches long and that pulled his scales around to six ounces! The only trouble was that his scales were never designed to weigh accurately at that level so couldn't be trusted. Mine were, but I was nowhere nearabouts, so he plopped it back.

Now there's been another huge record shaker of a gudgeon out of the Wandle. Take a look at this post by Brian of Pike Blog and wonder at the girth and length of his leviathan! But once again, the scales let the captor down.

Are any of these fish really record worthy?

I doubt it now that I've looked into it. They are all very big indeed,  probably four ouncers or more and that's equivalent to a sixteen pound barbel or a big three pound plus roach, and to put these genuinely huge fish into some kind of comparative perspective take a look at the specimen list of the Grand Union Gobio Gobio Society and you'll find that top of the list is a fish of just 49.5 grams, or 1.75 ounces, 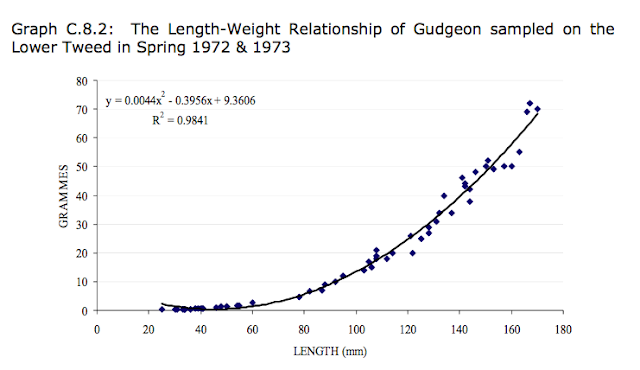 This is a record of gudgeon samples from the River Tweed by the Tweed Foundation and shows a curve of weight by length. If we extend that curve and find where the record gudgeon would lie, then we get a reading of 8 inches for 5 ounces. 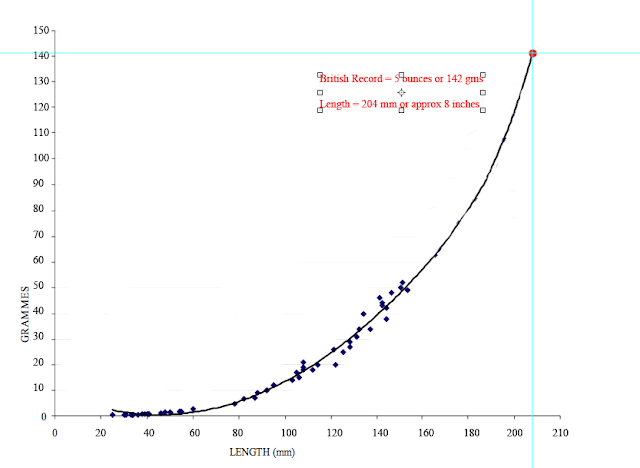 That's a much bigger fish than a seven incher even though you may not think an inch would make much of a difference. Here's what difference it really does make - as you can see the top fish at 8 inches is simply massive compared to the 7, 6 and 5 inch fish below it ~ 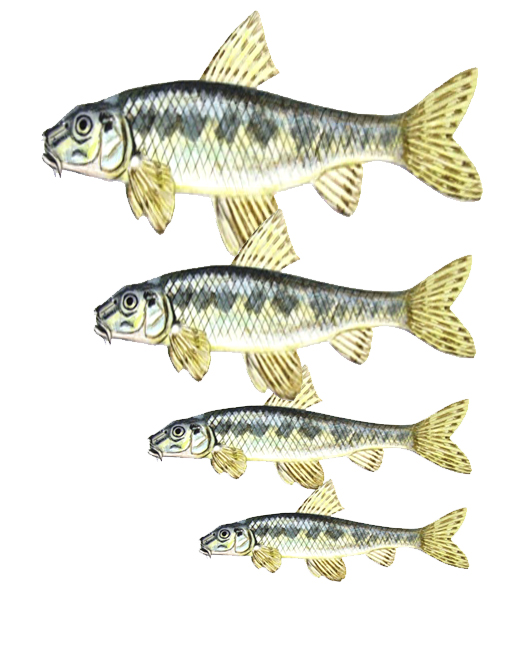 There's only one answer. Everyone who fishes seriously for these fish, and as they seem to be getting very big indeed at this time in our rivers we should all be trying, must get a set of the right scales. Dial scales are out - they have gears and don't work reliably below two pounds and below a pound are more likely to weigh five ounces at seven or three or anything other than five. And, if a record was caught the BRFC would just throw the claim out as they'd never be able to decide if the scales were accurate on the day or the claimed weight just an accident of stiction.

Digital Scales? What's between the mechanical hook and the digital read out? Gears and transponders and microchips and batteries and LCDs and what not....who knows! I can't trust anything with much complexity and so many failure points in-built and place my faith entirely in something that really can't go wrong unless a bit of rogue mud gets stuck up it that can be washed out in the water at my feet, a simple and basic tube of brass and a spring of steel with hooks hung off either end.

The Salter Brecknell Model 15 in four pounds max is my answer. It has MADE IN BRITAIN punched into the brass, not CHINA or TAIWAN in the plastic and that's a comfort in its own right...

In brass and steel I trust.

The only trouble is that the kinds of scales that can weigh such fish accurately are all expensive. Mine were a bargain and cost £35 in damaged packaging but they retail at nearer £50. It's a huge price to pay for scales that might only get an airing once in a while but if you're into roach and dace, perch and crucians, silver bream, rudd and the like as I am then they get used far more frequently than my trusty-over-four-pounds only dial balance ever does. I can't go out without them and couldn't sleep before I bought them.

And, if I do ever catch a second stab at the British Gonk Record I will claim it and get it verified by the BRFC no problem at all just so long as my witness doesn't die laughing...

Email ThisBlogThis!Share to TwitterShare to FacebookShare to Pinterest
Labels: Gudgeon