River Roach - Scratching the Itch - Down Beat & Up Beat (pt2)

Both the news and the tea were very, very good when I got to the fishing hut  - Danny had broken the British gudgeon record but slipped it back unwitnessed, nonplussed by its size, unsure that it could ever have been what it actually was and even confusing it with a baby barbel! Luckily (for us) he had the proof in pictures which are often better evidence than the fish in the hand and had weighed it at six or seven ounces on a dial balance never designed to be accurate so low down on the scale but there's no doubt about it - it was a gudgeon alright and seven inches long too
. I wish he had brought it down to me as my spring balance is deadly accurate at the level of ounces - then we would have known for sure and Danny might well have been filling in a claim form as we speak. Then again, I'm glad he didn't as I'd have had to part with my scales for verification purposes and I do hate being without their lustrous trusty brass.

I put the Kettle on and made him a steaming cup of sweetened commiseration. He'd also had a personal best Grayling over two pounds but even that was overshadowed by the gonk experience and that was all that was on his mind. What was on my mind was having a short break from stalking roach. 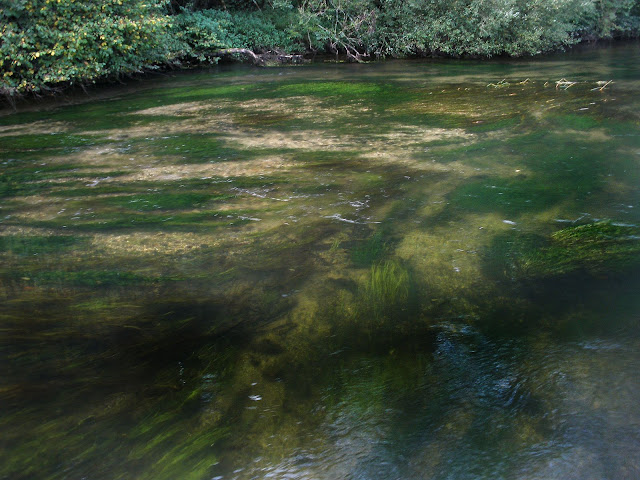 On the way back down the swift shallow game beats I stopped off in every likely looking deep hole to fish corn for a good grayling. Corn really does sort out a different class of fish here and I'd had a new personal best myself by the time I got back to roach country, but only by an ounce at one-pound-one, and that amongst a lot of other fish some of whom may well have been slightly bigger but that I didn't weigh or photograph as fragile summer grayling being the arctic creatures they are just can't stand to be out of water for long.

I started to fish the bread once again when I neared the coarse beats but only took more grayling.  Dropping into just about every place I could feasibly fish I was yet again looking for roach bites but in contrast to the morning when all bites had been hard to find, now they were more frequent and mostly from grayling, who seemed to have switched on to feed in the deeper water. 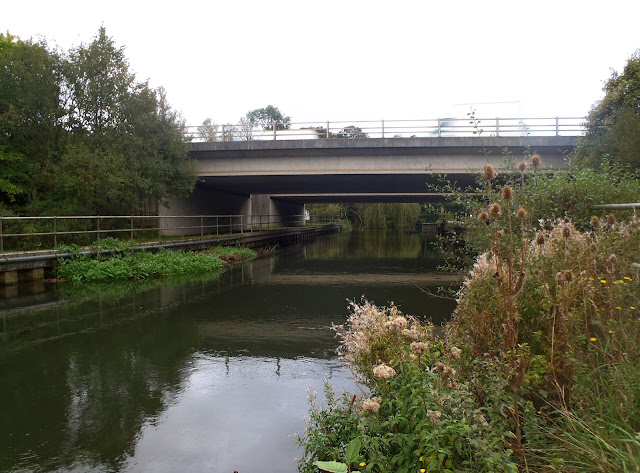 By evening I'd reached the Motorway bridge and decided to fish the swim that Danny had occupied through the early morning. The fishing here was industrial - reminding me of some of my favourite swims where the M6 bridge leaps the Coventry Canal. It felt like home.

It was a nice easy cast for once - the feeder lobbed right across to the far bank and arcing around in the flow to settle mid-stream when all day such an approach would have found me snagged in weed and losing hooks.  However the swim was not exactly weed free - it had a number of tricky thickets out front just where the net would have to go and fish would have be kept well clear of.

I began to fed the swim quite heavily with the remainder of my bread supply hoping to draw fish up from the the water beneath the bridge and kept enough fresh back for the hook. It worked and within ten minutes the rod whacked around and a tricky trout was teased across the troublesome weed hurdle. He was followed by a chub, and another chub, and yet another chub. It hadn't yet worked as I'd hoped -  the bread feed had done was bread feed always does when the chevins are about. I sometimes think a chub will travel a mile or more along a trail of breadcrumbs just for a quarter slice. 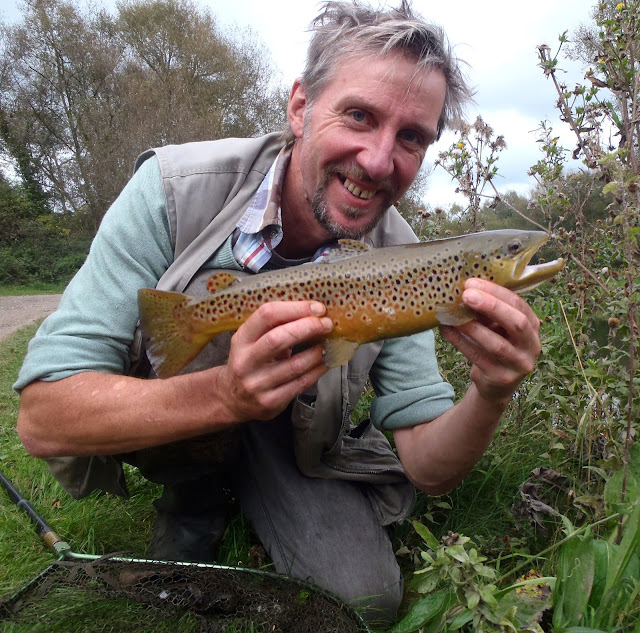 Where were all the roach? It was now prime time and not one had so much as topped all day long let alone been caught. I like catching chub, I really do, and you can't avoid the trout at any cost, but there should have been at least one who would have been tempted over what was now approaching twelve hours of solid plugging.

And then it happened...

A little tippity tap - another little tippity tap - and then, after twenty seconds with my hand hovering over the butt of the rod, the unmistakable steady inch down of the tip (which curiously looks nothing at all like the inching down of trapped weed) of a proper roach bite. The strike connected and in came a flappy little roach...!

Woohoo! I doubt I've earned a fish by such graft in my entire life. Not surprisingly it got its picture taken before it was returned well upstream. 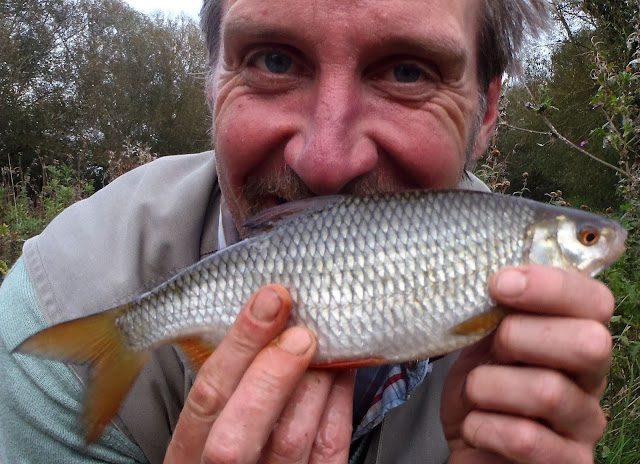 Now I was a man possessed and utterly focussed upon that slim white tip with its lashed-up greenstick fracture and its troublesome nightlight attachment. Another roach bite came - you wait till it inches but can't strike till its inched just so - and sprang back. Classic roach, and couldn't have been any other fish. A recast, the bait settles and the fraught wait begins over. Tippity tap - tippity tap - "go on, go on, goooooooonnnnnn" - inch - strike - fish on...

It's a better fish, twice the size of the first, but only half what I spent all that effort for. Just under a pound and lovely with it... 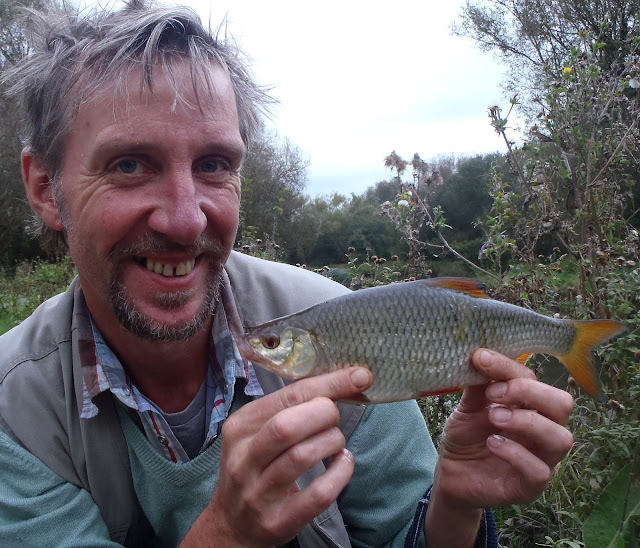 Something twice the size of the last?

A recast, the bait settles, Sash appears behind me and........Whack! Chub.

It gets under the weed and sticks fast. Sash wields the net while I hand-line what now appears to be a snagged feeder and long-departed fish, but then it moves and the fish is still on so Sash sweeps it up and onto the bank for me. The light is failing fast so I turn the camera on auto-flash and all of a sudden it's apparently pitch black night...! 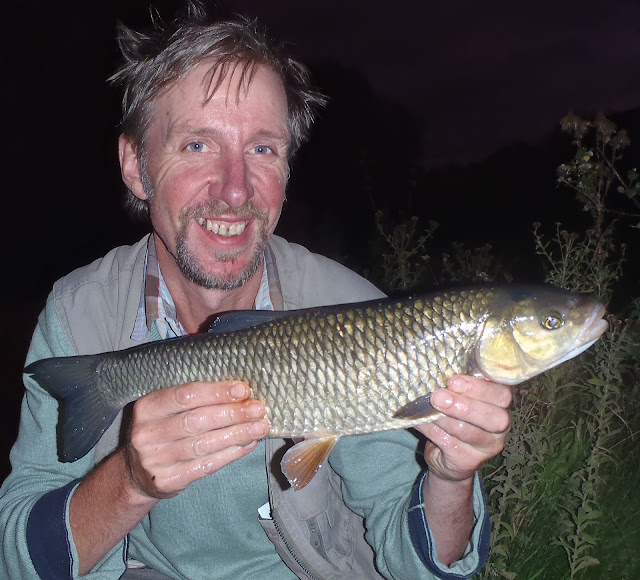 It's not quite night yet in fact it's the best time of all and I want and beg for the roach return, praying that the feed has not brought more chub on song. No more tippity taps now, no more slow inching, no more roach, but I wait on and on for that bloody tip to tell me otherwise. People are leaving, cars trundle crunching down the track and pass out the gates. Paul packs down above me and passing by we say goodbye for another year. Shaking hands through the open window the rod top flies toward Southampton and I have to lurch to save it getting there the wet way.

Chub - straight into the weed - locked solid - hand-line job - it's out and I drag it downstream, rod whipped over a bankside bush, to the clear water below the bridge where Paul, who has come out the car to watch antics has the net in his hand and leans over the rail and nets it expertly. Four-pounds-ten, the best chub of my day...