I had to go back. That single dropped run I had was enough to inspire a foray even if the lovely sunny day ahead couldn't tempt me out.

This time I took a trio of straightforward baits, pellets and meat and corn, and decided that one rod would be the corn rod and the other the trial rod and the logic being that the carp here would have seen more corn than any other type of bait other than maggots - corn being one of the standard baits that people chuck in after canal fish of all kinds and one that these carp would be well used to mopping up after dark. 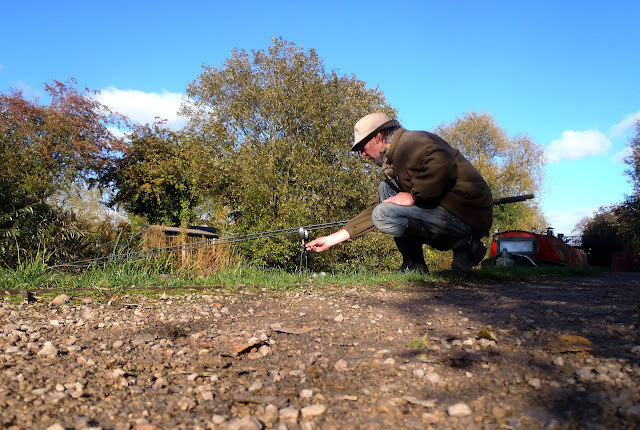 The casts were made, the bait was laid and I settled back to 'enjoy' what I thought would be the same routine experience of yesterday - a long blank wait with a dropped run somewhere in the middle reaches - but I couldn't have been more wrong headed. The bobbins twitched every so often as fish knocked the lines so at least there were fish of some sort over the bait and I had a sneaking suspicion that today something would indeed happen as the swim seemed, in stark comparison to the day before, alive. 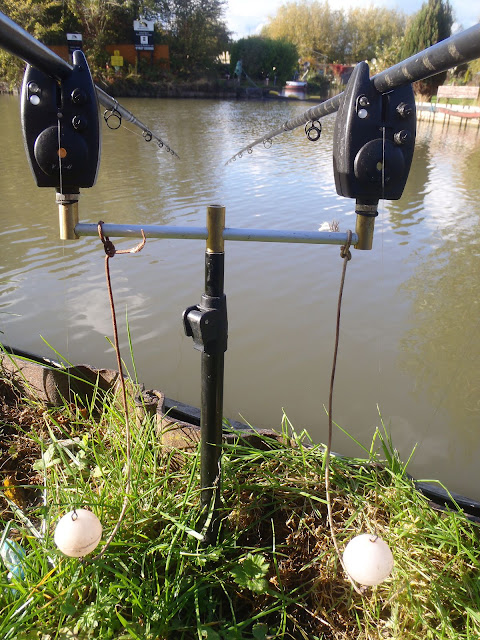 The spells of twitching lines came and went and along with them, just every now and then, a larger movement of six inches or so followed by a drop back of the bobbin indicated a line bite from large fish passing through, around and over the baited area. I fully expected a screaming run any moment even though I had no way of knowing if the fish causing the liners were carp, tench, bream, pike or zander, all of which are found in this place traveling in and out of the marina entrance where the baits lay.

However, nearly three hours in the 'screaming run' had not materialised and with just an an hour to go before my self-imposed home-time of four 'o'clock it looked more and more unlikely even though (working purely on a hunch that I had ignored for an hour or more) I'd just changed the rods over, casting the corn right and the meat left when all afternoon so far they had been corn left and meat right. 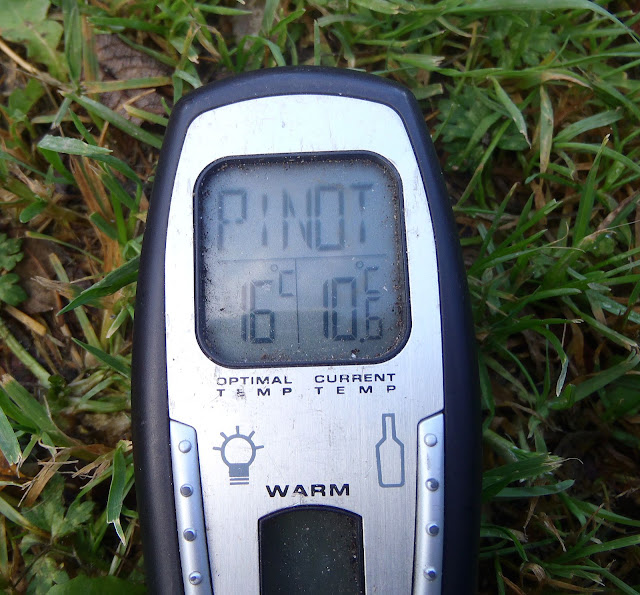 I took the temperature of the water on one of Judy's Xmas presents from Ben (son) that I'd co-opted just as soon as she opened it and pressed into useful service later as a fishing thermometer. I don't think anyone in our house truly cares exactly what temperature wine is so long as it's cold for white and warm for red but it's nice to know when you stick its long metal probe into the water that a good temperature for say barbel fishing is also the right temperature for the glass of merlot you've been idly supping when the rod top flies west!

The water temperature today was a healthy 10.6 degrees: bad for Pinot Noir but I hoped, good for carp...

A pair of young ladies pushing kids along the towpath in heavily over burdened buggies came into view. I entertained myself with thinking how 'funny' it would be if the run I had been expecting all afternoon occurred just as they passed through between me and the rods. Would I crash into them as the alarm sounded or would I remain calm and collected and wait ? I thought that I'd probably do the former as alarms have a strange effect upon the angler's fevered mind...

Ten yards distant, and by some freak of timing that saved me from accusations of child assault and attempted mother drowning, the right hand bobbin on the corn rod that I'd had a hunch about, twitched and jerked and whacked into the blank as the line flew out the rod rings. I made a beautiful slow motion lunge for the rod and bent into the fish which made a most satisfying heavy swirl in front of the pontoon...

The snapped line making pretty arabesques in the air. 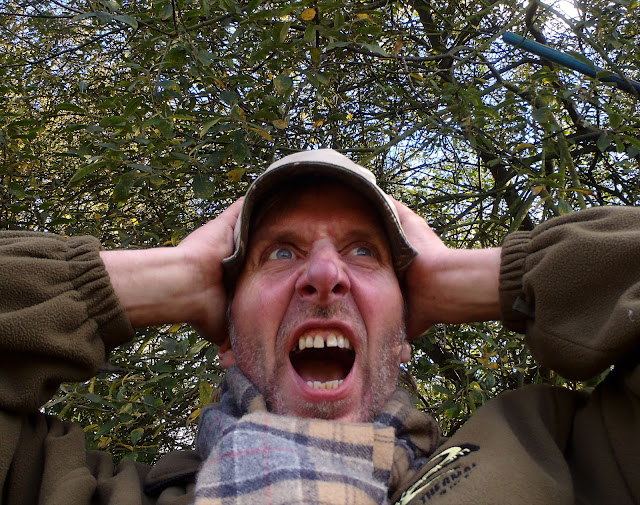 The line had given easily and under very little pressure, snapping just above the knot to the hook link and for no apparent reason. There was no pigtail where the knot had failed as palomar knots don't fail ever when properly tied and when improperly tied with too little lubrication which reduces the strength from near 100% to just 75%, always fail with a clean shear and besides, with balanced tackle (as this was) it's just not possible to break the line with the power of the rod alone and hard to achieve even at 75% strength - such a break requiring a straight pull down the rod or hand-lining.

The stop for the lead, a single BB specially prepared to slip on the line (I don't trust commercial safety clip systems - too many variables ) so that the lead always releases in the end should such a disaster occur had been slipped eight inches up the tail on the run so it had done its job. However, I hate to lose fish like this, so that was only half a consolation. This has only happened twice to me in the four years I've been fishing in the midlands: striking a bite from a large fish and snapping up for no conceivable reason: once with a barbel, and now.

There's no escaping it. I failed somehow to spot a defect in the line, some nick or wind-knot or abrasion or had tied the knot badly, or whatever...

And it cost me my first ever canal carp.