It's a funny old game. I fished one of the most exciting stretches of water imaginable just yesterday but decided, as this was my third trip to this gem of a water, that I'd now forgo all the pleasures of swimming the stream with a stick float and centrepin for most of the day catching one grayling after the other, a spectacular leaping trout every now and then, or hooking and losing salmon once in a while and when finally exhausted by it all traipsing down to the 'coarse' beats a little too late in the afternoon to really try properly for a big roach and instead of all that just go for broke
. Today roach would be my exclusive target and the whole from dawn till dusk I'd spend on them and nothing else besides. 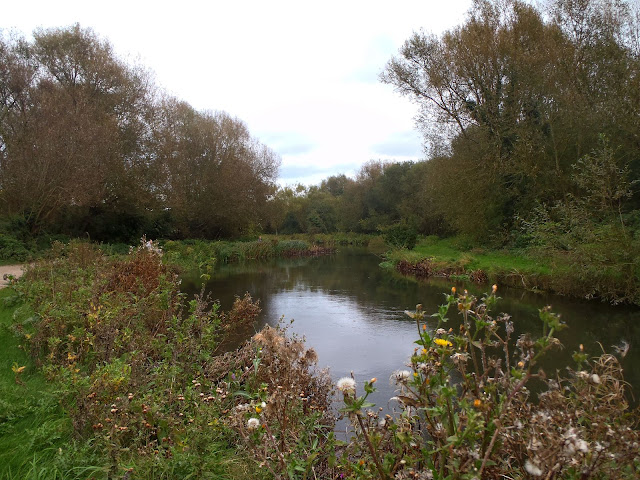 In my head it was clear ... the Lower Itchen Fishery contains all kinds of coarse fish but only one worthwhile pursuing exclusively... I know the grayling run big but catching a big grayling there is more a matter of time than anything else because the place is simply choked with them bank to manicured bank in the streamy runs with the vast majority on the very, very small side of big and fish of even a pound in the minority so to catch really large grayling you simply fish, and that is all you have to do. When one comes along it comes along.

The roach on the other hand are not nearly so common - even the small ones being hard to find amongst all the competition from other species and the large ones very hard to find in any case. There's plenty in there though. On the previous trips I'd seen them topping in the late evening and belying their presence. Of course some might have been trout, and a proportion of these 'signs of roach' were probably that but the trout tops splashily as it snatches insects from the surface and roach make neat round swirls and besides, I did once catch a one-pound ten-ounce roach under these swirls so I've convinced myself even if I haven't convinced you. In my book any roachy looking swirl is a good one and because the Itchen roach do run very big indeed with a reliable bailiff report of a three-pounder caught just last year in the free stretch just below the fishery and a long documented history of 'lesser' fish caught there too, I'll take any evidence at all.

The game fishery itself from above the mill and weir and well into the sticks, is, when it comes to coarse fishing, an almost perfect unknown quantity. Its exclusive high-priced gamey history was only 'compromised' just lately and brought into the eye of coarse anglers when the fishery management made the inspired decision to let us all have a go for twenty quid a day from October through March, sometime back in the late noughties. Consequently all the fishery management really know about the coarse potential of the water comes from catches over that time scale and the accidental catches made before that time by fly anglers.

The roach potential is good. Sash, who I have met on both the previous trips and who fishes the place regularly has had a fish of two-pounds-eight, quite a few nudging two and last February had a six fish catch well over the pound, most over the pound and a half and topping out at one-fifteen. Are there three pounders there too? Well, if they live in the free-fishing stretch below where they're available to any Tom, Dick and Harry then why not in the costly fishing above? Roach are no respecters of privilege, wealth and social position. However, because most coarse anglers who do fish the place are seduced by the incessant action they will get up in the gamey beats on the pin and maggot and turn their backs on the most infuriating but ultimately productive method of first finding and then catching really big roach - that of ledgering breadflake - the roach potential remains relatively unexploited and to a large degree unknown.

I was seduced myself and loved every minute of the brief affair we had but what would I rather do now that the gilt's rubbed to the brass and I'm facing a real roach river minus all the distracting sideshows that trout and salmon and grayling provide, is to focus and learn. I know full well that these large river roach are only located in certain places at certain times. They are not like the smaller fish who may form large, loose and eager shoals but always are in tight-knit family groups who never leave each other unless caught and even then will find their way back to the shoal very quickly on release. 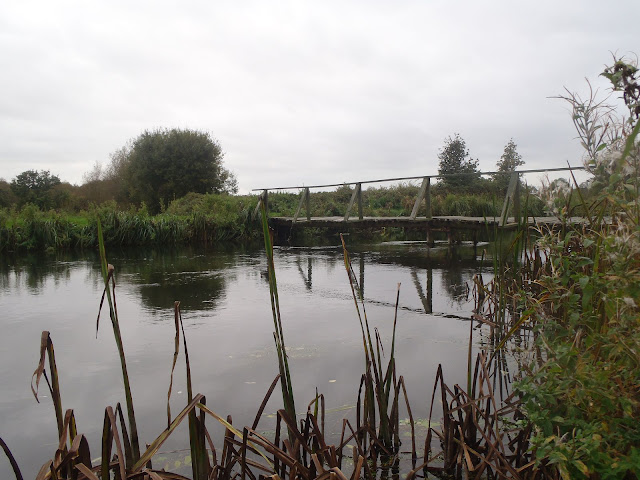 The river was full of old slowly decaying weed that hadn't been flushed through and this formed long flowing trails that would make fishing the shallower stretches impossible. I was sure this in itself would make it very difficult to find the roach as they would probably be in amongst it somewhere and would have to be coaxed out with feed placed above it in the few open gravel patches and even then they'd only move out as dusk approached. I was faced with a day of exploring every little nook and cranny I could cast to and trying out deeper water where the weed growth was minimal and all in search of a bite from a roach which is quite distinct in daylight hours from the bites of other species more inclined to snatch the thing in haste rather than merely investigate and reject.

First cast was into the very same spot where I'd had my one and only large Itchen roach two years previously - roach are creatures of strict habit and roach anglers like feral dogs who return over and over to the site of an old kill - the bait settled and within a minute the rod twitched violently and hooped hard over - not a roach. In came a very feisty trout.

No more bites came from my swim and Sash who was fishing the opposite swim on the far bank and also looking for but not getting roach bites, had only the savage lurches of trout and chub. Within half an hour we were both gone, Sash with his experience of this river telling him to go trotting till approaching dusk and my inexperience telling me to get what experience he had the hard and only way.

I tried a swim where I'd had a few probable roach bites last year: a short gravel run alongside a bank of streamer weed. It was barren this time around so instead of lugging gear down to the next choice I moved along just a few yards and tried a near side deep with just rod, net and a slice of bread. The first bite came in seconds but was missed, as was the next and the next. They were very like roach bites, but somehow seemed just a little too strident to be. Then the rod top lunged and I was into a fish - obviously not a roach unless it really was a three pounder - one that plunged straight into the streaming weed just under the bank. It was a chub, of course. A three pounder of sorts...

Then the rhythm of the bites became infrequent with the roachy bites all gone and just the occasional jarring twang replacing them - perhaps the commotion of landing that chub had spooked them? I waited and waited on and eventually got a twang that kept going long enough to strike. It was my first grayling of the day... 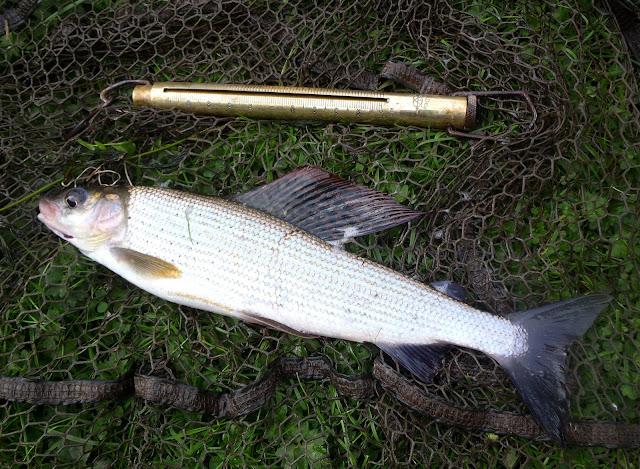 I moved and moved again, trying out the weirpool (concrete channeled run rather) and various other swims but ended the morning without landing a fourth fish of any species let alone a roach. This was most rum - a whole morning on the Itchen and with hardly anything to show for it - a complete inversion of what I had come to expect from my prior experiences - but that's what you will get if you go roaching out of hours, I suppose.

I made my way up to the hut in the centre of the fishery tired and a little miffed by the lacklustre morning, passing along the winding course of pristine river that itself looking somehow just as sullen as my own spirits, to meet with Danny, who I hadn't seen since early morning, for a bite to eat and a fresh brew out of the Kelly Kettle.

I wondered how he had fared but knew that it just had to have been a whole lot better than I had...

I needed good news, lots of it, and tea.

Part two in the pipeline