Have you ever seen anything like this canal bream caught yesterday afternoon? It's almost a crucian, in fact it behaved like a crucian - fought as hard, was netted and then just laid there in the mesh as good as gold, never paddled a fin, didn't flap about and his mouth barely moved either - I had to prod him just to see if he was still alive! He was, thankfully, and went back with a cheery slap of the tail and a vertical dive straight down. Then again, with a fish this shape which way is up? 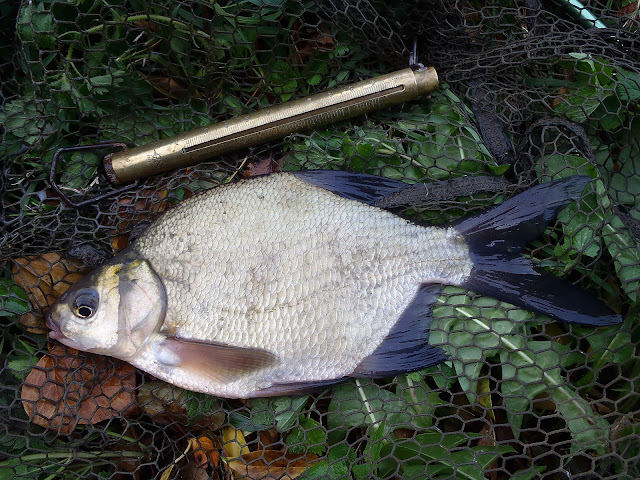 It's an extraordinary disc of a fish but it's all bream. The lateral line count is right and everything else is right, only in less space. I thought it might even be a silver bream x bronze bream hybrid but it's not that and it's not a skimmer either but a full grown adult even though it only weighed about a pound. The pectoral, pelvic and anal fins all overlap in this specimen but in a normal bream they don't even meet each other root to tip but have a gap, and look at the size of the tail fin and that 45 degree keel! The lateral line is all over the place too, so I reckon there's a few vertebrae missing, Arrested development perhaps, but one of the happiest fish it has ever been my pleasure to have met. 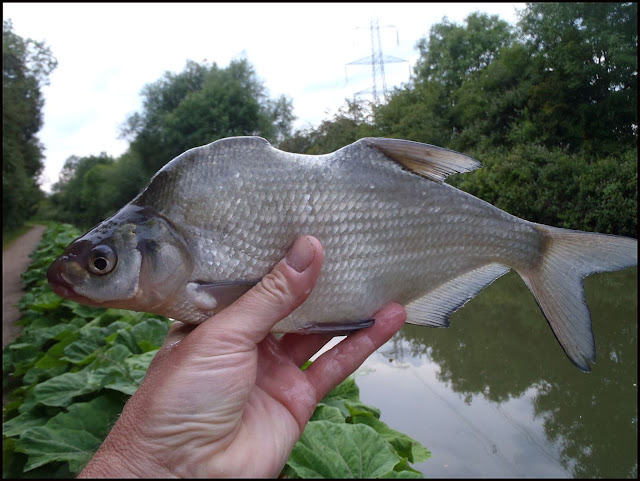 Then there's this bream from another place a couple of miles away (yep, under pylons, you can see the wires reflected in the water) that had absolutely no colour in it at all. The picture of the bream above was taken against the light so it only appears that the fins are colourless but were actually quite normal but with this bream below the photo was taken in thick overcast conditions and the fins really were completely transparent and the scales a uniform silver-grey colour from belly to back - A ghost of a bream. 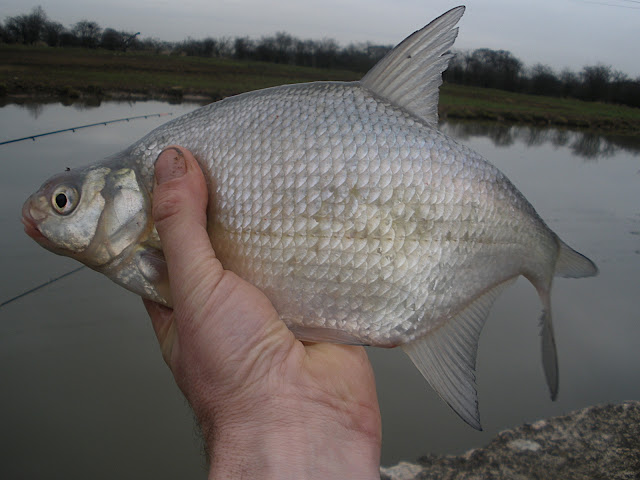 And lastly there's this roach. For the canal, quite a specimen at one-pound thirteen-ounces but not normal. She - has to be a woman - was simply enormous in girth but relatively short in length, probably as deep and thick as a three-pounder but only the length of a one-pounder. The picture doesn't show the thickness of the belly but she must have been all of four inches in that dimension. The fish, despite appearances was healthy despite having lost a few scales and being a tad overweight and went back kicking. 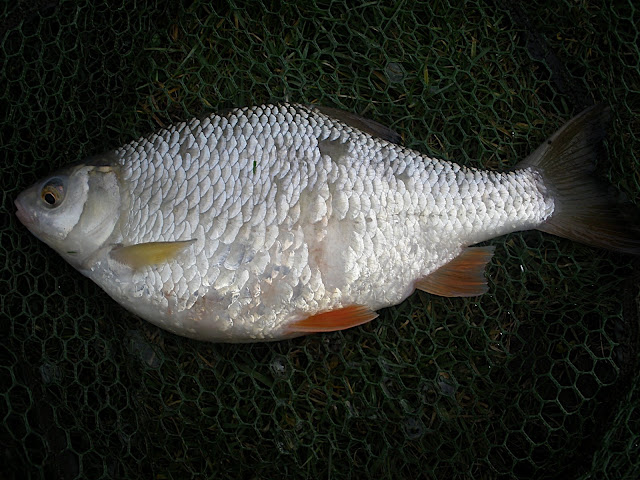 I have no idea if she was spawnbound, suffering from a dose of Ligula intestinalis - a tapeworm with a very weird life cycle that starts with egg laden bird shit entering the water where they hatch out and get eaten by the fish, the worm growing on to often exceed the body mass of the host and then the hapless fish, worm and all, eaten in turn by the bird  - or just a porker - but guess what? She was caught under pylons too...

I'm starting to worry about these pylons but round my way it's impossible to get very far away from them as there's no less than eight spokes in the wheel of major power lines radiating from the big switching station at Hawkesbury including the subterranean one that probably goes under my street en-route to Cov, and marching off in all directions. Since I moved to Longford I have never been able to decide quite where North is - ask me to point at it and I'll invariably wag my finger due West - ask me to point at London and I'll wave it Norwich way when it's actually South-East - I know for a fact that Longford Road running past my house goes due North out of Coventry and the weather vane on top of St Thomas Church outside my door was fixed in place correctly orientated but I'll still point in the wrong direction despite them both - but get me well outside Longford and I'll navigate my way anywhere you care to mention and without a compass as I have, like many men, an unerring sense of the direction of the North Pole.

I'm convinced my magnetic lostness is in the wires. Strangely, I have never felt saner than I have here so perhaps there's something to be said after all for being forty five degrees out of whack with reality?

I just pray that over time I don't shape shift, lose chunks of myself, albinise, or grow morbidly obese like these fish.