Steve Philips invited me over to Seeswood Pool the other evening. It was right at the end of the fabulous October heat-wave which has to have been the best spell of summer weather in autumn I can remember. It was warm and then the clouds of doom came over and the end of the balmy degrees we had enjoyed so briefly was nigh.
It was roach we were after and it took a fair walk to get to our pegs because a match had occupied the easy to reach ones. 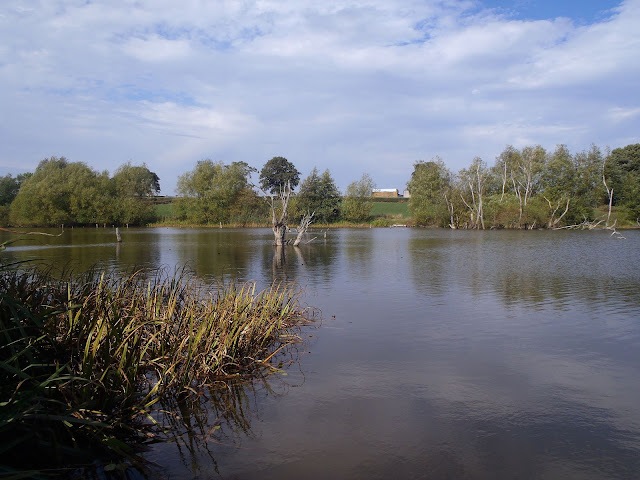 The lake is an old estate lake that looks to have risen in level substantially over the past half-century as the feeder stream end is now flooded and the trees that were once on dry land have been inundated and have died off leaving numerous stark trunks isolated in the lake on little islets. It's most attractive because of this.

Steve chose a roach hotspot off one of the islets that he has been fishing toward from a platform on the opposite bank but this was the first time he had got so close to it. Within no time he was catching, but I couldn't buy bites at any price. I ended up trying three different swim, and even one that gave me an islet of my very own to cast to, but the result was a resounding blank everywhere I tried. It was odd as some pretty substantial fish were rolling nearby but everything I tried made no difference at all. In the end I made up a maggot feeder and lobbed that around in a search for fish but it was a vain one - the tip just sat there pointing at Nuneaton and refused to move. Dammit! 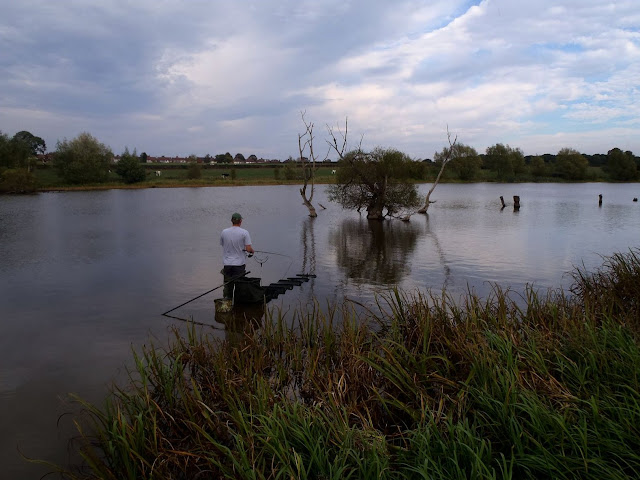 Steve meanwhile bagged up whilst standing up to his knees out in Seeswood's water looking like a seasoned pro. I felt like a tyro chump and was bound to the bank without waders. Then I spied a very large gull making its way toward the lake, actually it was more like a bloody albatross than any gull I know of, but then the enormous gull became just common buzzard when it splayed its finger like primaries and began to soar and wheel above the water. It had very funny wings for a buzzard though - as bent as schoolboy's bankstick they were - and then suddenly it just folded them tight to its body and plunged toward the lake crashing into the water, missing the fish it had spied and tried for , and flew back into the sky

That made my day fish or no fish. Never seen one before and in this neck of the woods never expect to see one again. I managed to get a few snaps of it when it was still a buzzard, as I had nothing better to do than that, and even caught one blurred shot of the beginning of its dive but only one came out well enough to see the bird clearly with, the rest were just blurred specks. 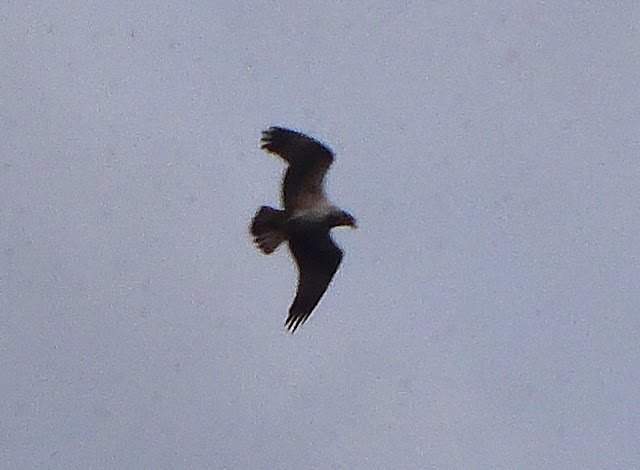 Later on my swim suddenly came alive and after having no bites for the past six hours had six on the trot and landed everyone of them. Two small perch, a lone hybrid and the rest small roach. At least something went right then.

At the end I took a few shots for Steve of his impressive net of roach and the brace of the best fish, both around the pound mark, the John Wilson inspired form of which with its two roach turned the wrong (but with a brace nearly always the right) way around that you can view here on Steve's blog.

We then got to talking about the difficulty of taking trophy shots with a self-timer and how they usually come out very badly, except that is if you are John Wilson who looks as if he could do a trophy shot of a brace of near three pound roach in a head-stand yoga position and it still look good.  I have terrible trouble myself despite being a disciple of Wilson as I only allow myself three shots before the fish has to be returned and sometimes that's just not enough time to sort out all the things that can and do go wrong and get the balance right. 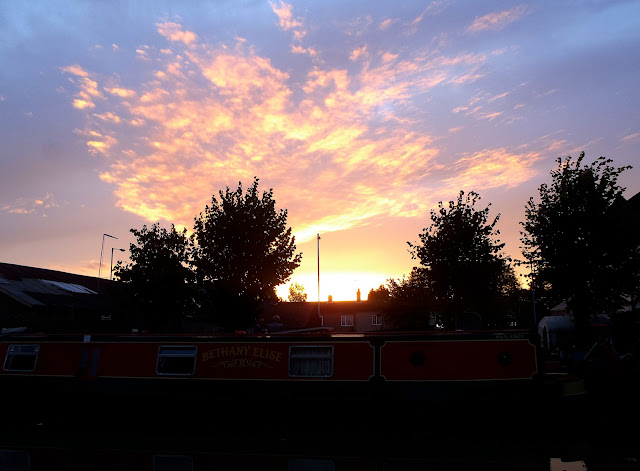 I went up the canal a few times to fish bread for the pain-in-the-arse roach there. The first session everything seemed to be going according to plan with bites over the mashed bread coming right on the twenty minute mark and then increasing in frequency but I couldn't him them. Later, after more than an hour of this I finally found out why - the bites were coming from tiny skimmers who couldn't get the big bait in properly - the roach were elsewhere.

I tried again but this time it took ages for the bites to start but when they did the first fish was a decent roach of one-pound, one-ounce - I really thought it was bigger but these bloody-minded brass scales of mine refuse to lie. I checked their verity when I got home but they were spot on, not even a dram out. A pound is a pound is a pound...

The fish went in the keep net in the hope of a brace and to keep the fish well away from the shoal but I never got another, just a few skimmers and then a boat came through and wrecked everything just when the bites were coming every put-out. I have no answer to this. The swim just refused to come back to form afterwards and the same has happened every time a boat had passed while fishing the boat track with bread groundbait.

The camera was set up for a trophy shot. I have studied this esoteric form of the photographers art long and hard but still it never ever goes completely right. I have even taken to practicing with a pair of beer cans and this does help especially because to be faithful and accurate the beers cans must be full just to emulate the actual weight of the fish (and unopened to avoid spilling a drop).

One-pound two-ounces eight-drams they are. Just weighed one for reference. Which is just so.

Anyways I was to shoot three with the light in my face - the first rule - and made sure the background was OK, not enough detail to tell exactly were it was shot but enough to say 'canal' - which is the second rule - and then proceeded to break all the next rules one by one till the final shot. The fish was returned and the shots reviewed off the camera's back screen. 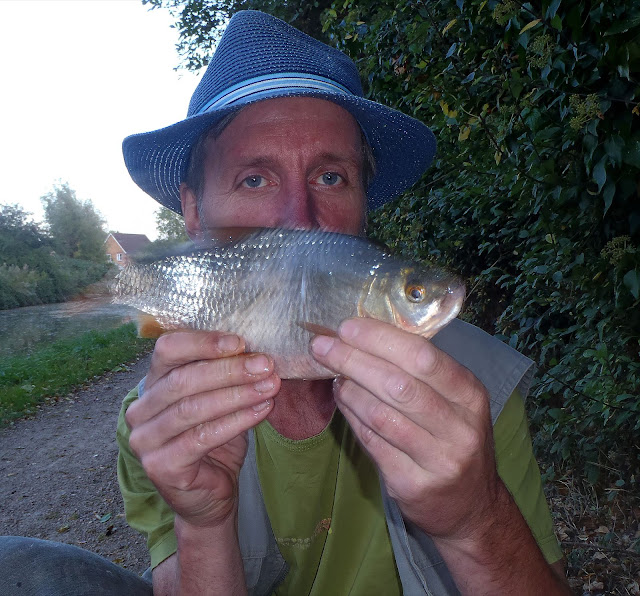 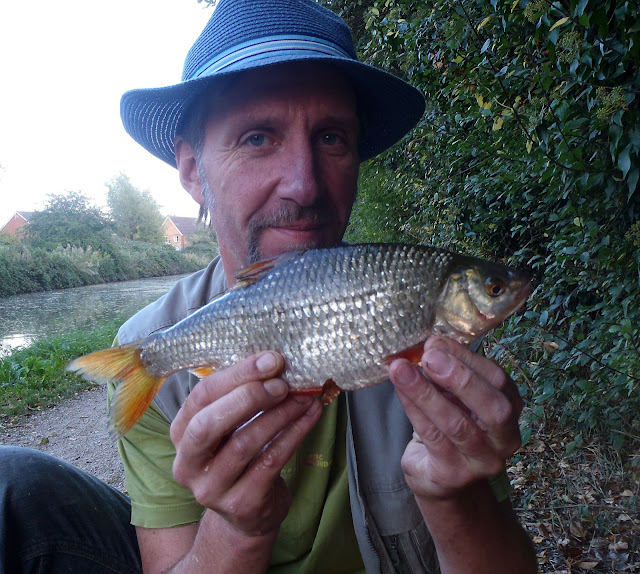 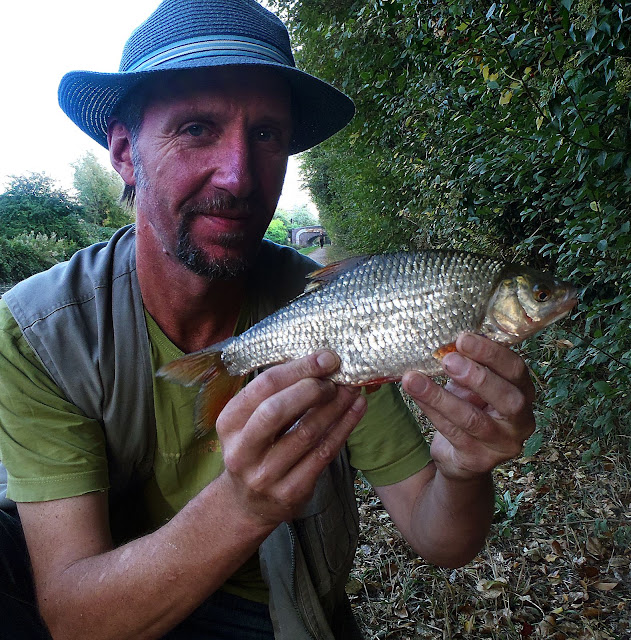 Hoorah, something to work with. Not perfect but John Wilson would be proud of his student - fish off to one side, near enough to the body not to be an attempt to puff up its size and the proportions are OK, the fish and the captor are just about in the right relationship to one and other - shame it wasn't a two... It's sharp enough, shows off my port-sodden nose and battered-cod complexion beautifully and the lovely roach is proud and unperturbed - the canal can be seen but not recognised and even better, there's a little man in the distance framed by the subjects and vegetation who lends a certain quotidian reality to the whole thing just like the little passing ship in Gericault's 'Raft of the Medusa'...

Just needs a tweak in Photoshop. The photo that is, not 'The Raft'.