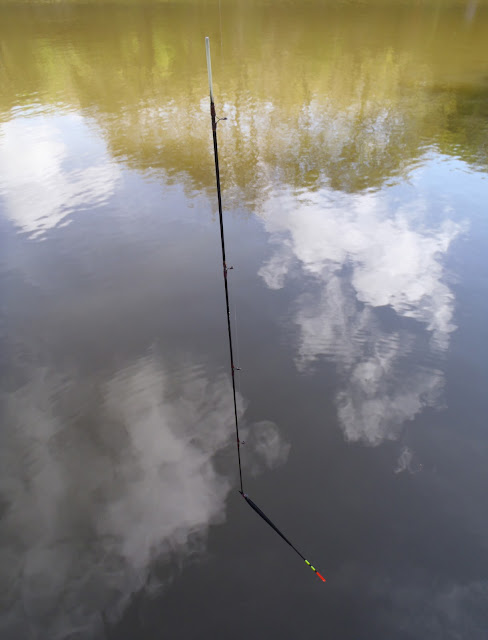 Sorry for my sad broken rod, its tip dangling uselessly jammed against the float, I pushed the glass splint back in the splintered carbon socket and retired it to the quiver, perhaps for ever.

Amazingly the hook and line had held fast but how I don't rightly know. The hook used was a spade end pattern just perfect for roach fishing made from a fine wire so flimsy and malleable that I'll employ them in snaggy weirpools because they open out wide and ping off but can be forced back into shape once out of it so that I can fish on regardless.

It was still in perfect shape — though it should have straightened!

The trace was nipped off, hitched on to the line of my back-up rod where it would perform its duty the rest of the morning. Why fix what ain't broke?

My fortunes then plunged, bites becoming very hard to find, timid when they came and very hard to hook. I thought it might have been the disturbance caused by the carp that had caused this but a walk about and a chat to others checked out against my own experience. The market in bites had popped and collapsed. 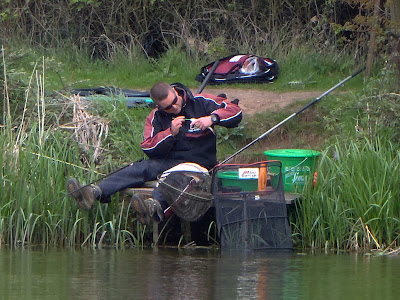 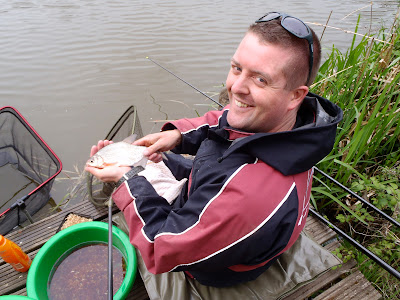 However, Phil had begun to fish like a demon. His heavy groundbait and caster approach rapidly filling his swim with every fish in the lake it seemed because he was hauling them in so fast he was a blur of action by contrast with the stone block stillness of every other angler there.

To a match angler such as Phil this must be the best thing in the world — having your planned approach pan out and you outperform the rest of the field because of it. I like quantity equally when it comes but it's the size of the individual specimens amongst them that interests me most so my approach is always to bring out the best fish in the shoal and avoid the small ones at all costs.

Seeing as I wasn't getting much in the way of anything, I doubled my bait size putting two bread discs on instead of one creating a monster munch for any specimen that loitered about it. That failed too. It just sat there in the water forlorn and unloved. How could this happen. Bread last week and this morning too had reigned as crowned sovereign of all subject baits, but now was deposed and in exile.

There wasn't much else to do but go sit with Phil, watch him catch for a while but snaffle some groundbait from his capacious bucketful while about it. That failed also. Four big balls of the magic stuff I pitched in, but nothing happened. They really were in his swim only!

Soldiering on I finally did hook a few others, and they were the biggest silver bream of the day for me, but then I caught something that really caught my curious eye, that I have never seen before and very much doubt anyone else has either, for I believe it may well be the only specimen of a rudd/silver bream hybrid recorded in the entire history of British angling... 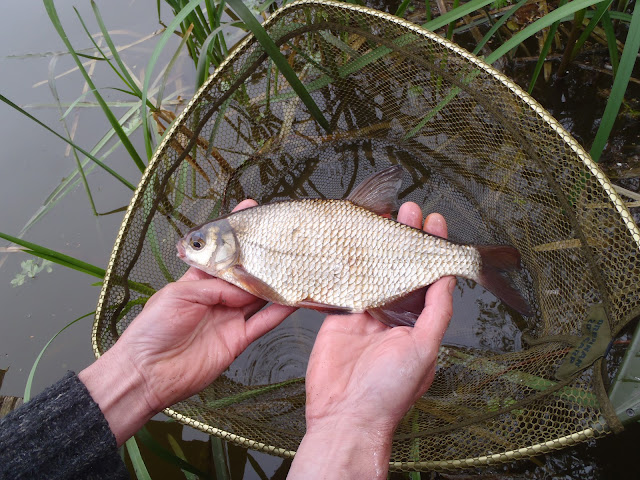 It's hard to say for sure. I would have thought such a mongrel would have been much deeper than this was, the rudd's keel and the silver bream's high back combining to create something altogether chunkier, but I don't know what else it could be considering the reservoir's total lack of bronze bream and roach being the one other possible candidate for silvers to cross with there.

It had vermillion tinted fins and tinges of gold all over it, so it had to be rudd what did this thing because I don't believe that silver bream can cross with crucian carp can they? No, that would be an abhorrence to Mother Nature, surely? Like crossing hippo with gazelle, quail with kestrel, wouldn't it be?

When we called it a day around 2pm, Phil pulled his net. I hadn't used one so couldn't sort through a stack of silvers to find another specimen of this odd fish, but hoped we might find something amongst his to back up my theory. When he hauled it out it was bulging with fish of all kinds — silver bream, crucians, tench, roach, perch, no more possible rudd/silver bream hybrids unfortunately, but...

Yes... it contained the evidence I required of the possibility it might actually be true in the form of a solitary but perfectly pure rudd!


I don't get out of bed for ordinary fish, but do get out of my pram for strange or exciting ones. I love the unusuableness of fish, like them in their mutabilitation and adore their adaptationable nature. If fact I love anything about fish that makes American word processors and blog dashboards underline the words I write about them in strings of red warning dots alerting me that I've overstepped the mark and bastardised the purity of the mother tongue, again.

At least one of those that stopped you in your tracks could feasibly be a real word, though... just like my fish it exists only in possibility and probability but no one has ever seen it before.

It's just a shame you can't see it glowing your end, but it's a very pretty hybrid here at mine!