Gold, Silver... and Fast Running out of Shot!

The first sight on approach to a new water is always quite something isn't it?  Like catching a fleeting glimpse of breast through a diaphanous blouse, when I clap eyes on that branch-broken flash I tend to lose my footing, each step thereafter a hazardous guess! 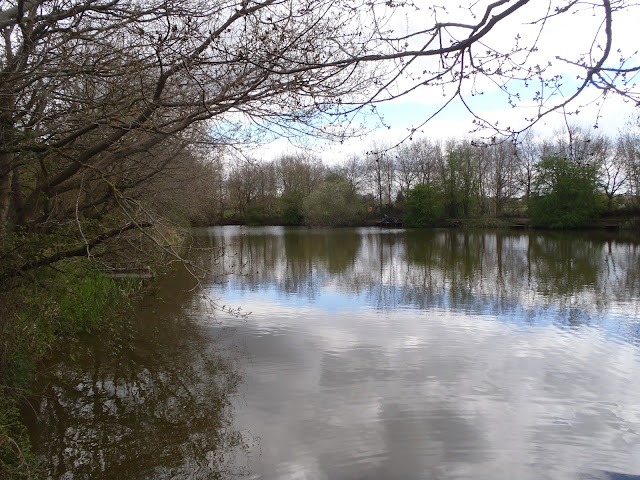 It seemed bigger than I thought it would though I knew full well it was actually smaller than just about any pond I've fished the past years because I'd measured it on aerial maps just to get some idea of what kind of fishing it would offer in advance — degrees of size being quite an important aspect of ponds that are too small to be lakes.

We chose a couple of pegs at the very end of a narrow pathway where I took the furthermost, Martin the perchiest looking. It was a bit of a mistake to choose what was a very tight swim surrounded by trees and bushes, left, right, and above head height. Actually the mistake was in taking a thirteen foot rod into it and leaving my ten footer at home, as I was soon to discover... 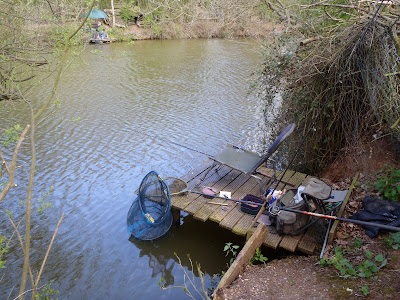 I'd three baits with me. Maggots, caster and bread. A couple of handfuls of maggots to get things started and first cast plopped the float perfectly over them only to have the line caught on a twig to the left. On retrieve the rod top tangled overhead, the float dangling just out of reach.

Every cast now an exercise in fuzzy logic, advanced ballistics and getting the tackle back to hand a gymnastic exercise, just one less foot of length would have made life easier, three a doddle, but I'd two feet too many for such a tricky swim.

A couple of tiny perch and a roach came along after a twenty minute wait for first bites. Martin had a good roach that seemed to indicate we'd have our fun with them as the day progressed — he even had room enough to fish a sleeper rod and was getting bites on worm perhaps from big perch.


The float shot up in the air about as far as is actually possible without keeling over — the antennae rising out of the water in a fraction of a second and not just half but the entire six inches of it! One of those eternal seconds where time ceases its infernal ticking, mesmerised by the preposterous transition from dotted down to full erection, I failed to strike — but up it stayed, swaying like a yacht's mast in a heavy swell.

I don't think that many quite believe me when I talk about just how shocking bites can be with this 'trigger shot' method of mine. Believe me, you have to see it to believe it so you can be forgiven if you haven't yet tried it out.

When I finally snapped out of my funk and did strike, the rod hooped over as a strong and dogged fish ran loops around the staging.

First crucian of the year! 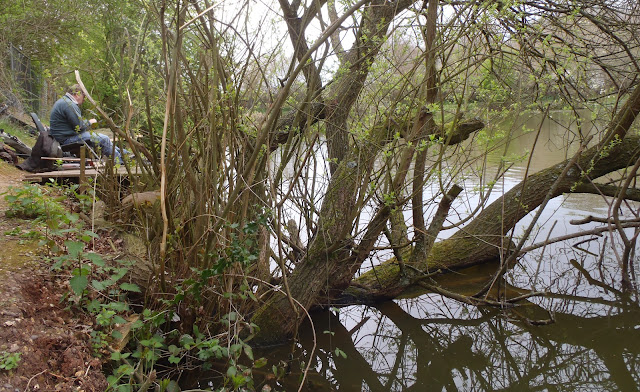 That's about when Martin started catching them too, on what crucians love most which is corn. I was sorely tempted to go all out for crucians too and go raid his one tin supply for a handful of the precious golden nuggets, but held myself back and stayed with maggots hoping for an altogether more silvery fish to show.

I'd heard rumours it contained lots of these particular 'hybrids.' Didn't know if it really did. Hadn't seen one after an hour or more of fishing and was just starting to believe I'd conned myself when one turned up to prove their existence after all. It was small, insignificant, but pretty. Just the kind of 'hybrid' I like to catch! 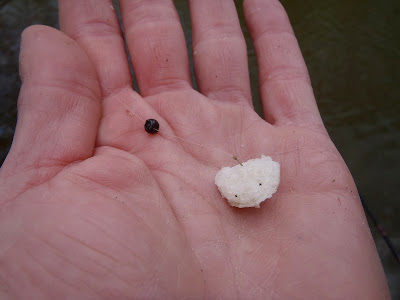 What I wasn't prepared for was the moment I decided to stop struggling with maggots, go all out Jeff Hatt canal stylee, and ladle in a couple of handfuls of mashed bread. Choosing the smallest cutter I had at around 12mm, I punched out a disc of the 'Mighty Blue' and carefully swung it it out. The float cocked against the pendulum bulk, three seconds later the trigger shot dragged the bread past when the antennae sank to the tip, then it shot straight back up again.

Clonk. No mistake this time! 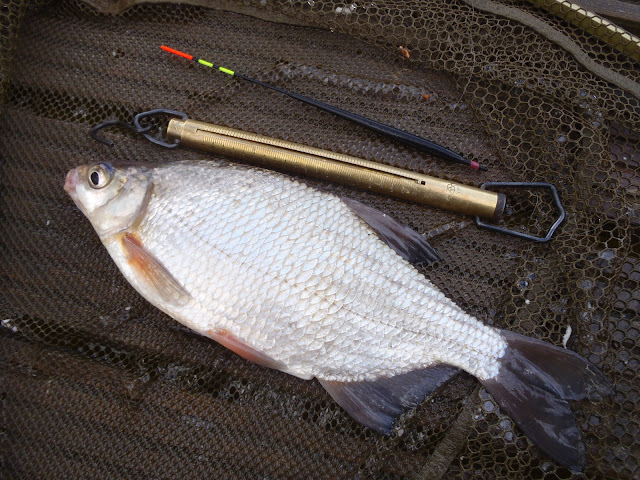 I was in a state of euphoria. Back home on the cut I'd have to stalk these blighters down to strict locations, work my hairy nads off to catch the first, and then be very lucky to catch many more before they'd vanish for another year, yet here I was pulling them in like flags along a string of bank holiday bunting. It was marvelous hybrid fishing, and Martin was enjoying crucian fishing every bit as marvelous too. We were having a marvelous time. Very, very marvelous. 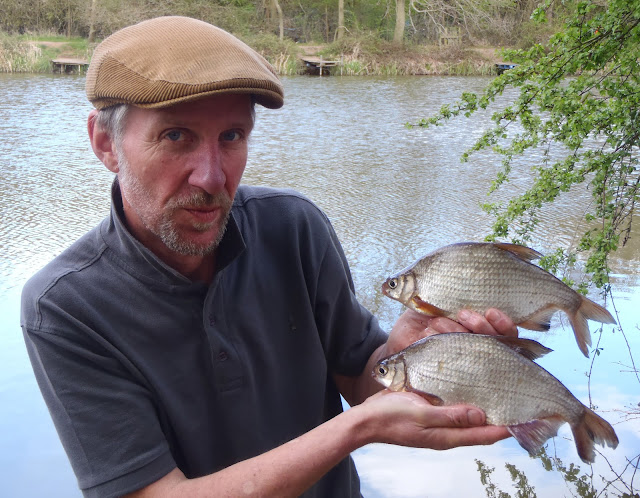 What wasn't so bloody marvelous was my swim. Eight hooks later, two disc cutters rolling off the staging to sink from sight and fast running out of shot, I called quits, upped sticks and made off to somewhere less costly in terms of ironmongery.

But would the hybrids show? The answer was not only would they, but using my only remaining disc cutter at a massive 25mm, I started getting the stamp I was after too including a new stillwater personal best for the 'species.' Gonna need a bigger punch! 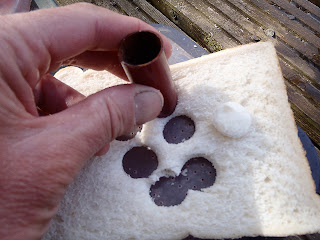 They were now taking swollen lumps of soggy bread the size of a bloody walnut, a bait which dangling on two-pound line looks nothing short of farcical, but they were having it large! Then one really did go 'clonk!' The rod curved over hard when I started to panic thinking I'd have an overall PB in the net should things go well. It might have been a crucian but Martin hadn't had one since noon and I'd hooked not one on bread all day long. It had to be. Just had to be...

The only breakage out of what seemed like an endless succession of hundreds but actually caused by a fish, the two-pound line parted above the shot. Naturally I dismissed it as nothing more heartbreaking than the loss of a small male tench. As you would! 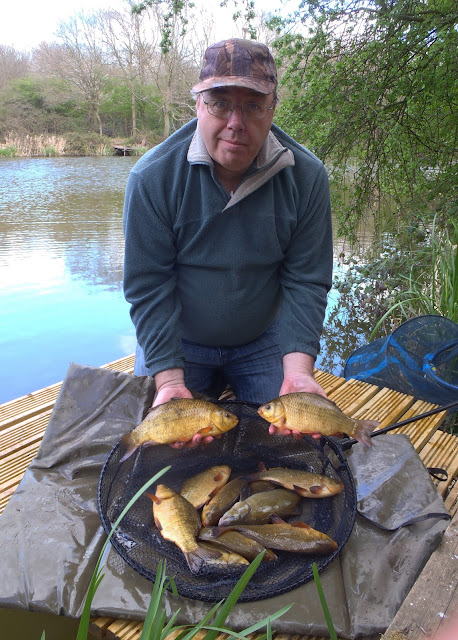 We wound up the day around six, pulled nets and admired our catches. Martin had a haul of crucians the like of which I've never managed, whilst I'd had more of what I'd come for in just the one session than I've toiled from the canal over three years hard sweat and effort. 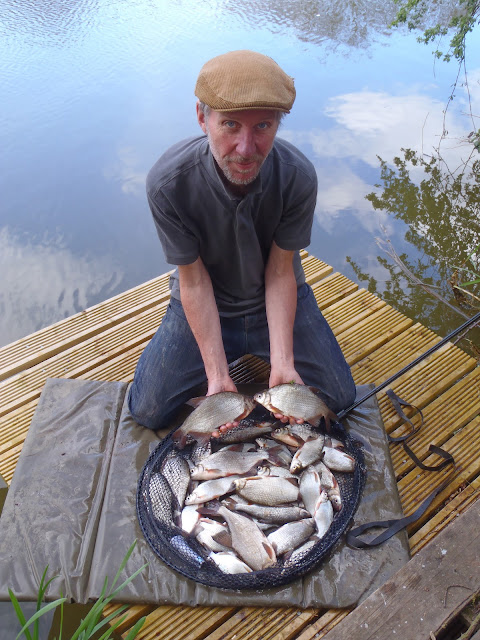 I think I mentioned before but it's worth repeating once more if I didn't — it was marvelous fishing! 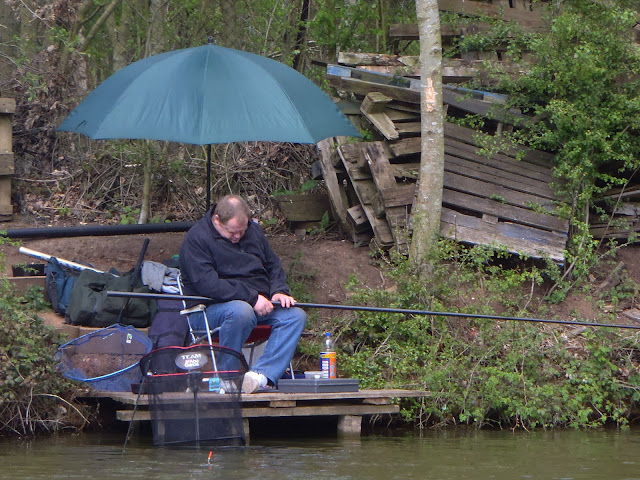