There's a countrywide movement of enthusiastic amateur involvement in river rehabilitation. Streams all over Britain are in process of an overhaul, their habitat shortcomings rectified and potential maximised not only for the health of river environments, but also for angling too. And that is all to the good.

Much of this work consists of really heavy duty and to my way of thinking, heavy-handed manipulation of the watercourse concerned. A project is considered, cleared by someone high up in the chain of command and then implemented by a gang of hard working volunteers dressed in waders, hard hats and goggles, the director of proceedings with his clipboard and pen ordering this tree to be lopped at the trunk with a chainsaw and turned into the river as a deflector and that channel to be revetted, backfilled by machine and pinched.

Such projects are funded of course and have strict budgets and time deadlines to meet so they're military style operations following a well-planned strategic program of work designed to have the river improved beyond recognition in short order. To this end, presumably a blueprint is drawn up of desirable outcomes and maps are made that show where obstructions are to be introduced and at exactly what scale and these decisions are probably derived from existing flow data modeled into desirable shape by computer.

I wouldn't have thought them in any way haphazard or intuitive...

What's remarkable about such projects is just how many of them are focussed upon chalk streams and the like and with providing suitable habitat for fish such as wild brown trout, migratory sea trout and salmon. I would say that the vast majority of funding moneys currently spent on rehabilitating rivers are spent on those boasting both peerless chemistry and biology and the best chance of having a future as a prime game fishery should things be improved. It's business after all...

When I delivered the menu on offer for the fish of the Sowe I knew full well what a split viewpoint it would create amongst readers. Coarse anglers would see the superb food supply as the staple diet of roach that might grow very big in the future should habitat be created for them, but game anglers would not be concerned with that in the least viewing the river from an entirely different perspective. They'd  not see a roach fishery but a wild brown trout fishery in the making, because that's exactly what its habitat of pool, riffle and glide, pure water and hatches of the right kinds of flying insects suggest it could be.

I don't have a problem with that.

Many game anglers are not principally concerned with catching fish, per se, but are interested very much in the why and wherefore of how they are caught and the natural beauty of the places where they are found and beside getting up to their chests in water in order to fish rivers, adore small streams and their technical challenges like no other and tend to become deeply immersed in their continuing and future health in a way that coarse anglers sitting on the bank at a remove rarely do unless it's about improving access and creating comfortable habitat for themselves.

That is why the vast majority of the spend on rivers goes where game fish are. Not because they deserve more attention than coarse fisheries — they don't — but because game anglers are so determined to have their rivers healthy they'll quietly organise and then move bureaucratic mountains to ensure they are.

The list of their achievements is long, and when it comes to the rejuvenation of urban streams such as the Sowe, astonishing, because only they saw the potential early and considered what great fisheries they could be once again, pulled themselves together and created organised bodies to secure money and then worked very hard to achieve that end by getting stuck in where it really matters — at the level of the river bed.

We coarse anglers have a lot to learn...

And a very long way to go before we come close, let alone match their commitment.


Driving my 'work' on the Sowe is a passion that I admit began as pure self-interest but without which I would never have bothered. I always adored this little river as an angler because it was such a challenge but so rewarding to fish and then somehow and for some reason I began to look deep into its shallows where I saw what was holding it back.

Then naturally I wanted to see what could be done by trying to improve things but as cost effectively as possible, which in my situation means at the price of nothing but graft, utilising what is already there for free in the way of plants, rubble, sticks and rubbish, in an effort to harness and direct the tremendous power of flowing water to create a more natural course for a despoiled river and a better habitat for its very few but remarkable fish.

I think I've achieved something small but locally speaking, significant, though I can't claim credit for placing a few rocks under a bush and knowing what would happen after — I only remembered I'd done it when the floods came and never seemed to go away! It was nothing but a happy accident.

But it suggested great things could be achieved without funding of any kind — all that was required, actually, was the enthusiasm of a solo amateur who hadn't a clue what he was doing, the river taking care of mistakes by sweeping them away or ignoring them but taking advantage of small things, well-placed.

And finally, closure.
This morning I returned to the pool and peered keenly through the lens of its crystal waters to view the complex world of its aquatic life. They were still there, the minnows and perch, involved in a curious oscillating dance of threat and fear, retreat and peace. I suppose the perch are husbanding their resources, knowing they can ill afford to consume all the supply all at once. The roach were gone though, and that concerned me greatly because they were what started all this and why ultimately I bother with it.

Perplexed and disappointed I made my way along where in the second, shallower pool I saw nothing at first but adjusting my focus I then saw hundreds of fish too tiny to be the adults of any species no matter how small — it was full of fry! Minnows I'd have thought, but the way the perch were eyeing up the parents they'll be needing all the recruitment they can get...

An hour later after messing downstream observing what hadn't happened and thinking what might happen should I do something else I decided to do nothing at all and made my way back up. There's a thin and fairly deep strip of water fringed with reeds and brambles I'd ignored all the while never intending to change a thing about it because once upon a time in my early reconnaissance trips I'd earmarked it as prime roach territory should it ever deepen enough and gain cover.

I took a quiet look into the water seeing nothing but dark silt but then the dogs turned up crashing through the undergrowth when a flash of silver followed by a train of fish darting upstream gave them away. Dogs are good for that you know — springing fish from their cover!

They calmed down, resumed order. Discovered and known to be around they were now quite easy for the eye to appreciate despite their camouflage. The dogs cleared off and I watched them for a while in peace when cruising along came an old friend — the only roach I know by name in all the world — who with an old white scab high upon his otherwise invisible back had given them away once before only to be caught himself a year on...

A roach by any other name and what not...

I'd fished for the very shoal he'd always been a member of just after the floods had subsided but they weren't where they usually were. I thought they'd gone elsewhere, to a place close by but one unknown to me, but now it was clear that they'd traveled much, much further from home than I'd ever have thought possible making it all the way up to a new one I'd helped create.

That was enough. I'd built it, they'd come, and my work there was done.

Who can say what the next floods might bring...

And what I may bring to them.


My sincere thanks for sticking at it, staying with me through this long-winded thing, 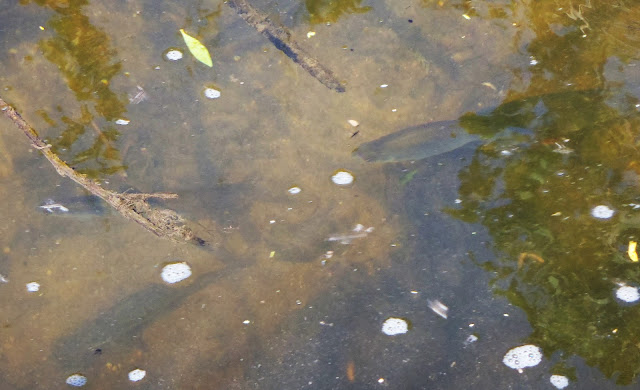