Build It and They Will Come — Dammed Hard Work (Pt4)

When I began messing around with rocks and sticks in other places I thought that things would be as easy as they had been — one small intervention, and "viola!" — total transformation of the river for 100 yards downstream. But, it isn't as easy as all that because placement is so critical that should an obstruction be placed badly then it has very little effect, as I was to find out.

There's lots of rocks available down there, none of which are natural to the stream. They are very useful to me though because they're handy portable building blocks that can be arranged on the river bed in various ways, the effect monitored, and if nothing of any consequence seems to be happening then the structure can be easily dismantled and erected elsewhere.


A groyne was constructed downstream at the same scale as that placed under the willow upstream just to see if rocks alone would achieve anything. Unfortunately the effect of a spate was negligible because the turbulence caused was directionless, just boiling over and dissipating uselessly. When it was at its highest, the groyne vanished below and the water ran straight over it as if it wasn't there at all — when it subsided no effect was measurable apart from a freshening of the gravel directly behind, none of which had moved even an inch.


The next willow downstream looked as easy to play with as the one that had had so much effect, so I dismantled the groyne and repositioned it below the branches, but this time installed a number of large dead branches between and plugged the gaps with dead vegetation, emulating what a heavy flood would achieve of its own accord.

When a spate did arrive the whole lot disappeared below the water and seemed to be doing its work, however, when the waters fell away I went back and saw to my dismay that it had achieved very little, in fact it hadn't altered the river bed and had hardly begun scouring the stones of their covering of grey/brown algae let alone move them.


The problem wasn't that the thing wasn't doing anything, it was. It narrowed the channel and caused all the water arriving from above to pass through a gap half the size of before. The trouble was that the water arrived at it with the heaviest flow along the far bank then passed straight on by without having much of its energy diverted. Consequently, very little turbulence was caused and what little was caused was linear.


Compared with the original successful experiment which in hindsight was entirely fortuitous, this structure was created upon knowledge I thought I'd gained from it. What I had failed to appreciate was that whatever happens downstream of such a structure is entirely conditioned upon what is already happening upstream of it and here the water arrived at the wrong angle which was no angle at all.


Taking a second look at the original willow groyne, it was clear the reason it had worked so well was because the heaviest of the water came it hard, backed up in a reservoir of pent up energy compressed by that coming along behind, then plunged downward taking most of its force to the riverbed where I now know it scoured almost three feet of gravel away creating a pool approaching four feet in depth with its deepest parts immediately below the obstruction where the bed now shelves away dramatically. 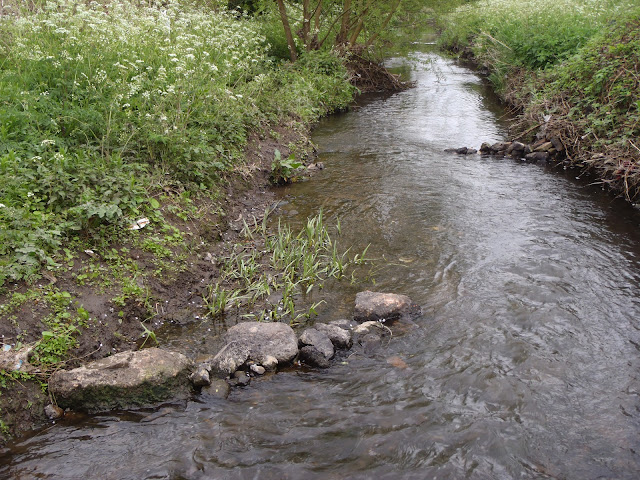 Of course this meant that if the second willow groyne were to work then something needed to be done to divert the water straight at it. So, I had a play about with rocks and came up with something — a double groyne in the approach way. In the picture above the first groyne is actually far smaller than the second and there to hopefully protect the area behind where rushes are already trying to establish and that I intend to consolidate with a backfill of rocks, gravel and silt otherwise it'll do more harm than good come the next flood, the turbulence caused ripping out the entire bed.

The second is a pretty substantial pile of rocks by comparison and designed to force the water across into the shallow area immediately upstream of the willow. As you can see, it does just that at low water. What it'll achieve at high water though, I haven't a clue! Though I do think it isn't large enough to really work as intended, but... 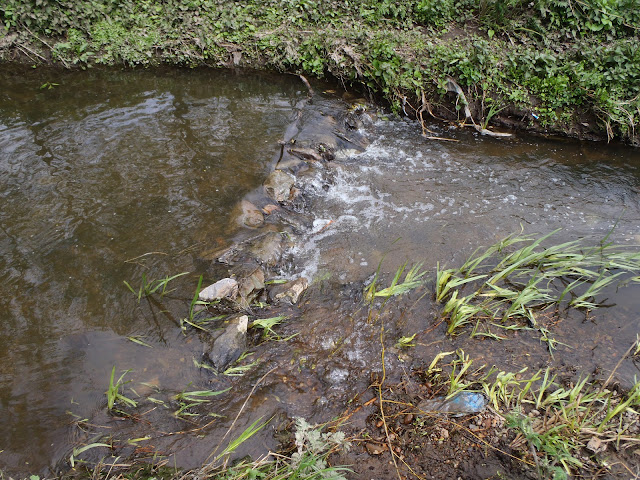 The last experiment was a loose rock dam that increased the depth of the shallow silted pool behind by a good foot as soon as it was built. In a spate it too disappears but the effect it has at the river bed is quite strong having shifted gravel and scoured it clean in no time. It doesn't seem to impede the progress of fish either because the roach and perch now resident in the pool 100 yards upstream arrived some time after construction.

The trouble is, the pool behind cannot get any deeper than it is right now of its own accord, and might even silt right up if I can't do something to create depth that will self maintain, and that's a headache, especially because I really don't have clue what I'm doing until I've done it, watched it, and learned my lesson!

Perhaps I'll dismantle the dam and use the rocks to create something else above the pool that will help deepen it enough for fish, because even raised by a foot in level it's not nearly deep enough for that without shady bankside cover to live beneath. What that might be though, I don't rightly know but I've heard that V-shaped groynes pointing upstream do scour well below...

Whatever I do attempt next I'm mindful of the need to not get carried away trying to further improve upon what is already improved out of all recognition. There's absolutely no need to interfere with the course between the deep pool and the rather interesting set of features created below — they can now take care of themselves and the river do the work of maintenance.

Everywhere else though? Until the watercourse there starts to approach the structural conditions that both you and I know comprise those of a healthy river fishery just from its outward appearance, then little offense can be caused by my experiments (except not having permission to run them!) but a great deal improved upon because as it stands it's a very long way from being one.

And that's a shame, because it certainly has the fundamental requirement that supports a good head of fish, and that's an abundance of Nature's Finest.