Thumbing through this month's issue of Total Coarse Fishing, I flipped past page 67 but turned straight back because one of my firm favourite things arrested my eye mid-scan. What I first thought to an advert turned out to be little piece waxing about the virtues of the ABU 505, mother to my own tried and trusted 506.

No company ever offered a lifetime guarantee did they? Well ABU had such confidence in the indestructibility of their reels that they once upon a time did. I always loved their engineering and own no less than six of their reels because of their bulletproof quality but it was with some trepidation that I first handled the little beast, not because I didn't trust its build — that would be beyond reproach — but because it was such an unfamiliar a tool in the hand. 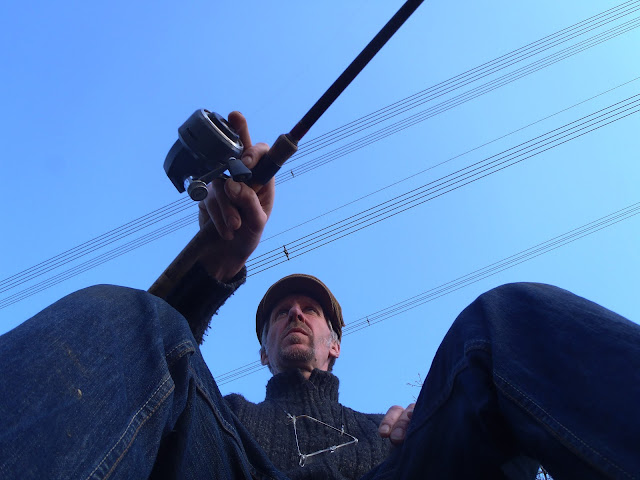 It was a gift from Martin Roberts so I was determined to master it, but it hadn't been serviced in years so first task was to strip it down to parts, scrub, wash and rinse all the components in meths, then re-grease the pinions, pawls, spindles and gears and put it back together. I wouldn't do this for many reels, but there's something immensely satisfying about getting to grips with the internal workings of ABU's, a fact that any fan of the marque will attest to. Once stripped and rebuilt successfully, it's as if only then do you really understand how to use it.

Afterwards it was as smooth as butter so next step was to fill the spool with line and actually use it in the field, but I have to be frank, at first I found it a bloody nightmare and like Dick Walker who legendarily found it's weakness with large carp but failed to appreciate its true strengths, was about to chuck in the water when I realised that the problem was not that the reel was faulty, but that I hadn't read the effing manual...

Finding it very strange on retrieve (it's very slow anyhow) and prone to tangles, I tried to see what was wrong with it only to find after an hour of looking for the root cause that the spool needed to be located on the spindle and then turned to lock it in place. I'd been using it unlocked and spool loose for hours and suffering badly!

After that it was a dream. It was a miracle not to have to use two hands to prepare to cast — one operating all the relevant functions.

Once accustomed to the particular grip you need to employ it became automatic and for sheer speed and control surpassed anything I'd ever used in my life.  No need to fiddle about flipping bail arms back and forth, just click the button front of spool then cast by releasing the trapped line off your middle finger (the ad is wrong about that!) and in no time it'll become an easy and fluid thing to perform uninterrupted by thought.

How would it handle fish though?

I wasn't sure if it could handle big ones — it seemed purpose built for small ones and they were no trouble at all. The 'Auto-Syncro drag' it possesses I just didn't understand in principle because nothing thus far had had the strength to actually demand line...

Then I hooked a tench up the canal one morning, when things became as crystal clear as the water in the wake of a boat. That fish had me all over the place. It went here and there and I had no choice but let it go. One minute the reel was locked up, next line was spilling out, but not quite when I wanted it to. It was a very big fish for the canal too and one that might have beaten my newly set 5lb 8oz canal PB. In the end it got it into the reeds where I lost it...

So I was forced to read the effing manual once more where I discovered why I'd lost control. You wind  forward to lock the drag, and backwards to release it. In effect this means when you get to a position where you are in control you take line against the fish but when you must give line, naturally you stop winding when the drag kicks in and gives the fish what it demands.

Once mastered this rule becomes second nature, in fact the illustration of this was just last week when I managed to bank a very difficult customer who broke the rod, but the reel was always in control of the situation. I wouldn't recommend the reel for big fish fishing. though. Fixed spools rule there because the 506 does lack their cranking power.

However, big fish are going to be encountered when fishing for smaller species. Over a few captures the use of the drag becomes second nature and requires no thought whatsoever. It's smooth enough and reliable too, though many who own these reels take the precaution of removing the anti reverse pawl and going over to backwinding instead. Like I said, ABU owners are always tinkering with their reels and making modifications to them...!

If there's one modification I would make I reckon it might be to knock up a slightly longer handle because the one it has seems a tad too short by comparison with other reels. That would be easy enough because a new handle is a simple thing that could be made easily with a hacksaw, file and drill. It would improve the feel of control when fighting fish I think, but of course would reduce the retrieve rate even further.

It's USP is its seamless one-handed operation and trotting its forte, though it was never designed for that purpose. Cast and allow the line to spill off the spool as the float demands and then strike the bite when it comes by trapping the line against the spool with the middle finger, then wind one turn forward when the pick up pin pops up and engages.

For this purpose it's best to have just enough line on the spool for the job because banking a chub will tend to bed the line into an overfilled one making subsequent trots jerky. This clears after one long trot of course when the line is relaid, but is a pain. 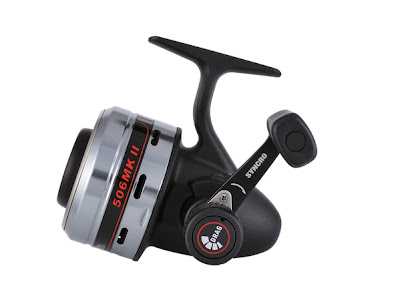 I also think it peerless for stillwater waggler fishing when making lots of repetitive casts after fast bites where I've become so accustomed to its smooth operation in fact that when I go back to a fixed spool I'm all fingers and thumbs again. Apart from the old Mitchell match with its one touch bail arm, no other modern reel can match it for sheer fluidity in use, which is odd.

You'd have thought a manufacturer such as Shimano would have thought of this need for speed in certain types of angling and supplied something appropriate to the demand, but they haven't bothered to — I suppose the ABU renders the exercise pointless because it can't be beat. However, as Mark Wintle says, there's still plenty of room for improvement...

Luckily there's an entire stable of ABU closed face reels to choose from and there's a modern version of the venerable 506 available for £70 — the 506 MKII. That's an immense achievement for ABU I think. Only two versions of the same reel in a third of a century of manufacture! Name any other marque that can boast that they got it so right the first time that there was hardly any need to improve upon it a second...

That's ABU all over. Their 6000 series multipliers which I own two of, one from this century, one from the last, are pretty much the same reel, one with old fashioned and the other modern styling but both having interchangeable parts that still fit each other because the engineering beneath the veneer of style was right first time. With ABU, modern cosmetic overhauls designed to bring in a new and loyal customer base amount to so much gilding of the lily. Beneath is a machine originally built to last a century — not just in reliable mechanical operation — but also in utility.

As it says on the original advert from way back when ~