Build It and They Will Come — Supersoft (Pt3)

Perhaps the most amazing thing about the Sowe and its run-down, threadbare life over the last century or so is the fact that it was once horribly polluted by all accounts and for many decades, but it isn't now and hasn't been for some considerable time — and yet, its cleanliness has not been nearly enough to restore it to good health.


These are the ratings given for the river by the Environment Agency, or at least they were ~

They've gone all European Water Framework Directive and removed the old General Quality Assessment stats from their website. Apparently the measurements they were using, presumably arrived at in inches, miles, pounds and ounces, pints, gallons and fahrenheit, weren't nearly good enough and now they'll need to get in line with the rest of the continent and measure river quality in something more metrically acceptable and with 30 rankings, at dizzyingly labyrinthine levels of detail...

However, the new measurements do include one crucial class missing in the old-fashioned but intelligible 'O' level exam result style of the original data set, and that I do applaud because rating a river on water purity, pollution levels and food supply alone does not tell us that it supports a healthy head of fish, only that it can or can't, so the directive includes ratings for 'hydro-morphological conditions' or in plain English, watercourse structure, because if everything else is right but the structure is bad then the excellent other ratings are rendered worthless.

Something good out of Europe? Well perhaps, and we'll see...

This set of data will be enough to reduce the Sowe's status along much of its length from approaching chalk stream level to down in the sewer in one fell swoop because it recognises structure as what matters most to fish when it comes to making use of clean water and its abundant food supplies. In short, if it isn't a fit house to live in, it doesn't matter a jot how full the larder is.

And this was never more apparent than where I've been mucking about because the new pool has excellent river structure that fish have pounced on as fit accommodation whilst that just a few hundred yards downstream remains the same poorhouse it ever was and they ignore.

The worst part is where the incline of the deep cutting through which the river flows bottoms out and there's a stretch that's dead straight, uniformly wide and far too shallow for at least a quarter of a mile. The problem with this horrible length is that floods no matter how powerful cannot change it because it is so heavily armoured — the gravel bed having such a smooth and even profile bank to bank that current forces cannot penetrate and lift it — spate waters gliding straight over as a massive smooth sheet.

Because there's no deviation there or anything that can deflect water, create turbulence, and have that gravel lifted and shifted, after the recent floods you'd swear they'd never happened because they had absolutely no effect whatsoever. It's just as dull and dead now as before. I don't know what can be done with it bar damming it with a weir to lift levels high enough above to create suitable conditions for silt sievers such as bream.

However, because of its shallow incline it does offer the best opportunity for successful re-meandering work. If the channel were narrowed by half that would mean twice the depth of water in the channel but the same quantity flowing at the same speed through it. Make the channel sinuous though, and everything changes because the length of the river channel is thereby increased which has the effect of taking the same quantity through the same linear length of cutting more slowly but in a hydraulic sense, more powerfully.

This kind of work was attempted in the past. Unfortunately it was a failure because it wasn't extensive enough nor was it sensitively done, but more importantly, was abandoned to its own devices and never followed up on once the funding moneys ran out...

A Brief History
As it passes into the local park the river nowadays enters an ornamental landscaped section backed up behind a weir designed to create a slow flowing broad channel of relatively deep water bordered by a continuous parade of mature weeping willow. Below the weir and for some distance our river then assumes what might be mistaken for it's natural course and channel but terminating in the most unnatural feature possible for a lowland stream. 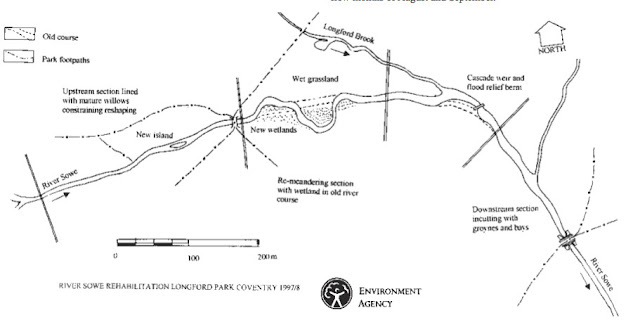 This is the cascade weir built of blocks of red sandstone all of which were once part of probably Medieval stone buildings and walls destroyed in the Blitz on Coventry City. It looks quite good actually, kids love it as a playground and it certainly oxygenates the water below, but it shouldn't have to be there at all.

The reason it exists there now is because of a special problem that it was part of an attempt at tackling...

In 1943 during the Dig For Victory war effort the river was straightened over many miles to drain the surrounding meadowland and make it fit for arable agriculture. This involved digging a new channel cut straight through all those troublesome ancient and tortuous meanders, designed to get the water through and out the other end as quickly as humanly possible.

When in the late twentieth century it was decided that the river required natural appearances for its new purpose as a parkland feature, an attempt was made to create something like its old course and have it flow through that instead. The trouble with this was the wartime engineered straight course had reduced the effective length of the original river channel by half.

Just as a road descends a hill by a series of hairpin bends, the original course took its time about getting down the gradient, but this channel simply took the most direct route from top to bottom which was straight downhill, and at breakneck speed. 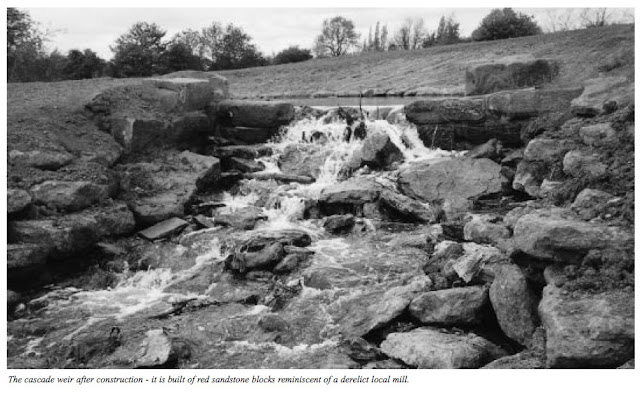 The answer was the cascade weir. This allowed the river upstream of it to be mechanically re-meandered in a natural looking narrow channel that is just the right width for the volume of water it carries and even a small wetland area was created that floods as it should at times of high water. The work was very successful there, however... 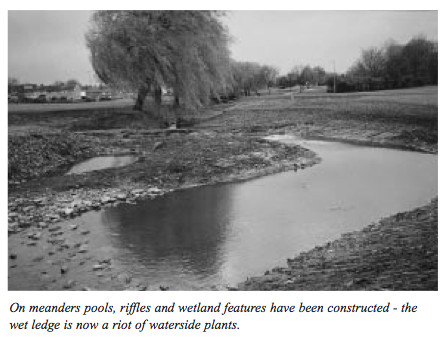 The cutting below the cascade weir was so steep-sided, deep and obdurate, that little could be done with it and so bays were cut in the banks and groynes placed above them in the hope that the river would re-meander itself under the power of spates to whatever degree it could. 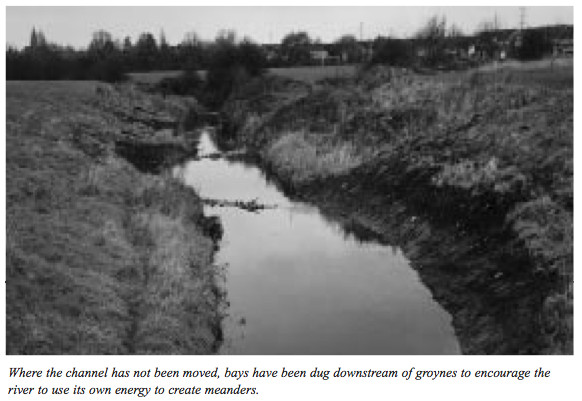 Hardly any trace remains of that effort today, the river having annihilated the ill-placed groynes, silted the bays and resumed its straight course, as of course it would because there's nowhere but straight through for high volumes of water to go in such a deep and direct cutting. It returned to being nothing but an open pipeline.

Back to the future
The pictures above were taken from the footbridge and show the river flowing towards us, the new pool way up in the trees at top, but the obdurate stretch I talked about earlier is immediately downstream of here.

Water is a strange substance. It is heavy but it is soft. It has no power to transform or do much except crush things under its own weight or dissolve what it touches or contains till it starts to move or something moves into it when it's the greatest and most powerful force on earth. It's no wonder that water in one form or another is always at the root of the notion of the sublime... and a sea in storm the most terrifying thing imaginable.

Put it this way. Make a perfect dive from a high cliff into the sea and you'll enter with barely a splash and feel no great force hit you as you do, but belly flop and your gut will split open from navel to chest. A gallon of water weighs 8lbs and more and if I dump it over your head it won't hurt even a bit, but the same gallon shot out of a water cannon at high velocity will send you down the street like a spinning top.

In rivers, this power is what changes things, weight and velocity combined hitting stuff and moving it about but then softly dissipating back into the main flow where once again, it regains the power of velocity and weight combined. It's unbelievably more complex than that though, which is why when the forces are simplified by straightening channels only then do they become easily understandable, quantifiable and predictable. Hence all the efforts to straighten so very many of our streams over the past century — because it tames the heart of the wild beast in them.

Below the footbridge they removed the heart itself and because there's nothing to hit, the water simply passes by without effect and though in times of flood it will sweep you off to sea should you fall in, it's powerless to transform anything there because there's nothing so heavy or well fixed that it hasn't been swept away and what remains that can resist its force is too smooth and too resiliant — the solid and immovable gravel bed.

That is why it is dead and will remain so till something is done to improve its 'hydro-morphological' conditions...

But how on earth would I achieve such a thing alone, without a JCB, and with only sticks and stones and the power of water to play with?

Well, I've been having a go at understanding the hellishly complex but subtly effective field of 'supersoft' river rehabilitation by going about things the only way I know how and that's to get stuck in (and very wet!) by messing with about with things found about the river just to see what happens when I place the stuff in it.

So next time I'll entertain you with my recent discoveries and further experiments but in the light of the success of the creation of the pool, also their abject failures...