Respect is Due 2 — Heron on the Sowe

Some time ago now I published a graffitti piece of a zander that suddenly appeared upon one of the M6 motorway support columns where it crosses the Coventry Canal. I don't know about you but graffitti is okay in my book only when it captures the imagination, finding the majority little more than a splash of meaningless colour brightening those drab and neglected corners of the world where the sub-culture that creates them likes to hang out.

I don't appreciate the majority of those pieces because I'm not part of their culture and don't understand the underlying thought processes that lead to someone breaking the law, or even risking life and limb, to create something with such a strictly limited audience and appeal but using such advanced technical skills. I can see they take a great deal of effort to make and require a dab hand to be any good, but who cares how dangerously they were achieved if they don't speak to us?

But then along came Banksy and the stencil revolution. Then we had arresting images cleverly placed carrying ironic/sardonic messages that actually did catch everyone's imagination, not least those of canny art dealers who saw the market early, cut them from their proper context and transported them to their galleries...

I thought that the zander was really something because it suggested that whoever created it actually knew something about the fish population of the canal. Well, it took some time before anything else remotely pertinent to its context and therefore appealing to the eye turned up, but then this piece appeared on the side wall of the weir on the River Sowe in Longford Park one morning last week ~ 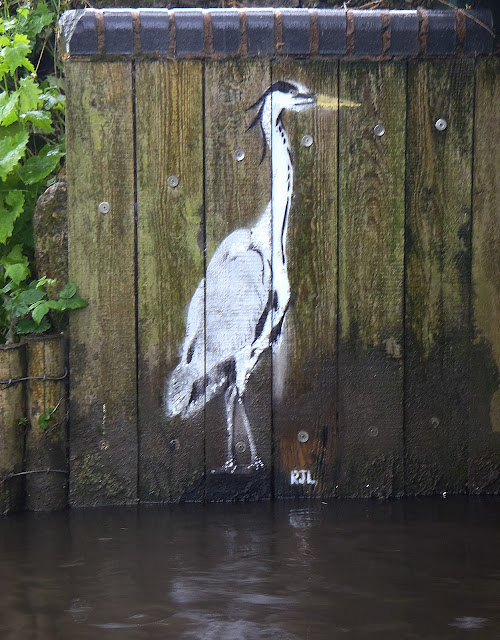 Clever I think, and if it weren't for the fact that herons actually do visit this river would be ironic...

...but I wonder how difficult it would be to prise those planks off the wall..?

...and if RJL the artist responsible was fully aware that someone might want to take irony a stage further, take them away and stick them back up on theirs...?