An angler who fishes but catches nought - has he failed to cast to biting fish or succeeded in casting to fish not biting?

Such philosophical conundrums as arise on the bank side from time to time and to even the least reflexive of anglers, are never the product of idle thought but grow from the root of peculiar practical experiences, like yesterday's...

Let me explain. I went fishing up the canal to crack that hard to acquire silver bream fishing challenge point of mine and took along two rods, one a float rod and one a ledger rod. I cast both to likely looking spots in the same swim but had all the bites and all the fish on the ledger rod, the float rod remaining quite inactive the whole time.

This would be a mere quirk of statistics were the statistics were not so very remarkable - ten bites came and seven fish fell to the ledger rod and none whatsoever to the float, despite the fact that the two rods used the same white maggots as bait and were swapped in position, left for right, twice...!

Had I gone fishing with only the float rod to rely upon would I have drawn a blank and put that blank down to the torpitude of the fish? Had I gone with two ledger rods, would I have then enjoyed twice as many fish as I did and perhaps scored that elusive point?

You see I did catch yet another silver bream, but just the one... 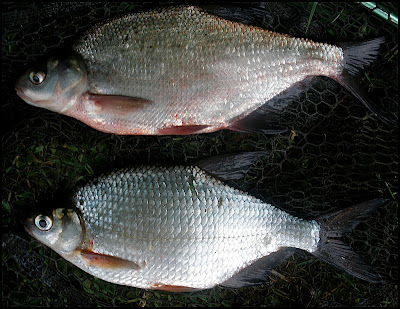 A 'skimmer' and a silver bream, the distinction is clear!

Now, given that one ledger rod can outscore one float rod ten to none, I cannot see why it would not then be feasible, if not possible, indeed likely and even certain, that a second ledger rod would outscore the first ledger rod for one species in the same order of magnitude, with ten silver bream falling to it and it alone.

Of course next time out I will take two ledger rods only to find that I should have taken two float rods instead...

Test of Strength
What was also remarkable about the session was that I caught a female tench. No statistical marvels here; remarkable only because canal tench are an infrequent catch round here and it's just a lovely fish too. 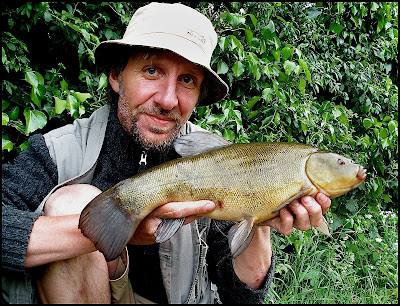 Early in the session I had seen a cloud of yellowish silt rise along the far bank and thought it to be the work of either a tench or one of the carp that have been showing in this spot lately prior to spawning activities. I was taking a leak when the bite came, the rod bucking in its rest as the fish took off along the far shelf with the bait and the running lead in tow. I eventually got myself tucked back in and lifted into what I thought would be another of the perch I'd been catching or even an additional silver bream, only to find myself attached to something altogether more deliberate and powerful.

The Shakespeare wand coped very well with this its first real test of strength since purchase two months ago, the butt having just enough poke to subdue the fight against a lightly set clutch and with never the fear of the 2.5 pound bottom parting company with the hook. How it would have coped with a male tench is not certain - I think such a fish might just be too much for it, to be frank.

Also, as I have decided to begin over with most of my personal records due to the memory of those caught so many years ago being so unreliable, the fish at 3lb 6oz is a new personal best for tench...!

Unfortunately, this very interesting short session turned sour at the end when I spied this creature floating dead in the water ~ 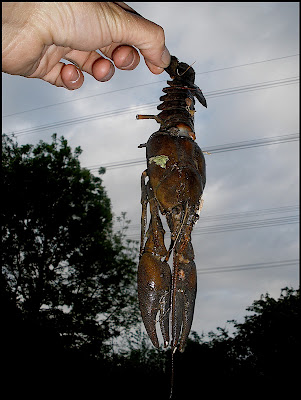 I have never, ever encountered a signal crayfish on the local cut. This is the very first, and I sincerely hope, the very last.
Created by Jeff Hatt at Wednesday, May 26, 2010