A crash in temperatures occurred last Friday and the bream of the canal who'd been fooled into starting their annual love-in early and were just beginning to deposit and fertilize spawn, had their nuptuals brought to a premature halt as ten degrees of daytime temperature were wiped off the thermometer virtually overnight and water cooled sharply from the optimum 14 degrees celcius that triggers spawning in the species.

Over the previous few week I had seen the signs of their growing excitement in the form of far bank movements and later some occasional splashing right under the brambles that line the bank in one of their traditional spawning spots about half a mile walk from home. On the Thursday prior to the turn of the weather as I walked to the local free fishing lakes that have been my venue of choice recently, they were still at it and getting quite frisky.

I didn't stop off to fish even though some great fishing can be had if the timing is right, the noisy activity tending to attract all kinds of cyprinid species who are not ready to spawn for some time yet but seem to be there as spectators. The pervs...

I decided to fish 'Mint Mere', the highly attractive but quite difficult reed lined lake with a head of good sized carp and tench. On arrival I found a frog taking advantage of the heavy morning rain, out and about in the damp grass hunting slugs ~ 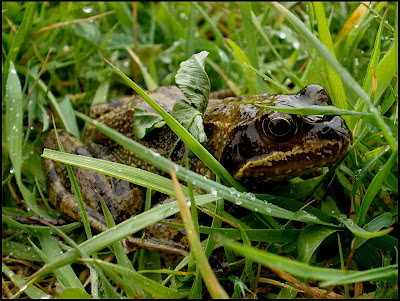 The rain was just beginning to enter the lake at the inlet in the corner where I like to fish, and was colouring the water brown. As the stain encroached upon the lake the water surface began to erupt with startled fry corralled and chased by a gang of unseen predators, probably perch. I tried maggots after one of the unseen aggressors but all I got was a troubled float as the tiny fish passed close by.

I skimmed the landing net through the water and caught one of the fry, a yearling roach. I could have mounted it as a livebait and certainly caught one of the perch, but I find that nowadays I just cannot bring myself to practice that peculiar art.

Peas in a Pod
I moved over to the adjoining lake, one full of drifting beds of amphibious bistort and decided to fish for whatever I could find there. The slowly falling bread flake got its first customer within just a few minutes in the form of a small but perfectly formed common carp who ten minutes later was joined by its twin, both of whom gave the new wand its severest test thus far, and I must say that it coped admirably.

A double figure fish would of course be a very different matter...!

I put them in the keepnet and prepared myself for a shot at landing another forty and getting a fishing challenge point! Of course it wasn't to be, but I did catch the triplet and then the quad over the next hour or so. 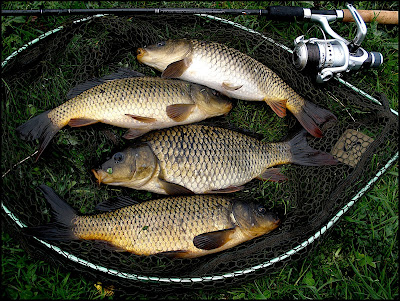 On the way home along the canal I decided to stop off for the half an hour that I still had at my disposal and have a crack at the bream. The first cast was made well to the left of the spawning movements (there's no point fishing there, the hungry spectators are well off to the sides) which brought a sail away bite on bread and a three pound two ounce slab to the net, followed by three more bream on successive casts all around the two pound mark ~ 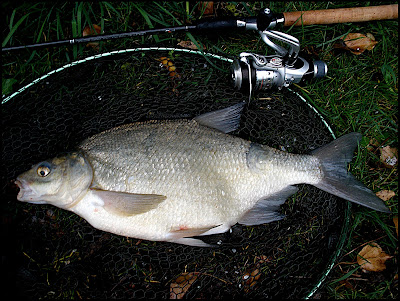 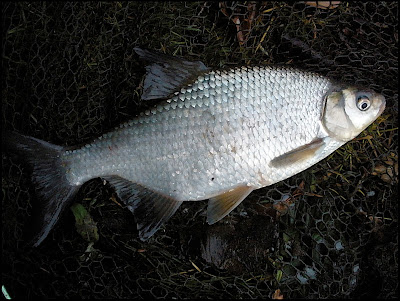 And then the best fish of the day, and one of the canal's truly beautiful rarities - a personal best and fully genuine silver bream of eleven ounces ~ 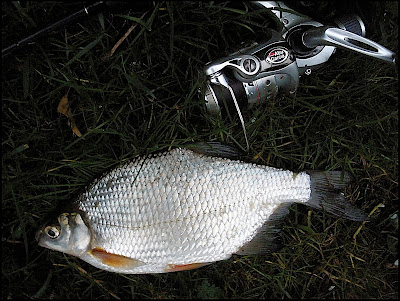 Six decent fish and a new personal best in half an hour or so on this canal is something to shout about! It was a shame that I had to go - I could easily have put together enough bream for a challenge point and possibly would have got another couple or three of silver bream, which would have been very special for that species will certainly prove to be one of the hardest to achieve of the entire British record list.

I did return for an hour the next morning around eleven even though it was very cold by then, just in case they were still on the go, but another fella was already in the peg and even though the fish were still moving, the spectators had clearly stopped feeding as he'd been there since dawn catching just the one bream and a solitary tench for his time and effort.

I fished for an hour one door up, but it wasn't on. The chance had gone...

And it has not returned all week long.

An Afternoon at Lakeside
I went out with Keith on Tuesday evening to Lakeside Fishery, near Hinkley, a new water for me and one that contains if the blurb on fisheries.co.uk is to be believed, four pound plus crucian carp...! 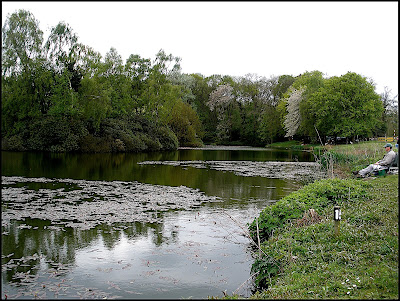 It's an old estate lake with a couple of islands and a few thick beds of lilies, amphibious bistort clumps and like many estate lakes, quite shallow across most of its area and deepest at its dam end. Keith chose a peg that another bloke was just vacating as we arrived taking advantage of his bait and I sat down in the adjacent peg so we could talk and fish. Keith was into fish from the first cast, and hooking up virtually every cast thereafter with roach to 12 oz, and a few bream to nearly four pounds.

I had an early skimmer and then sat around waiting for bites like I'd wait for a country bus. The swim just would not turn on no matter what I did, and I eventually decided after really struggling for just a few roach that I was fishing in the lakes dustbin peg... 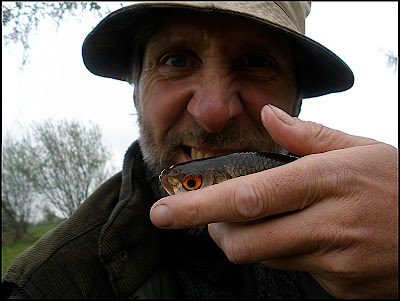 I moved up the lake after walking all the way around its pretty perimeter to find a swim to take my fancy, and settled down in one with a thick bed of lilies 35 yards or so out front. 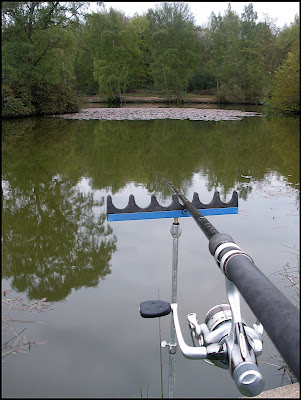 I could just about cast the 4bb waggler to the very edge of the lilies, in fact there was no need to clip up as the edge was actually at the outside limit of my range. Straight away things improved radically with a constant stream of skimmers coming to net interspersed with nice roach to 12 oz. 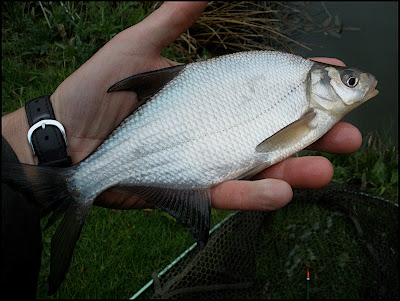 One of the lake's perfectly formed juvenile bream...

Then I hooked something altogether more willful. The fish could be held but I could not gain line as it kited along the front of the lilies. A crucian or perhaps a tench, I thought, but then the hooked pinged out and it was off. Sod it! 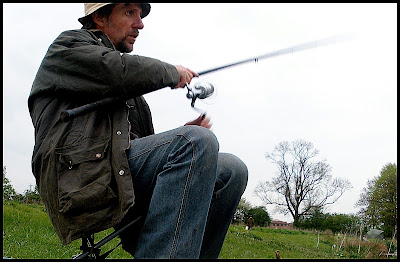 It was so active out front that I even managed a self-timer pic of myself actually striking a bite and hooking a fish, which is no mean feat!

I had no more chances at a major cyprinid that evening but I did get a roach x bream hybrid. I learned later that Keith had hooked and lost three carp that had become interested in his heavy baiting of his swim. He finished with 50 roach and I eventually found twenty or so skimmers so we'd both had a good session.

I also learned from one of the lake's regulars that my lost big fish was probably a wild carp... 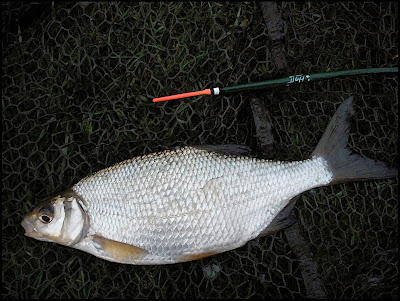 I really liked the place and I think it would make a fine summer fishing haunt; the only problem, and it's a problem that certainly costs this fishery a lot of lost revenue, is the frankly dotty day ticket rules. We bought a straight day ticket that allows you to fish from 6 am till 6 pm. That's just fine in winter, but for summer this rule is absolutely bonkers as it rules out fishing at the most productive times of day unless you purchase a further four hour ticket or a night ticket.

It's a good fishery, pleasant, attractive and clearly well stocked, but at a total cost of £13.50 for an afternoon's fishing it's just too expensive for me, four pound crucians and wild carp notwithstanding, especially when I can buy a local club book for just four pounds more...!
Created by Jeff Hatt at Thursday, May 06, 2010