A little while back I was dragged to the local Tesco's for one of our regular 'big shops' and as usual I peeled off formation as soon as I got through the door and dive bombed the magazine racks for a copy of an angling paper to destroy over a cool beer in a very hot bath later the same evening.

Imagine my surprise when it was he who recognised me...

He introduced himself as "Phil," said he did enjoy reading the local blogs, announced that he knew Keith Jobling well, we then had a brief chat about some fishy stuff, and then we went our separate ways.

I thought no more of it until I found Judy some seconds later and told her that I was now officially a fully made up angling celebrity - she, who then thought fit to ridicule my newly fangled notoriety in squalls of aisle filling guffaw.........

...When I next saw Keith, Keith reported that Phil, or Phil Smith as the angling fraternity know him, had told Keith of our chance meeting and so Keith then filled me in about Phil's rather large reputation in the specimen angling world.

More famous then, than even me...!

This morning I turned on the goggle box and sat back to watch a fishing programme over a cup of pre-work tea. The prog on was Dean Macey's 'On Coarse' and who should be standing behind our Cockney Wonder than the self-same-snow-bearded one, only this time in a pair of fetching blue flannel jogger bottoms that had seen, how shall we say? their heyday...

"Good man" I exclaimed, "now that's how to dress for the bank!! Like an overgrown street urchin!!!

Then the urchin resemblance hit me square between the eyes and I knew exactly where I'd met Phil before. Up on the shelf above the telly is one of my favourite recent reads, a simple black bound volume embossed 'TOP TEN" in gold letters that was found in a shop in Skipton, a compendium of articles by the top ten leading specimen hunters of their day, and their day being 1983.

The list reads like a who's who of British big fish angling of the time, with names such as Kevin Maddocks, Tony Miles, John Watson and John Wilson lending weight and gravity to it. And it is great!

I grabbed the book from its shelf and flicked through until I came to the page that contained the urchin image...

...and there he was, posing with a brace of skimmers! 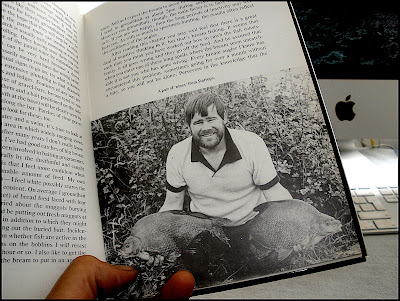 The same Phil Smith of the magazine rack, but at about half his present age!!!
Created by Jeff Hatt at Saturday, May 08, 2010