With a whole day ahead of us and visiting yet another new water so far as I was concerned, we arrived at Long Itchington raring to go and pulled in the car park of Stockton Reservoir at eight thirty AM only to find it almost full to capacity...

My immediate concern that every other peg would be taken was quickly dispelled by Keith quickly spotting the problem as spelled out on the notice-board at the lake entrance announcing a pensioners match in progress, pegs 1-20.

"Oh, that's good" said Keith, "all the fish will flee the match area and head to our pegs at the windward end..."

"Windward end...?" I inwardly wince, having forgotten to pack a coat...! 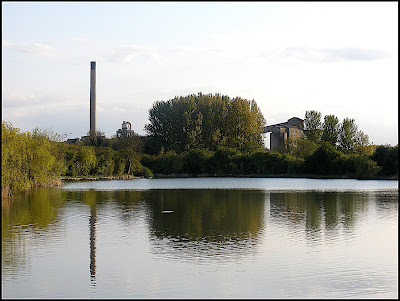 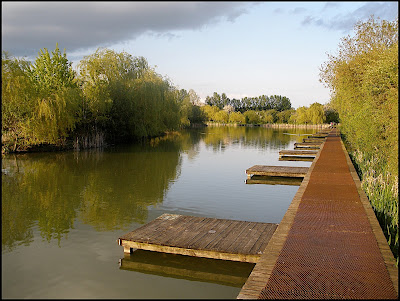 This fabulous wooden walkway runs along the entire length of the eastern bank... 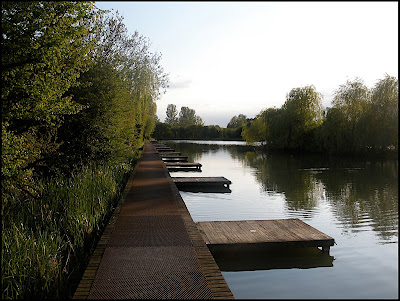 It must have cost British Waterways a fortune to build

Our target species for the day are to be king carp and crucian carp, and both of us attempting to gain a point on the challenge score board for either/or, or even both if at all possible. I elect to float fish a large halibut pellet for carp up against some reeds in the far, far corner of the lake that we had chosen as most likely, and float fish maggots on light gear out front for the crucians. Keith chooses to float fish out front for the crucians too, but for the carp he decides to chuck a heavily loaded method feeder against the far bank cover with tiger nuts on the hair rig. 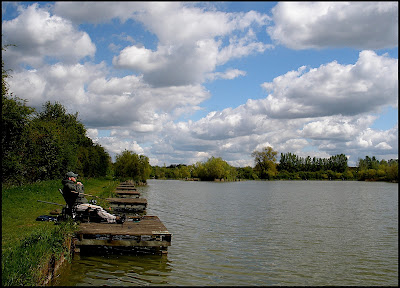 Keith on one of the very generous stagings

The first fish of the day are small maggot caught roach and rudd and then, and it wasn't long into the session, Keith opens his king carp account... 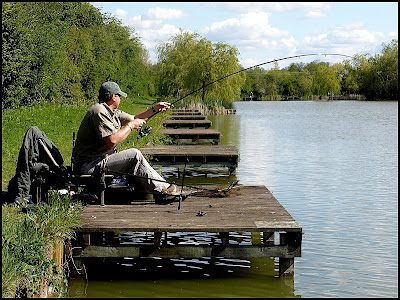 ...with a fish so freakish looking that I think it earns the moniker, 'Ugly Betty'. 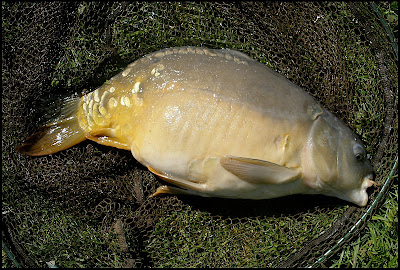 From the outset I get a constant stream of roach and rudd to about half a pound on the maggot, and so does Keith, but I'm witnessing somewhat larger fish porpoising over my feed area and Keith fishing in the next peg along, is not experiencing this. They can't be roach unless they are very big roach, and they're not carp unless they are very small carp — they could be large rudd or even crucian carp but no matter what I try, they do not seem to be feeding and the smaller fish continue to come one after the other. 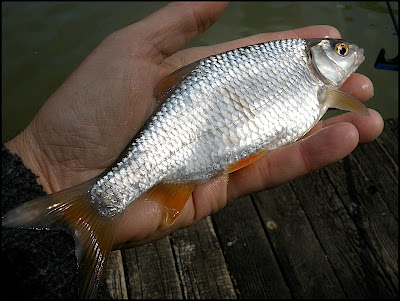 A female roach with a belly full of spawn

I bait an area close to the near margins with small expander pellets and put one on the hook. I cast close to the reeds and within a few minutes the float toodles off, the strike meeting with a strong but ultimately controllable fish that tears around for a while, and then pings off. I think I am on to something, of course, but unfortunately this proves to be the last bite to the small pellets.

I am concentrating hard upon the porpoising fish, who's activities are increasing as the sun rises and warms the water, trying to ID the fish species responsible and just when I finally glimpse what I'm convinced is a very crucian carp-like dorsal fin, the carp float suddenly slides sideways and disappears in the corner of my eye. I strike late but find myself attached to a powerhouse of a carp that after quite a scrap turns out to be a mere five pounder... 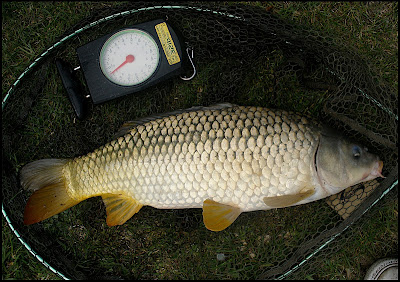 The weather is blowing hot and cold and so are the fish, who seem go off the feed only to come back on whenever the sun comes out again, indeed the sun, when it does appear, is blissfully warm and the water falls dead calm during its out spells, but whenever the cloud covers its rays, the wind picks up and chills us to the bone. I put my brolly up to get out of it and then I'm comfortable.

Then, after an hour or more of inactivity, Keith suddenly gets another carp on and as he lands it, my pellet float is off again and I'm also attached to carp number two who gives me a good old run around and then is duly netted. A nice looking mirror carp this time, of just under nine pounds... 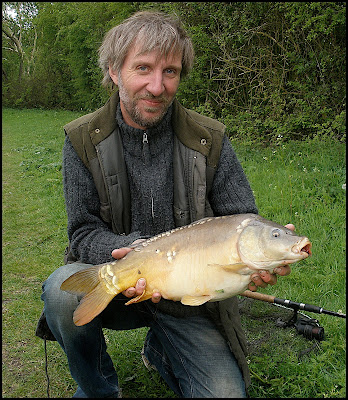 The mystery fish are still rolling in my swim every now and then but maggots, corn, bread and macaroni have failed to tempt them so far. I decide that a change of approach is required and soak a batch of liquidised bread that I have over from a previous session — a third of this is balled into the swim exploding in a milky white cloud of slowly falling particles and the rest kept back just in case it has the desired effect.

The first effect is that the roach and rudd return in force and every chuck is now producing a bite. I even get a few perch on the triple white maggot. Then I notice bubbles rising over the feed area and the bites suddenly cease — then a small dip of the float is struck and I find myself connected with an altogether different fish that tugs away doggedly like a terrier with a rope between its teeth but finally tires and reveals its golden flanks as it slides over the net. 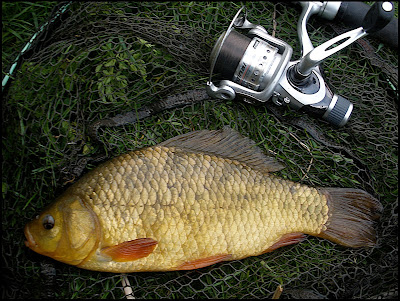 I just knew they were crucians! The fish weighs a pound, five ounces and eight drams, so I'll use my hard won artistic license to round it up to the full six and have done with it, ta very much. It is actually the first crucian I have caught in almost thirty years and because I never weighed fish back then and those that I did catch were probably not this size, a new personal best...!

Of course I am now fully focussed on the job of catching crucians and retire the carp rod. Keith meanwhile is catching carp regularly and getting increasing attention on the method feeder with line bites and knocks occurring almost continuously. 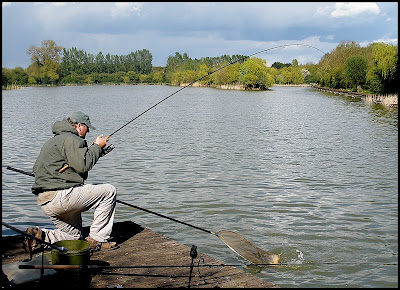 He is on fish four when he lands this specimen which proves to be his biggest of the day at eleven pounds, I seem to remember. 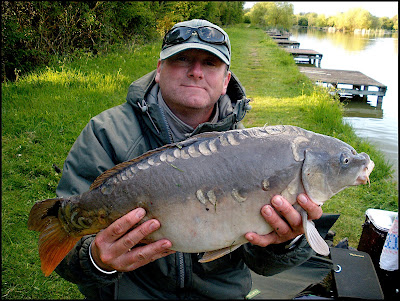 As the afternoon cools and evening arrives we both then realise that we're chasing rainbows — neither is going to achieve their targets unless a miracle happens. I do have another smaller crucian half an hour after the first but the chance of more passes away when I hook and lose two carp on the light float gear, and Keith despite having a steady procession of single figure carp coming to net all afternoon, is going to need a twenty pound plus fish to secure his point.

I tackle up the carp rod with a method feeder and have a chub from the far bank. It feels odd catching chub in lakes... 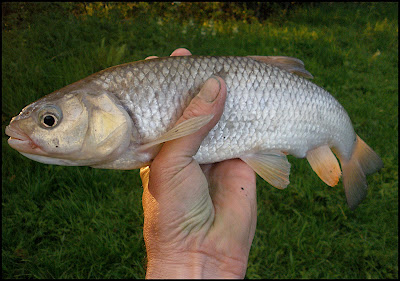 While there's still light enough for pictures I release the crucians... 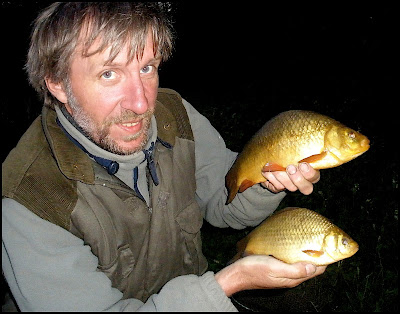 Keith meanwhile is still catching carp and does so till the last! 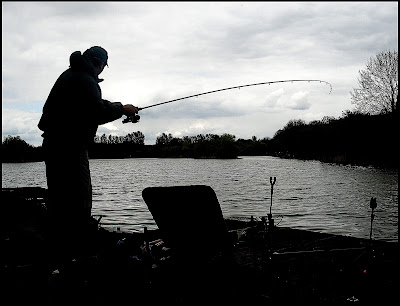