The stream that provided me with such wonderful winter roach sport in the frigid first months of the year has since been subject to my further scrutiny, but much closer to home. The very same stream runs through my local park a couple of miles above the roach stretch, and above that through what is locally (and hilariously) called the 'nature reserve', and then she disappears upstream under the Coventry Canal. 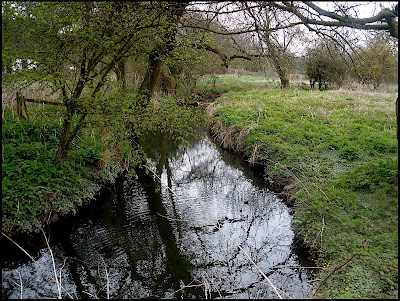 So we (that's Molly and me) finally plucked up the courage necessary to venture to break the cherished routine of the morning walk along the cut, and we struck out through unknown suburban territory and into the wilds above the canal in order to relocate the 'disappeared' watercourse, and what we found there was a genuine surprise — the first 'meadow' above the canal tunnel contained a stream that looked quite capable of supporting a population of fish — an ancient and meandering floodplain connected watercourse abundantly rich in the features to be expected of any natural stream, but also and equally abundant in the unsightly stream bed detritus features you'd expect of an urban stream — offensive to the sensitive eye perhaps, but all genuine habitat, nonetheless.

Unfortunately, there were to be no surprises on the fish front. All I spotted, and all that Molly flushed in her splashy spaniel exploration of every nuance of this novel new place, was a solitary stickleback... 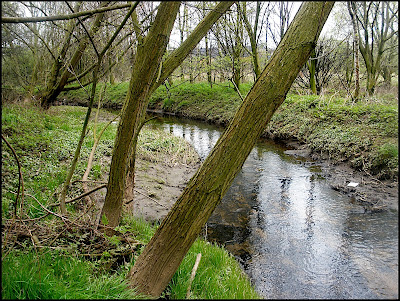 We progressed farther upstream and there encountered a wide, shallow and flashy looking stretch of stream that was good looking enough with willow fringes but still somehow at odds with her surroundings; an altered watercourse on close inspection, with an unnatural looking bed consolidated with harsh plastic mesh. 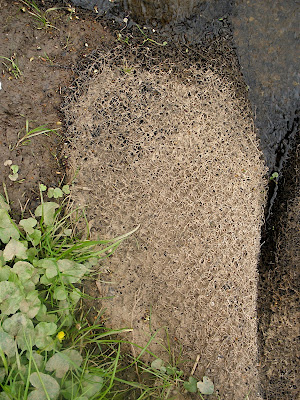 Two consecutive desiccated lengths of disconnected old river bed to our right served evidence of a crime of convenience — re-channelled to pass tamely beneath a new road bridge in recent times. It was also obvious from the paired deep ruts that the site had been driven onto by heavy vehicles and the river had been crossed in places. 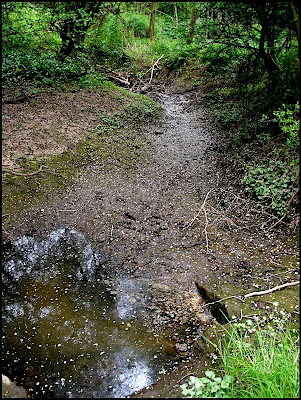 The dried up old course

This reworked stream continued for quite a distance, under another trunk route and then out into what looked just like 'English Countryside,' with even a picturesque church to reinforce the illusion, where, just after finally becoming her natural self once more, she split into two unequal halves with the heavier flow falling from the north as we walked onward and upwards beneath the M6 motorway, and towards her not too distant source, somewhere above Bedworth.

Shockingly. All this way, and though it looked healthy enough, there was not a fish to be seen in it...

A Health Check
Fish should be, wherever fish should be. Obviously this stretch of the stream had suffered an appalling pollution incident at some point in recent history and had never since been able to naturally restock with fish. I decided to test the waters, to see if the stream, which looked clean enough, actually held an ecosystem capable of sustaining fish stocks, or conversely, if it really was barren for good reasons. 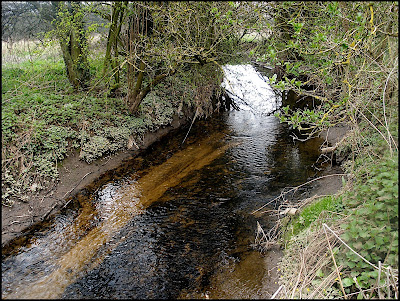 So, on the way back I got into the water and had a rifle around. Things were not that hopeful for a time as I couldn't find any living thing in the clumps of fine green silkweed that had attached themselves to the bed in the altered course section wherever the water increased velocity and became oxygenated around the very few in-stream obstacles that had found their way in since construction. Then at last, up popped a strange and delicate beasty with long legs and articulated body that on research turned out to be a nymph of the damselfly.

This encouraging sign got me started on regular forays to uncover more evidence that would support a clean bill of health for the fishless stream.

The next day out I stopped to talk to an old fella who'd been standing on top of the bridge watching Molly's antics in the water below. He'd lived in Longford village all his life, played in the stream as a boy and had witnessed first hand the destruction of "Polly's Parlour," this once complete and unspoiled habitat, at the hands of road builders, property developers and lately the flytippers and 4x4 drivers who'd felt able to use the now cut off and isolated site as a free dump and playground.

He told me that once upon a time there were "big shoals of stoney loachies swimming around here, each one bigger than your hand". If so, they must have been loach of record busting proportion, so I'm sure he really meant that other fish that does swim in shoals and who's name sounds just like loach...

The stream's fauna started to reveal itself slowly but surely and the more I looked the more I saw. Over the course of a few forays I not only found species enough to prove that the water was clean enough to support roach, who are besides eels the most pollution tolerant fish of all our freshwater species, but also discovered to my surprise that it was actually clean enough to support that finicky fish at the top of the list of pollution intolerant species, the wild brown trout ~ 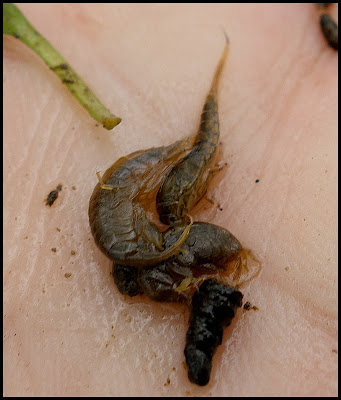 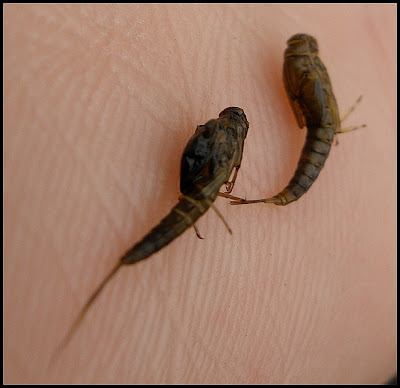 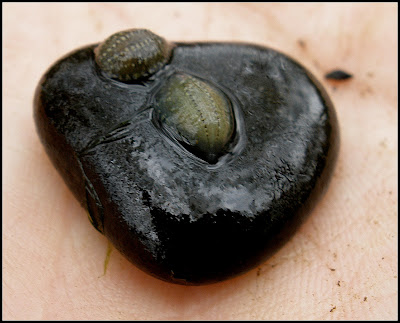 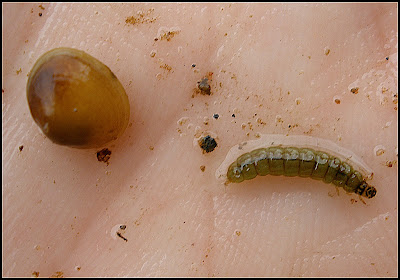 A lobworm from beneath the gravel

And then, after discovering enough to convince me that fish could indeed live here, I finally found one ~ A bullhead or millers thumb

So, having established that the stream is more than capable of supporting the fish that I think it richly deserves to have, where do I go from here?

I cannot simply stock it with fish and fall foul of the law. I can, however, move fish to it from stock already existing downstream by exploiting a loophole in the law. Under the current rules governing fisheries and fish movements it is legal for an angler to transport fish for use as livebait from one part of a watercourse to another, just so long as the angler walks the fish there...

I could of course attempt to go through the correct channels and even work towards having the stream stocked with wild brown trout as well as my beloved roach, which might entail undertaking years of work with no guarantee of a satisfactory outcome. Indeed there are plenty of existing structures already in place for the implementation of such hair brained schemes, as I have since discovered.

The Wild Trout Trust and its 'Trout in the Town' initiative sounds interesting...
Created by Jeff Hatt at Monday, May 03, 2010