Coming Apart at the Seams

I had just three hours from 2pm onwards in which to build a swim at Lucy's Mill that would provide enough fat bream for a challenge point. I needed nineteen pounds and ten ounces of them; a seemingly impossible target in such a short time scale especially as it would probably take an hour or so to get the first results...

Crossing over the footbridge below the pool I spied a couple of anglers sharing a swim near to where I really wanted to be, and to my horror I could see, even at distance, that they were both fishing a pair of rods on pods for barbel or carp. If they were taking up too much water, and four rods can command an awful lot of space, then I was buggered before I started.

I wanted to cast my rods across to an area, half to three quarters of the way across the river towards the wall of the mill (now flats) where Keith had suggested I should fish. He'd also suggested packing the feeders with fishmeal but due to a hiccup en-route we bypassed Lanes of Coventry and as they were going shopping there was no way on earth the girls were going to turn around for 'fish-food'. I had maggots, casters, breadcrumb and flake. It would have to do.

I went and had a chat with the big guns, just to see where their lines were heading. Thankfully they were pointing downstream to their back leads and the most upstream of all their four rods was cast miles away from my intended destination, so I was in the clear. I told them I was bream fishing — they were highly amused, eyebrows raised, dropped jaws.

"Bream fishing!" They exclaimed, in unison. 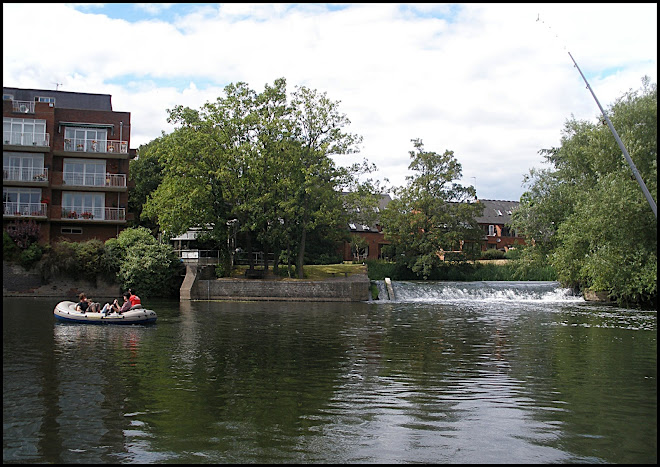 I set up two rods (for bream!) baited with a red maggot and bread flake cocktail designed to put the perch right off the bait and fired out feeders full of breadcrumb, crushed casters and maggots every few minutes in rotation for the next hour. On the hour I had my first bite and connected to a bream of three pounds.

Then the fella and his non-angling mate, who'd been bream fishing yesterday (and catching mostly perch) turned up and found that he could not fish below the big guns as they ware taking all the water downstream of the bream hotspot he wanted to get to. So, guess what? He got between me and them and set up there, forcing me to fish straight out on my downstream rod and upstream on the other which would mean that I would now only get the one rod over my carefully and laboriously laid feed, which was certain to move slowly downstream for the rest of the session and into his peg, taking my bream with it ... 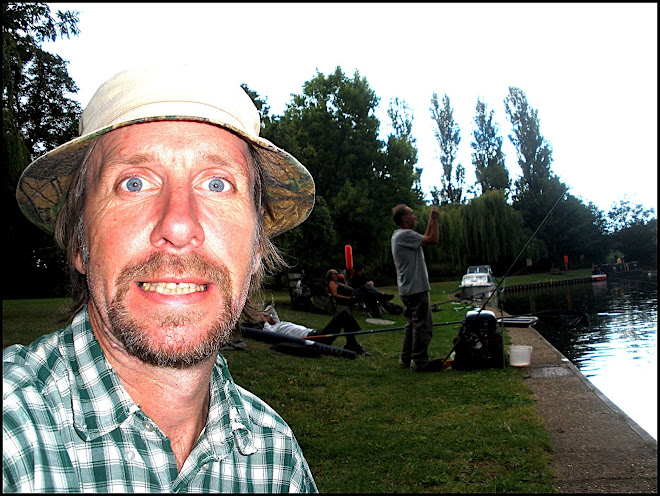 As he was setting up stall I had a short window in which to fish hard over the feed and amazingly, because he had to rig his rod up completely from scratch, and smoked fag after fag whilst doing it, I got a full twenty minutes, in which time I hooked and landed another brace of bream at three and then four pounds apiece.

It was all going surprisingly well, so far...

Ten pounds in the bag, and an hour and a half to go.

Then he made his first cast and not surprisingly, my bites halved as I attempted to tempt the bream further upstream. I never got another bream bite on the upstream rod and so I cast it into the faster water off the tail of the weir-pool fishing two grains of corn for hopefully, a barbel.

I got a half pound roach.

He soon had his first bream off the back of my effort but I was gratified to see him wasting most of his time thereafter catching perch on his unprotected maggots.

Then another angler turned up and set up above me. Five anglers and an anglers mate crammed in the space of two and a half pegs, was just preposterous. 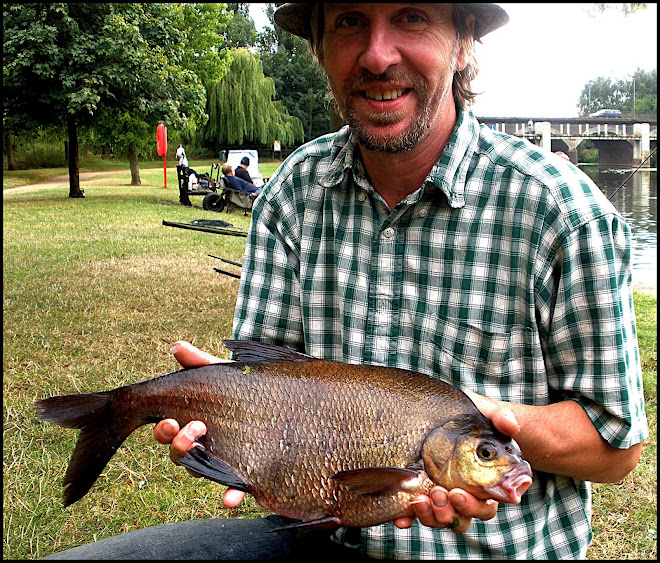 But I did get another bream of four and half pounds and later hooked into a really heavy fish just as I began to retrieve both rods as a boat approached. I didn't see a bite, it must have only just picked up the bait!

I chucked the upstream rod in the water with the reel jammed behind the keep net so that the tip would take the line to the feeder well below the boats keel and then shouted for the boater to back up whilst I played the fish out. Now I know it is possible to play a fish with the tip submerged five feet under water, but it's not exactly ideal, is it? Amazingly, the boater was a fine fella who recognised what was going on and went into full throttle reverse.

Unfortunately, just as he stopped the boat moving, the hook pinged out and the fish was offski.

A shame that, it was coming in like a sack of spuds and could well have been the fish to take my fourteen and a half pounds thus far, well over the bar, to twenty or more. Ah, well.

When Judy and Zena turned up shortly after and had no picnic in the basket to occupy them I knew my minutes were numbered. Zena is a teenage girl and when shopping is done and dusted, thinks only of getting home and trying on her buys. I tried to get a few precious minutes more by giving her the useless upstream rod to play with but to no avail... 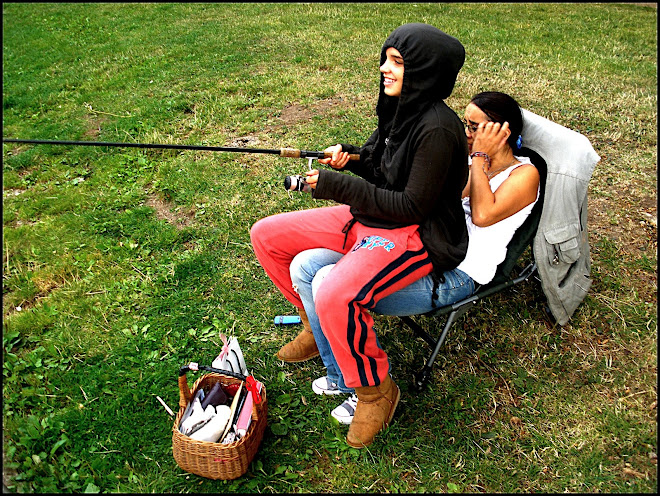