The holiday break at Anchor Meadow may not have been particularly successful in terms of sheer quantities of challenge points gained, in fact it was an unmitigated disaster to be frank, with nuls points gained whatsoever out of the many feasible and possible points on offer, but it was the greatest fun in the trying, and that is what really matters with fishing, surely?

Well no, let's be even franker than frank here and admit that fishing is actually all about winning something, even if that something is a mere confection invented as an excuse for getting nothing...

This is precisely why anglers have been so very resourceful down the years in the creation of various bets and sidebets, with others and themselves, have more or less led the world in long, tall and wide stories for centuries, are expert liers who convince even themselves of the validity of their outrageous claims and who have given civilisation the most perfect excuse of all time in the 'one that got away' story, probably the greatest get-out clause for failure ever invented in any sport. They say that every angler becomes a philosopher, in time. With such a well stocked box of obfuscation tools at his disposal, is it any wonder?

Along the same lines, a comment from a fellow failure down at Anchor Meadow on the last morning tripped my synapses. He mentioned that he'd hooked into and lost an unstoppable steam train of a fish in the very same swim where I had been when I'd had the same experience. I always have thought that the strictly contained short stretch of water between the two weirs holds a truly shocking barbel. Of course, us both being anglers and therefore without a ceiling to our imaginative capacities, this merely confirmed what our respective 'one that got away' stories suggested - that we'd both lost the same record breaking fish... 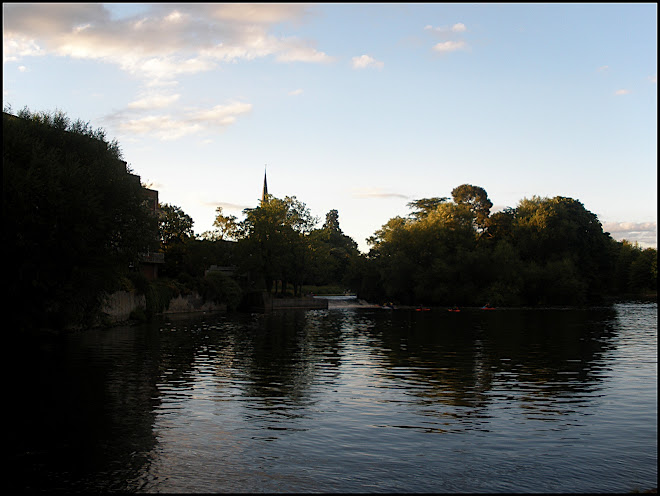 An A - Z of Bleak fishing
a. Judy has business in Stratford.
b. I can snatch a few short hours fishing the town waters
c. Research confirms the presence of bleak
d. I have maggots
e. I can fish on a day ticket
f. I have money enough
g. I have the energy...
h. ...and the determination to succeed
i. the stretch below Lucy's Weir will be less infested with tourists than opposite the theatre
j. There may be other anglers...
k. ...I will kill them that bar my way, and use their flesh for bait
l. I arrive
m. I cast out
n. I catch a dace
o. I catch a perch
p. I catch a bleak
q. It's very small
r. need loads of them
s. they are not so easy as I'd been led to believe, catch one every ten minutes or so...
t. I work hard
u. and harder
v. An hour passes
w. I don't have enough
x. two hours gone
y. had enough, pull the net
z... 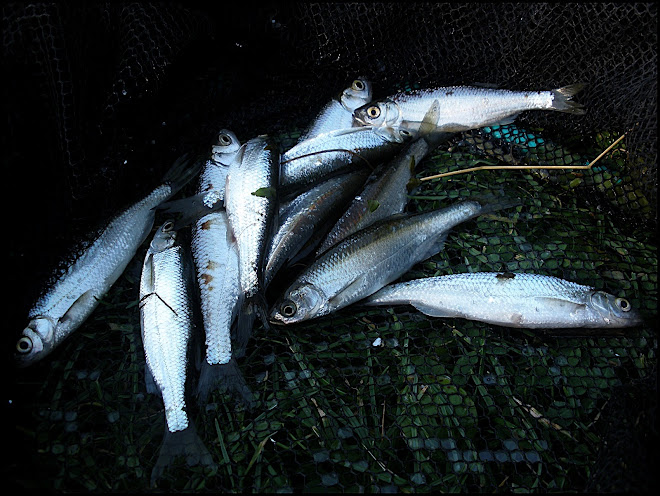 I put the eleven fish in a carrier bag and hang it on the pre-zeroed scales... Judy arrives from town with a picnic and a bottle of red. Transpires that tomorrow she has more business in town and therefore I have the luxury of a yet another day's fishing. The fella one swim down has had a couple of good bream and a stack of unwanted perch whilst I've been grinding out my bleak point, on ledgered double red maggot.

Email ThisBlogThis!Share to TwitterShare to FacebookShare to Pinterest
Labels: Bleak